'They Are Brilliant Minds; Why Malign Them For Their Views?' : CJI On Criticism Against Farm Laws Committee 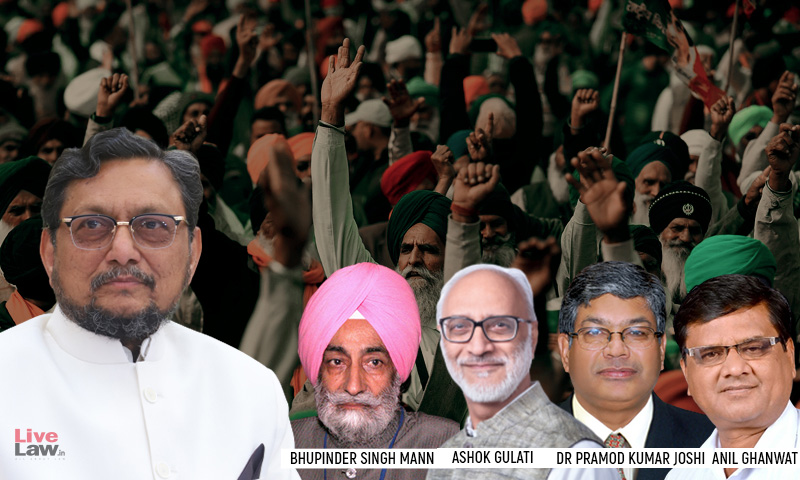 The Chief Justice of India on Wednesday expressed unhappiness at the public criticism against the members of the committee constituted by the Supreme Court to negotiate on the farmers protests.The CJI orally remarked that "unnecessary aspersions" were cast on the committee members and they were "maligned" just because they had expressed certain views in the past on the farm laws."Aspersions...

The Chief Justice of India on Wednesday expressed unhappiness at the public criticism against the members of the committee constituted by the Supreme Court to negotiate on the farmers protests.

The CJI orally remarked that "unnecessary aspersions" were cast on the committee members and they were "maligned" just because they had expressed certain views in the past on the farm laws.

These remarks were made while considering an application filed by Bharatiya Kisan Mahapanchayat seeking the reconstitution of the committee on the ground that the members have expressed views supporting the implementation of the farm laws.

Taking exception to this, the CJI observed :

"How can you play with people's reputation like this? We have serious objections in they being called biased and in saying court was having an interest. You malign people according to majority opinion?"

The CJI also expressed disappointment with the newspaper reports against the committee members.

"We are very sorry to see the kind of opinions expressed in newspapers", he said.

"The basis of your application is that all four people are disqualified. How do you come to that conclusion? They are brilliant minds in the field of agriculture. They are experts. How do you malign them because they have expressed some views in the past?"

The CJI said that "men of integrity" can change their opinions after hearing an opposite view.

"Every judge and lawyer have expressed some views in past and are doing something different now. Does it not happen that people change their opinions after hearing contradictory point of view? Men of integrity do that"

"We don't understand this. The Supreme Court appoints a committee and their reputation is torn to shreds!", the CJI exclaimed.

The CJI clarified that the Committee has not been given powers to adjudicate and is appointed only to assist the Court.

"Committee was asked to listen to protesters and give us a report. Where is the question of bias in that?," the CJI asked.

Nevertheless, the CJI-led bench proceeded to issue notice on the application of Bharatiya Kisan Mahapanchayat. The bench noted that there is a vacancy in the committee following the resignation of BS Mann.

Senior Advocate Dushyant Dave and Advocate Prashant Bhushan, who represent the eight farmers union which have been added as respondents in the case against protests, told the bench that their clients do not wish to participate in the committee proceedings. These Unions do not want to discuss amendments in the laws as they are demanding total repeal, Dave and Bhushan told the bench.

The bench recorded this in the order and stated that these eight unions have nothing to say on the application seeking reconstitution of the committee.

"Farmer Unions Will Not Appear Before Committee, They Are Totally Convinced That Farm Laws Need To Be Repealed": Dave, Bhushan Tell Supreme Court

Yesterday also, the CJI had orally said that a persons' past views will not disqualify him from being a part of a court-appointed committee.

"Just because a person has expressed a view on the matter, that is not a disqualification to be a member of a Committee", the Chief Justice of India orally observed yesterday while hearing another case.

'Just because a person has expressed a view, that is not a disqualification to be a member of committee', Chief Justice of India orally says while hearing a case. The remarks assume relevance in the context of controversy over committee constitution on farmers protests. https://t.co/7e1ltByr94

The Supreme Court on January 12 stayed the operation of three farm laws untill further Orders and constituted the Committee for the 'purpose of listening to the grievances of farmers relating to the farm laws and views of the government to make recommendations'.