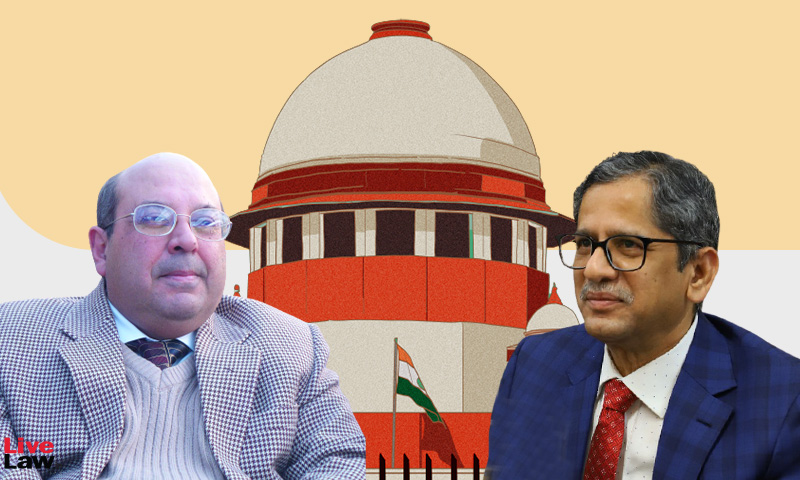 "With Brother Justice Nariman's retirement I feel like I am losing one of the lions which guarded this Judicial institution", the Chief Justice of India NV Ramana said today, during the farewell reference for Justice RF Nariman"One of the strong pillars of the contemporary judicial system, he is a man of principles and is committed to what is right. I'm sure there are many more chapters left...

"With Brother Justice Nariman's retirement I feel like I am losing one of the lions which guarded this Judicial institution", the Chief Justice of India NV Ramana said today, during the farewell reference for Justice RF Nariman

"One of the strong pillars of the contemporary judicial system, he is a man of principles and is committed to what is right. I'm sure there are many more chapters left to be written in professional life of Brother Nariman", the CJI added.

CJI stated that Justice Nariman was the fifth counsel ever to be directly elevated to SC Bench from the Bar. As a judge of the Supreme Court he has disposed of nearly 13565 cases.

"With judgements like Shreya Singhal, his opinion in Puttaswamy, he has left an indelible mark on jurisprudence of this country. His judgements reflect his clarity of thought and scholarly approach. This institution will surely miss his knowledge intellect." CJI said

Solicitor General Tushar Mehta, the first person to speak at the farewell reference, said that it was a special day particularly for him as Justice Nariman was the first counsel he briefed at the Supreme Court.

Senior Advocate Vikas Singh, President of the Supreme Court Bar Association said that Justice Nariman's farewell is a mixed feeling for him. He stated that the entire institution should be grateful to Justice Lodha who recommended Justice Nariman to Supreme Court. Any term of tenure would not be enough for Justice Nariman.

Mr Shivaji Jadhav, President of Supreme Court Advocates on Record Association, said that he shared the sentiments of the others and Justice Nariman will be missed. He added that Justice Nariman has delivered more than 500 reported judgments and it is known that once the verdict was reserved he did not take more than two or three days to dictate the judgment as he was very sharp

Senior Advocate Dushyant Dave said that Justice Nariman was not only a popular judge but also an absolute symbol of very fair and compassionate judge who was equally kind to every lawyers particularly to the young bar.

"May I extend an invitation to Justice Nariman on behalf of Supreme Court cafeteria association that he may visit the cafe and share a coffee with all of us once normalcy retires." Senior Advocate Siddharth Dave said, in a lighter vein.
The reference witnessed an overwhelming response from different sections of the bar.

Sr Adv K V Vishwanathan : Your lordship has adorned the precinct of this court for over 42 years. As an opponent, we used to fear him. But he was with us, it was a source of strength. As a judge your contribution is enormous. I hope your lordship outshines your contributions by your own post retirement writings.

"You were someone who was a God to us when we joined the profession and you continue to rise the pedestal above and above." ASG Bhati said.

Senior Advocate P Narasimha said that Justice Nariman's personality is crystal clear, and is an aspect of his personality which others will try to emulate.

"Whatever aspects your lordships have taken, you have excelled. We have seen you as a friend, lawyer, judge, and jurist. You have set an example in all these fields." Mr. Narasimha said.

While offering his 'salutations' to Justice Nariman, Senior Advocate R Basant said "As a judge you have thoroughly enjoyed your work"

Senior Counsel Arijit Prasad thanked Justice Nariman on behalf of all young members of the bar and said that everyone has benefited from his advice and blessings.

"I have seen Justice Nariman as a junior lawyer, as a senior counsel and as a judge. It was such a change from a lawyer to a judge and the patience with which he heard everybody, he never cut short anyone." He said