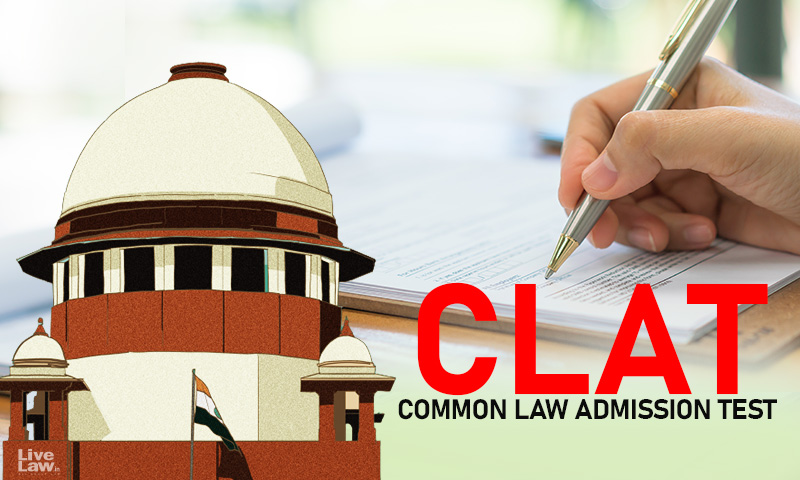 The Supreme Court on Tuesday dismissed a Special Leave Petition filed by a minor boy who secured All India Rank 30 in the OBC category in CLAT but was treated as a general candidate because he had accidentally selected the creamy layer option instead of the non-creamy layer while filling out his form.

Senior Advocate Meenakshi Arora appearing for the petitioner submitted before the bench of Justices SK Kaul and AS Oka that the student, who is currently in Class XII made a mistake while filling out his form despite having attached a caste certificate which specifically stated that he was from the non-creamy layer.

While not being inclined to allow the petition, Justice Kaul orally remarked, “How does the SLP lie? You’ve argued at length before the High Court. The High Court has asked the Grievance Committee to consider your case. No time fixed in this order. Now what do we do in this order..Sorry.”

Arora argued that the petitioner boy is an extremely meritorious child. She further submitted, “This young boy has learnt very early in his career to read his document carefully.”

Submitting further, Arora argued, “Today only the first round of counselling are over. Year after year we have seen that not all the seats in the OBC category are filled. The second round will begin soon . If there are any OBC seats left over in that then may I please be considered. Because this is the premier most institute in the country.”

Justice Kaul further added, “Only appropriate course of action for you now is moving HC, file an application in these proceedings… saying second round of counselling is going to happen, etc.”

Arora again submitted, “May your lords consider this...I am urging on behalf of this young child whose aspirations will be dashed…I would have certainly qualified for a seat at NLS Bangalore based on my score and rank, but for this mistake. It is a mistake that has been committed. It’s a rectifiable mistake….my application is accompanied with a caste certificate. It is a case of obvious error.”

Justice Oka then remarked, “Look at the consequence. If we allow your application then one student who filled his form rightly will lose out”

Arora responded and said that she was only seeking orders for being considered in case a vacant seat arose and nothing else.

Justice Kaul responded and said, “We will not say you should be considered. We can't give a direction that you must be accommodated. No...Thankyou.”

The bench then passed the following order, “This is a case where we find it difficult to proceed merely on sympathies, as much as we have the same. The petitioner, young student of 17 years, belonging to the OBC category (non-creamy layer) obtained All India Rank of 481 in General category and AIR rank 30 in OBC in CLAT 2023. However he made a crucial mistake while filling the form. He informed that he belonged to creamy layer even though he uploaded the certificate where it was stipulated that he was not part of the creamy layer. This mistake has cost the candidate heavily, as despite his merit if he is treated as a creamy layer, then the benefit of reservation would not be available. The petitioner made a grievance about the same and then filed a writ petition Before the Punjab And Haryana High Court at Chandigarh. Perusal of order shows that after arguing at length, counsel for Petitioner confined the grievance to application pending before the grievance redressal committee constituted by the consortium of NLU's to be considered on sympathetic grounds...Respondent submitted that the application would be considered and decided expeditiously as per law. Petitioner has filed said SLP against the said order. We put to learned counsel for the petitioner that the impugned order does not specify the timeline for his application to be decided. Be that as it may, the grievance redressal committee has to take a call so that if the petitioner is successful, the relief does not become illusionary. We are informed that the first round of counselling is over and the next round is now on 27th. We call upon the grievance redressal committee to take a call on the representation in time so that on the petitioner succeeding is not denied relief if he is successful since seats may be available. We note that the petitioner would to get admission in some law school but wants NLSIU Bengaluru.”

After passing the orders Justice Kaul orally remarked, “Only sympathy Jurisdiction at this point. It is a hard case.”

Justice Oka remarked, “It will be chaotic if we allow even one such plea.”

Case Title: Arjun v. Consortium of National Law Universities And Others SLP(C) No. 1752/2023