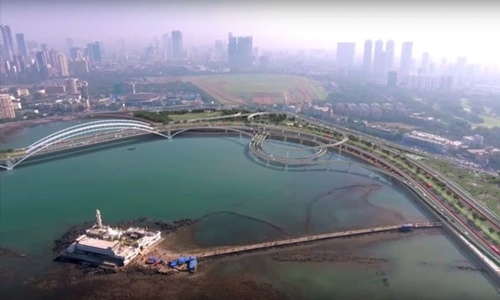 The Bombay High Court has set aside the Coastal Regulation Zone (CRZ) clearance granted to southern part of the coastal road project by the Maharashtra Coastal Zone Management Authority (MCZMA), Expert Assessment Committee (EAC) under the Ministry of Environment and Forest (MoEF) as well the Ministry of Environment and Forest.Allowing the petitions filed by various citizen groups...

The coastal road proposed to be constructed by MCGM to ease traffic congestion in the city of Mumbai. It starts from Prince Street Flyover which is about 1 km from Tambe Chowk on Marine Drive and moves northward through a tunnel beneath Malabar Hill and Nepean sea Road. The tunnel opens at the seashore near Priyadarshini Park from where reclamation commences till the Worli-Bandra sea link is reached at Worli. From the Bandra side of the sea-link the road proceeds further north towards Versova. The proposed total length of the coastal road is around 35.56 km from north to south Mumbai. Around 168 hectares of coastal stretch, mostly rocky shore, is being reclaimed.

Municipal Corporation of Greater Mumbai invited objections to the said project as CRZ-2011 requires public consultations while preparing the Coastal Zone Management Plan Maps, and one principal objection was that the existing CRZ 2011 prohibited reclamation of land to construct a road.

MCGM appointed Frischmann Prabhu to analyse the representations received and submit appropriate remedial measures. Said peer review report pointed out various issues and deficiencies regarding the coastal road project and the DPR studies conducted for the project. Learned Senior Counsel drew the attention of the Court to the under noted crucial finding of Frischmann Prabhu report (with the grievance that the neither MCZMA nor MoEF addressed themselves to the same). The crucial findings referred to in the report read:

(i) That the EIA does not include an environmental and social data sheet or screening checklist;

(ii) No studies have been undertaken regarding the impact of the project on surface, sub-surface and aquatic flora and fauna that will be permanently displaced by the project corridor or any mitigation measures in respect thereof.

(iii) That the Environment Management Plan (EMP) for the Coastal Road Project does not include various material elements such as a management plan for reclamation area, coastal protection and soil erosion management;

(iv) No formal risk assessment study to mitigate the risk of flooding has been undertaken. The report pointed out that information regarding high flood levels for a period of at least the last 50 years is required to be examined and included in the EIA report and that detailed hydraulic modeling would be required; and

(v) That the Social Impact Assessment Report was insufficient and inconclusive inter-alia because it did not incorporate public consultation at different locations with different groups, social survey information and mapping of common property resources.

Appearing for the petitioners, Senior Counsel Janak Dwarkadas submitted that for the northern side of the project, i.e., from Bandra to Versova, the corporation had to obtain environmental clearance because of the order passed by the National Green Tribunal on February 19, 2015. However, it is inconceivable that one segment of this coastal road would require environmental clearance and the other segment will not, Dwarkadas said.

Senior Counsel Gayatri Singh also appeared for one of the petitioners and said that even though, an Assessment Study was conducted, it did not address any concern of the local fishermen community even though they were the most affected by the project. Since no public hearing for social impact study was conducted, no consultation was affected with the fishermen community or the petitioner society. The extent of damage caused to the ecology of the area and the livelihood of the fishermen cannot be effectively ascertained in the absence of a proper study in said regard, she submitted.

MCGM's lawyer, Senior Advocate Darius Khambatta the 2015 amendment to CRZ 2011 by which land reclamation has been permitted in CRZ areas for the construction of roads only in exceptional cases can therefore not be stated to be contrary to the object and purpose of the Environment (Protection) Act.

He further argued that in the context of CRZ 2011, `exceptional cases' has to be construed as compelling and rare cases, where the circumstances, the public interest and the need to construct a road on reclaimed land outweighs the interest in prohibiting land reclamation. It is only in such cases that the MoEF is to grant CRZ permission.

"We highlight that there is a reference that on an environmental concern, the Joint Technical Committee had received inputs from the Director National Institute of Oceanography who was a member of the Committee. In turn, he had sought advice from a team formed at CSIR-NIO comprising experts in marine biology, geophysics, coastal regulations, ocean engineering and physical oceanography. No such material was placed before us during the hearing.

That apart, a perusal of the JTC report shows that it highlighted the terms of reference:

(i) to examine various options in the construction of a coastal road;

(ii) to evaluate options on the basis of technical feasibility and environmental impact and impact on the neighourhoods and to recommend the best options,

However, we note that the discussions on the environmental impact is a minimal. The probable reason is that there was no scientific data before the JTC that is why, as noted in paragraph 8 above, JTC itself highlighted the requirement of further studies."

"The Central Government could have taken two distinct routes. As in the case of the airport at Navi Mumbai, after conducting the necessary studies and determining the impact on the environment, considering that the airport at Mumbai had reached the saturation level and another airport was needed; in light of the detailed environmental studies conducted, a decision was taken that construction of the airport was of such public utility that it outweighed the interest of the public in ecology;

The other route was to simply amend CRZ-2011 by providing for an exceptional case warranting consideration for grant of approval, stipulating in the rule itself that whether or not a particular proposal would fall as an exceptional case to be decided with reference to impact of the project on environment at the stage of granting approval. In the instant case, the second route has been followed."

"The Public Interest Litigations and the Writ Petition are accordingly disposed of restraining MCGM from executing the works required to lay down the coastal road. While upholding the Notification dated 30th December 2015 amending CRZ-2011, but holding that the clearance granted under CRZ-2011 by MCZMA, EAC and MoEF are illegal for the reasons given herein above, we quash the approval granted by MCZMA on 4th January, 2017, the approval granted by EAC on 17th March 2017 and the final approval granted by MoEF on 11th May, 2017. We further declare that MCGM cannot proceed with the works without obtaining an environmental clearance under EIA Notification. Further, permission under Wildlife (Protection) Act, 1972 would also be obtained by MCZMA."