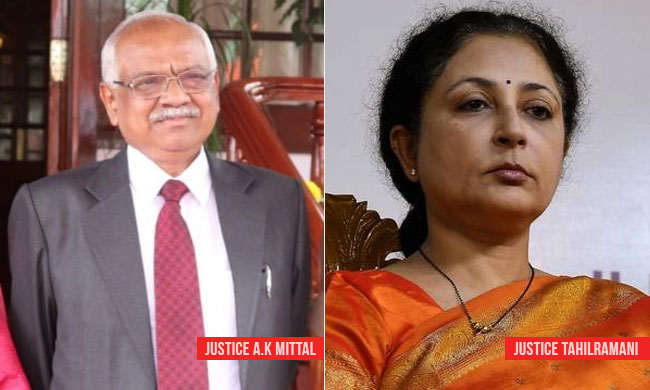 The Chief Justice of Meghalaya High Court, Justice A K Mittal, has also been proposed to be transferred to Madras HC. He had sworn in as the CJ of Meghalaya HC nearly three months ago, on May 28, 2019.

The collegium consisting of CJI Ranjan Gogoi, Justices Bobde, Ramana, Arun Mishra and Nariman in a meeting held on September 3 rejected the representation made by Justice Tahilramani requesting to reconsider the transfer proposal, which was originally made on August 28.

The collegium said that "it is not possible to accede to her request", while reiterating the proposal.

Justice Tahilramani, who became a judge of Bombay High Court in June 2001, was appointed as the Chief Justice of Madras High Court in August 2018.

Before judgeship, she had served as a public prosecutor in Bombay High Court since 1990, and had appeared in many landmark cases such as Bharat Shah's trial. As a judge, she had presided the bench which delivered sentence in the Bilkis Bano case arising out of Gujarat riots. The trial of that case was transferred to Maharashtra from Gujarat by the Supreme Court.

Meghalaya High Court has a sanctioned strength of three judges.

Justice Ajay Kumar Mittal became the judge of Punjab and Haryana High Court in January 2004, after practicing law for nearly 24 years. He was sworn in as the Chief Justice of Meghalaya High Court on May 28, 2019.

Read the resolution of transfer of Justice Tahilramani

Read the resolution for transfer of Justice A K Mittal