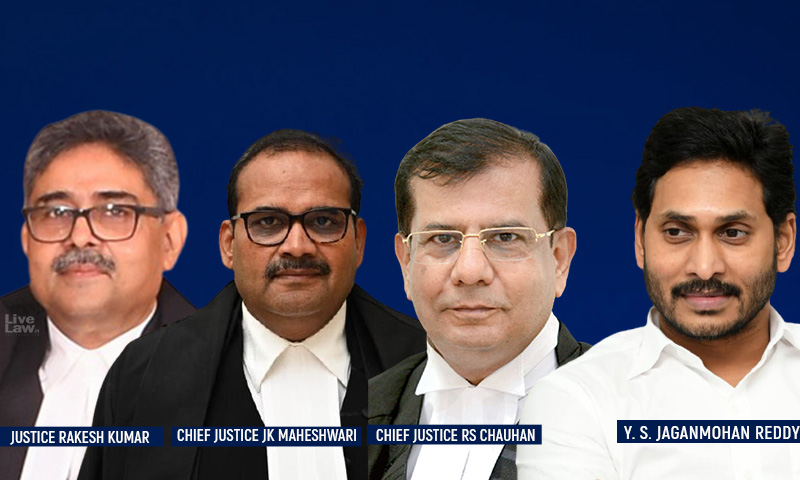 In a curious development, a judge of the Andhra Pradesh High Court has passed an order with critical observations against the proposals made by the Supreme Court collegium to transfer the Chief Justices of High Courts of AP and Telangana.In an order passed on Wednesday, Justice Rakesh Kumar sought to draw a connection between the transfer proposals of the SC collegium and the bombastic...

In a curious development, a judge of the Andhra Pradesh High Court has passed an order with critical observations against the proposals made by the Supreme Court collegium to transfer the Chief Justices of High Courts of AP and Telangana.

In an order passed on Wednesday, Justice Rakesh Kumar sought to draw a connection between the transfer proposals of the SC collegium and the bombastic letter shot by AP Chief Minster Jagan Mohan Reddy to the Chief Justice of India with allegations against the state judiciary.

While adding that he was not raising any questions at the collegium proposals, Justice Kumar observed that transfer of High Court Judges or its Chief Justices "may reflect some transparency".

"After all, they are also holding Constitutional post like member of Hon'ble Supreme Court Collegium", he added.

Justice Kumar observed that by sending the "unceremonious letter" to the CJI, the Chief Minister has "succeeded in getting undue advantage at the present moment".

"People may draw an inference as if after the so called letter of Hon'ble Chief Minister, the two Chief Justices, i.e., Chief Justice of High Court for the State of Telangana and Chief Justice of High Court of AP have been transferred", Justice Kumar observed. The judge observed that with the transfer, the prosecution in the criminal cases against Jagan Mohan Reddy will be hampered. The Supreme Court has directed the High Courts to monitor the prosecution of criminal cases against ministers and legislators.

"By the said transfer, naturally, the cases pending in the Court of Special Judge for CBI cases in Hyderabad against Sri Y.S.Jagan Mohan Reddy, present Chief Minister and others may be delayed and monitoring by the Hon'ble Supreme Court in W.P (Civil) No.699 of 2016 may hamper for the time being. Similarly, by the transfer of Chief Justice of AP High Court, the Government of Andhra Pradesh is bound to get undue benefit", the judge remarked.

These observations were made by Justice Rakesh Kumar while rejecting an application made by the State Government seeking his recusal from a division bench hearing a case. The Additional Advocate General, Sudhakar Reddy, alleged in the application that Justice Kumar had taken a biased stand against the government. It was alleged in the application that Justice Kumar made an oral observation during a previous hearing that "We will declare there is break down of constitutional machinery in the State and hand over administration to the Central Government".

Certain newspaper reports were annexed with the application to support the allegation that the judge had made such oral remarks. However, Justice Kumar denied making any such remark and said that he was merely expressing doubts about the legality of the move of the government to auction public land for private bidders. He rejected the allegations of bias and came down heavily on the government for seeking his recusal.

While rejecting the application, Justice Rakesh Kumar made sharp observations against the State Government and the Chief Minister. It may be recalled that Justice Rakesh Kumar was presiding the bench which sought to examine if there was a 'breakdown of constitutional machinery' in the state of AP. The proceedings in that case has been stayed by the Supreme Court on an appeal made by the State Government. While issuing the stay order, the Chief Justice of India orally observed that the HC proceedings were 'disturbing'.

Justice Kumar has observed in the order that these proposals were made 'after publicizing of the contemptous' letter of the Chief Minister to the CJI. The judge observed that after the collegium made the transfer proposal, CJ Maheshwari stopped the hearing in the cases challenging the three capital decision of the government, which Justice Kumar called the "brainchild of the Chief Minister".

"After his(CJ Maheshwari) transfer, there is every likelihood that some time may be consumed in reconstitution of the Bench and thereafter from zero hearing in those cases may commence", the order raised a concern.

"I am not raising any question on the transfer of Hon'ble Chief Justices, either of the High Court of Andhra Pradesh or of the High Court for the State of Telangana, but, at the same time, I am constrained to observe that transfer of High Court Judges or its Chief Justices may reflect some transparency and for betterment or upliftment of the administration of justice. After all, they are also holding Constitutional post like member of Hon'ble Supreme Court Collegium", the order added.

It may be noted that the Attorney General for India has observed that the letter of Jagan Mohan Reddy was "contemptuous" in nature. However, the AG declined sanction to initiate criminal contempt against Jagan observing that it was not proper for him to interfere when the CJI was seized of the contents of the same.

Observations against the Chief Minister

The judge mentioned in the order that he got "disturbing information" about the Chief Minster after searching ""Khaidi No.6093" in Google. Then the judge went on to extract the screenshots of newspaper reports about the corruption allegations against Jagan Mohan Reddy, which were returned after a Google search of "Khaidi No 6093".

"Till the publication of letter, dated 06.10.2020, of the Hon'ble Chief Minister of Andhra Pradesh, I was not having much information about him. But, immediately thereafter, I became curious to know about him. Subsequently, I was told that if I go on site 'Google' and type only "Khaidi No.6093", I can get many information. Accordingly, I did the same thing and thereafter I got very disturbing information. Some of such extracts I got downloaded are quoted herein below", the judge said in the order.

The order then went on to enumerate the 30 criminal cases pending against Jagan Reddy. It was noted that police has closed many cases citing lack of evidence. This, the judge said, reflected "how head of the Police, i.e., the Director General of Police, Government of Andhra Pradesh, is functioning as per the dictate of the Government, not in upholding rule of law in the State".

"Is it not a mockery with the system?", the judge asked referring to the delay in the prosecution against the Chief Minister.

"I am well aware that many of my observations made herein above may not be in consonance with the technicality, but since on the verge of my retirement, my impartiality has been questioned by the Government of Andhra Pradesh on my face in the present proceeding, in my defence, I was constrained to record above facts, which are based on record and may not be disputed. My only endeavour is to uphold the majesty of law", the judge added.

The judge made a further notable observation against the acceptance of post-retirement assignments by judges:

"I am of the opinion that for a situation, which is prevailing, today in which impartiality, integrity, honesty, unbiased etc., in judicial system is being raised, to some extent we are also responsible. Several instances we have noticed that immediately after demitting the office of Judge, the Judges are provided with new assignment. If we start to restrict our expectation of reassignment/re-employment at least for a period of one year after retirement, I don't think that any political party, even party in power can undermine the independence of judiciary and we may be in a position to uphold the majesty of law without being influenced by any one".

The judge rejected the recusal application by terming it an attempt to "malign the image of one of the members of the bench".

"If Court starts entertaining such petitions; in no case, the Court can be allowed to dispense justice. With a view to uphold the majesty of law and repose the confidence of citizen in the judicial system, such endeavour made by the State is considered as malicious and cannot be approved. If such petitions are entertained, it will amount to allowing the party for hunting the Bench. Such an action by the State was not expected, but in this State, as I have observed the circumstances herein above, everything can be possible. However, at the same time, the Court cannot be frightened by any such action of the State".

The application was filed on the basis of an affidavit on oath made by Mr. Pravin Kumar, Special Officer, Mission of A.P, I.T Towers, Mangalagiri, Guntur District/Mission Director, Mission Build Andhra Pradesh, Government of Andhra Pradesh.

The allegations in the affidavit were discarded as "untrue" and "false" amounting to "perjury".The bench ordered the initiation of criminal proceedings for perjury against the officer and issued show-cause notice for contempt action against him.

He is retiring from service tomorrow.