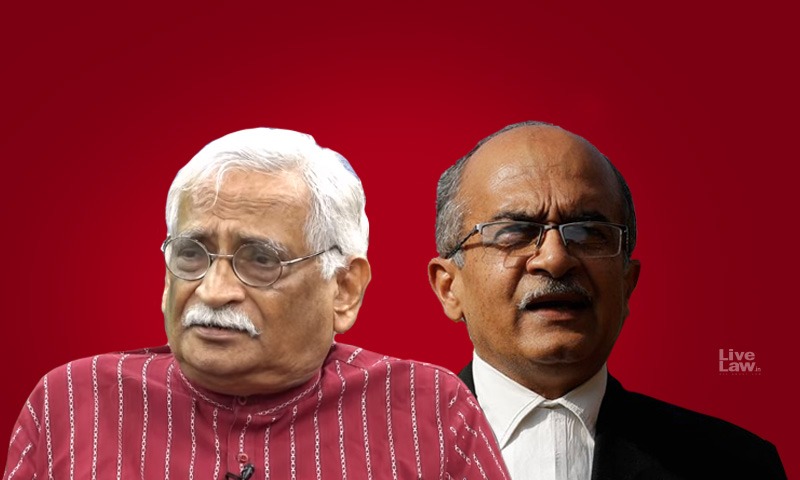 "Bhushan's comments were opinion made in good faith founded on true facts," submitted Senior Advocate Dr. Rajeev Dhavan in his written submission filed before the Supreme Court on sentencing of Advocate Prashant Bhushan, in the contempt verdict. Dhavan has averred that Bhushan was denied the defence of 'truth' which is mandatory in law, and has thus urged the Top Court to...

"Bhushan's comments were opinion made in good faith founded on true facts," submitted Senior Advocate Dr. Rajeev Dhavan in his written submission filed before the Supreme Court on sentencing of Advocate Prashant Bhushan, in the contempt verdict.

Dhavan has averred that Bhushan was denied the defence of 'truth' which is mandatory in law, and has thus urged the Top Court to recall the convicting judgment suo moto. He has further averred that no sentence should be imposed on Mr. Bhushan, in any event, merely for making bonafide remarks.

The crux of the submissions is as follows;

(i) Bhushan's comments were opinion made in good faith founded on true facts.

(iii) In the present controversy similar comments are made by Justices Lokur, Kurian Joseph and A.P. Shah, Arun Shourie and others in the public domain and reported by newspapers and TV. It would follow that they were all in contempt

(iv) There should not be any attempt to coerce the contemnor into making on apology on the basis that nothing else would be acceptable.

On August 14, a 3-judge bench of the Supreme Court had held Bhushan guilty of contempt of court for his tweets against the SC and the Chief Justices of India. The Supreme Court had posted the matter for sentencing on August 20 however, it granted two-three days time to Mr. Bhushan to reconsider his statements. The matter will now be taken up tomorrow, August 25.

Senior Advocate Dhavan has submitted that the Supreme Court refuted Bhushan's claim that in recent years the Supreme Court, especially the last 4 Chief Justices have contributed to the destruction of democracy "without examination", even though a detailed affidavit was placed before the Court.

He has stated that 'Truth' is an absolute defence in any contempt proceeding and thus, the 'truth value' of Bhushan's tweets must be assessed.

He pointed out that Bhushan's affidavit was "fully backed up" by details and materials on how and why Bhushan came to his opinions, which led to the contempt verdict. However, the same was not examined and it needs to be examined at this state of sentencing in compliance with Section 13(b) which states that it can be raised "in any proceedings".

He emphasized that similar comments about the SC have been made by Justices Lokur, Kurian Joseph and A.P. Shah, Arun Shourie and others in the public domain and reported by newspapers and TV. It would follow that they were all in contempt. On this basis, the Attorney General has also counselled against punishment in the present case.

He is also concerned by procedural irregularity in the contempt proceedings inasmuch as the Supreme Court did not supply a copy of the complaint made against Mr. Bhushan, despite the mandate under Rule 6 (2) of the Rules to Regulate Proceedings for Contempt of the Supreme Court, 1975.

"The Supreme Court failed to do so even after Bhushan filed an application for the same…The implications of this are far reaching because Bhushan and the public are entitled to know whether the complaint was malafide or even personally or politically motivated," he submitted.

Further, he has submitted that Section 13 (a) of the Contempt of Courts Act requires that the Court "is satisfied that the contempt is of such a nature that it substantially interferes, or tends substantially to interfere with the due course of justice". The terms 'is satisfied' and 'substantially' are not mere incantations but place a responsibility on the Court to examine the extent of interference and be fully satisfied, Dhavan said.

"In Prashant Bhushan's case no such inquiry has taken place and the court has assumed that what he said was contempt as interfering with justice. This is a failure of the Court's obligation which goes towards denying the passage of any sentence," he submitted.

He added, "The very jurisdiction of contempt and scandalizing as enunciated in this case convicting Mr. Bhushan is vague and colonial."

It is a fundamental principle of criminal law, he said, that the offence must be clear "without ambiguity". However, the offence of criminal contempt for scandalizing the court is
"notoriously vague".

"It has not been defined anywhere by statute (Section 2(c)(i)) or by judgments. It has rightly been called a 'vague and wandering' jurisdiction….an undefined or ambiguously defined offence has to be handled with care, and used only in extreme cases…Words like 'scurrilous' or 'shocking the conscience' are meaningless…," the submission read.

He further pointed out that the SC's verdict in the contempt case sought succour from judgments in National Lawyers Campaign for Judicial Transparency v. Union of India (2019) SCC Online 411 and Vijay Kurle (2020) SCC SC 407 as precedents "without distinguishing their facts".

Citing a plethora of judgments, Dhavan argues that the tests for holding a person guilty of contempt are very "rigourous". For instance, he submitted, in the case of Baradakanta Mishra (1976) 3 SCC 327, the Supreme Court had held,

"criticism based on an obvious distortion or gross mis-statement and made in a manner 13 which seems designed to lower respect for the judiciary and destroy public confidence in it, cannot be ignored"

In the present case however he stated, the convicting judgment is "cut paste" with so many quotations is that it's "true worth as ratio is lost" and becomes unbalanced and contradictory.

Lastly, Dhavan has argued that any contempt arising from speech can only be restricted by way of reasonable restrictions under Article 19(2) framed by law, for contempt. He has argued against the use of Article 129 (Supreme Court to be a court of record) of the Constitution to punish Mr. Bhushan.

To hold that Article 129 give a carte blanche to the Supreme Court to impose any punishment (different from or exceeding the maximum prescribed under the Contempt of Courts Act) would mean that the Supreme Court acting under 129 can ride rough shod over Article 19(1)(a) read with Article 19(2) which could never have been the intended."

The only way to harmonize Article 129 with Article 19, Dhavan argues, would be to say that while the Supreme Court as a court of record would enjoy inherent powers to punish for other contempt such as disobedience of courts order or interference with court proceedings and could possibly impose a punishment different from what is prescribed by the contempt of courts Act, it cannot do so when it comes to punishment for contempt for speech.

The submission has been filed through Adovcate Kamini Jaiswal.

During the course of hearing on August 20, Dhavan had highlighted that the "nature of the person (contemnor)" should also be taken into consideration, during sentencing.

Two factors are important for sentence, he submitted: 1. Nature of offence and 2. Nature of person/ contemnor

He emphasized that the character and contributions of Advocate Prashant Bhushan, who had undertaken numerous pro bono cases in his career to bring about judicial reforms and ensure access to courts must be taken into account for the purpose of the sentence.

He added that the Court must consider the nature of Mr. Bhushan and assess, whether he was attacking the court or is criticizing it for improving the administration of justice.

It may be noted that Mr. Bhsuhan has refused to tender an apology with respect to the statements. In a supplementary affidavit filed before the Supreme Court, Bhushan said that the remarks made by him were a "constructive criticism" of the Court and therefore, retracting the same would amount to tendering and "insincere apology".

'My Statements Are Well Considered And Well Thought Of': Prashant Bhushan Declines SC's Offer For Time To Reconsider Statement