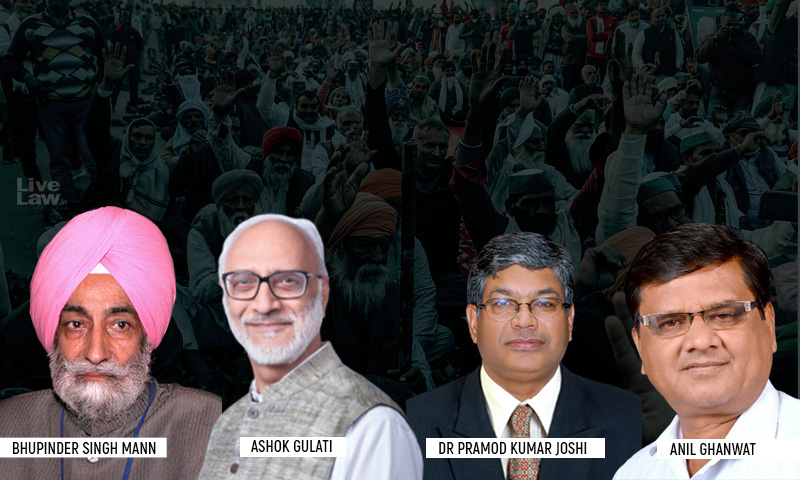 The Supreme Court on Tuesday constituted a 4 member committee for the purpose of holding talks between the Central Government and the farmers to resolve the protests over the three contentious farm laws.A notable feature of the composition is that all four members have expressed open views in support of the implementation of the farm laws.Bhupinder Singh Mann, National President, Bhartiya...

The Supreme Court on Tuesday constituted a 4 member committee for the purpose of holding talks between the Central Government and the farmers to resolve the protests over the three contentious farm laws.

A notable feature of the composition is that all four members have expressed open views in support of the implementation of the farm laws.

Shri Bhupinder Singh Mann,who was a former MP of the Rajya Sabha, had in December led a delegation which met the Union Agriculture Minister to demand the implementation of the three laws, with certain amendments.

"Reforms are needed in order to make agriculture competitive. But safeguards are needed to protect farmers, and anomalies must also be corrected," he had said.

Mann's organization BKU was part of the protests at the beginning.

As per another report, the act of Mann meeting the Minister was not appreciated by other protesting farmers, who accused the government of trying to 'divide and defame' their movement, while 'sweet-talking' them into conceding amendments in the laws.

Dr Pramod Kumar Joshi, recently co-authored an article in the Financial Express which said "any dilution in the farm laws will constrain Indian agriculture to harness emerging global opportunities".

While strongly supporting the merits of the laws, the article said that "farmers are a victim of misinformation in the absence of effective communication from the government".

"It seems that some activists and political elements (who presumably would like to keep the disquiet alive for a long time) have hijacked the agitation by colouring the farm laws with a distorted narrative", the article stated.

Ashok Gulati has argued in an article written in the Indian Express that the farm laws are in the right direction. He commented that the opposition has been misguided. He said that the laws will "make Indian agriculture globally competitive, and benefit farmers and consumers alike".

Also, in an interview given to Karan Thappar for 'The Wire', Gulati repeatedly made it clear that he supports the government's agricultural reforms which he believes are very necessary. He suggested the suspension of the farm laws for 6 months to compensate the farmers but strongly argued against total repeal of the laws.

Soon after the Chief Justice of India announced the names orally today afternoon, many persons pointed out in social media that the composition of the committee reflects only a single view which is in support of the laws.

The recent positions of the members of committee by SC on farm bills:
Ashok Gulatihttps://t.co/AwrpliqEEB

The composition of the Committee with members who support the implementation of laws have baffled many.

However, the composition of the four member committee is puzzling and sends contradictory signals

The Supreme Court said in its order that the committee is "constituted for the purpose of listening to the grievances of the farmers relating to the farm laws and the views of the Government and to make recommendations".

The Committee, which has been asked to hold its first sitting within 10 days, has to submit its report within 2 months to the Supreme Court. The top court has stayed the implementation of the farm laws until further orders.

The SC also observed that "the representatives of all the farmers' bodies, whether they are holding a protest or not and whether they support or oppose the laws shall participate in the deliberations of the Committee and put forth their view points".

However, the protesting farmers had said on Monday itself that they will not participate in the talks held by the Committee.

The 'Samyuktha Kisan Morcha' issued a statement late on Monday night saying that while all organizations welcome the suggestions of the SC to stay the implementation of the farm laws, they are collectively and individually not willing to participate in any proceedings before a committee that may be appointed by the SC.

The farmers unions, in their joint statement, said that the talks before the committee will be fruitless in view of the attitude taken by the Centre before the Court on Monday that it will not repeal the three farm laws.

"Looking to the attitude and approach of the Government which made it clear before the court today repeatedly that they will not agree to the discussion for repeal before the committee", they said.

After the Supreme Court's order, the farmers groups reiterated their stand.

We had said yesterday itself that we won't appear before any such committee. Our agitation will go on as usual. All the members of this Committee are pro-govt and had been justifying the laws of the Government: Balbir Singh Rajewal, Bhartiya Kisan Union (R) https://t.co/KE9vMGUKjl pic.twitter.com/n2FFh5oj9k

Bharatiya Kisan Union's (R) Balbir Singh Rajewal reportedly said all the members of the committee, that has been constituted, are "pro-government and had been justifying the laws of the government

"We are against the committee on principle. It is the government's way to distract attention from the protest," he said.

Another farmer leader Darshan Singh said they will not appear before any committee, adding Parliament should discuss and resolve this issue.

"We don't want any external committee," he said.