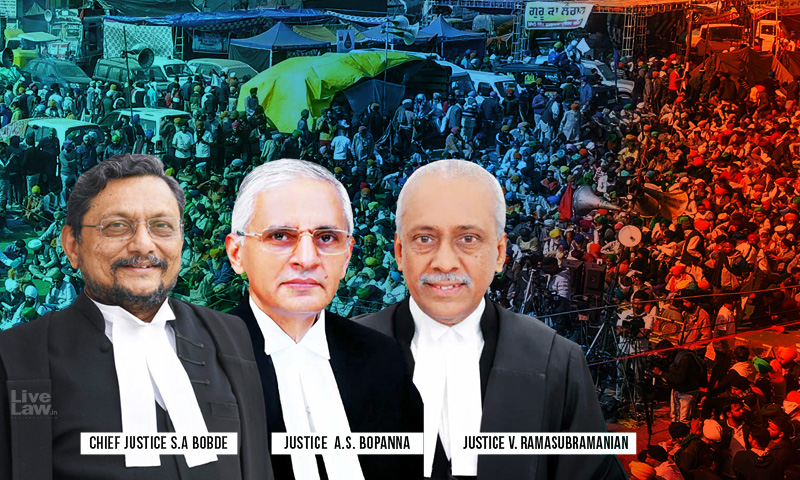 "We are going to suspend the implementation of the three farm laws until further orders. We will also constitute a Committee," the Supreme Court said today while hearing a batch of petitions challenging the Farm Laws/ seeking removal of protesting farmers from Delhi borders.The bench headed by the CJI said that it will suspend until further orders the implementation of the contentious...

"We are going to suspend the implementation of the three farm laws until further orders. We will also constitute a Committee," the Supreme Court said today while hearing a batch of petitions challenging the Farm Laws/ seeking removal of protesting farmers from Delhi borders.

The bench headed by the CJI said that it will suspend until further orders the implementation of the contentious farm laws-'Farmers' Produce Trade and Commerce (Promotion and Facilitation) Act, 2020', Farmers (Empowerment and Protection) Agreement of Price Assurance and Farm Services Act, 2020' and Essential Commodities(Amendment) Act, 2020.

The CJI SA Bobde also mentioned the names of Agricultural economist Ashok Gulati, Bhupinder Singh Mann, President BKU and All India Coordination Committee, Pramod Kumar Joshi( Director South Asia international Food Policy), Anil Ghanwat (Shethkari Sangathan) to be the members of the Committee, that is expected to resolve the deadlock between Government and protesting farmers. A complete order will be released by the Court, by the end of the day.

"We believe in the Committee and we are going to constitute it. This Committee will be the part of judicial proceedings", the Top Court said.

The Bench also comprising of Justices AS Bopanna and V. Ramasubramanian, said that it will not hear an argument that farmers are unwilling to go to the Committee.

"We are looking to solve the problem. If you want to agitate indefinitely, you can. Every person who is genuinely interested in solving the problem is expected to go before the Committee. The Committee will not punish you or pass any orders. It will submit a report to us. We are going to take the opinion of the organizations. We are forming the Committee so that we have a clearer picture," the CJI said.

The development comes in the backdrop of the protesting farmers unions expressing their unwillingness to participate in the negotiation talks before a committee proposed by the top court.

The 'Samyuktha Kisan Morcha' issued a statement late on Monday night saying that while all organisations welcome the suggestions of the SC to stay the implementation of the farm laws, they are collectively and individually not willing to participate in any proceedings before a committee that may be appointed by the SC.

The farmers unions, in their joint statement, said that the talks before the committee will be fruitless in view of the attitude taken by the Centre before the Court on Monday that it will not repeal the three farm laws.

"Looking to the attitude and approach of the Government which made it clear before the court today repeatedly that they will not agree to the discussion for repeal before the committee", they said.

Farmers' lands will be protected during negotiations

The CJI assured that the Court will stay the implementation of the legislation and shall protect farmers' land, but the same shall be done if the farmers agree to participate before an Independent Committee.

"We will pass an interim order saying the no farmers land can be sold for contract farming...We are concerned about only the validity of the laws and also about protecting the life and property of citizens affected by protests. We are trying to solve the problem in accordance with the powers we have.

We have the power to suspend the legislation. But the suspension of legislation must not be for an empty purpose. We will form a Committee which will submit a report to us," the CJI said.

In response to these concerns, the Solicitor General Tushar Mehta pointed out that Section 8 of the Farmers' Produce Trade and Commerce (Promotion and Facilitation) Act provides that no farming agreement shall be entered into for the purpose of transfer, sale, mortgage etc while contract farming. No structure can be erect.

Further, Section 15 of the Act provides that no action for recovery of any amount shall be initiated against the agricultural land. Farm land is completely immune from attachment.

Solicitor General : Section 15 says no action for recovery of any amount shall be initiated against the agricultural land. Farm land is completely immune from attachment.

Senior Advocate Harish Salve, appearing for the Government also submitted that laws do not provide for selling of farmers' land and that the apprehensions in this regard are baseless.

The Top Court further declined the farmers request that the Prime Minister himself should approach them to hold negotiations.

"We cannot ask the Prime Minister to go. He is not a party here," the CJI said. He was also informed that the Agriculture Minister has already held talks with the farmers, but in vain.

The top court had indicated yesterday that it will stay the implementation of the laws and will form an independent committee to resolve the deadlock between farmers and the Centre.

During the hearing on Monday, the Chief Justice of India had made sharp critical comments against the Central Government for passing the laws "without enough consultation" and for not having resolved the farmers protests, which had been going on since November 26 near Delhi borders.

The CJI also made it clear that the court will not pass any direction to stop the protests so long as they continue in a peaceful manner. The CJI further expressed concerns over the presence of large number of old people and women among the protester, amid the harsh winter and the COVID19 pandemic, and urged the lawyers representing the unions to persuade them to return to their villages.

The CJI also pulled up the Centre for not having responded to the suggestion made by the Court before Christmas vacations to put on hold the implementation of laws to facilitate talks.

The Attorney General  opposed the Court's intervention by saying that a legislation cannot be stayed. The CJI replied that staying executive actions under the law and staying the law were different things.

The Centre filed an affidavit later in the day claiming that the farmers on the nation were happy with the laws except for some groups of protesters from Punjab. It also said that the laws were the product of deliberations of over two decades by experts for reforms of agricultural markets.

The Centre also blamed that certain non-farmer elements were spreading a deliberate wrongful perception about the laws which is creating misgivings in the minds of farmers. It further said that the farmers unions came for talks with a "per-occupied mind" only with a 'Yes' or 'No' options regarding the repeal of laws without considering any middle path.

Other stories about today's hearing :