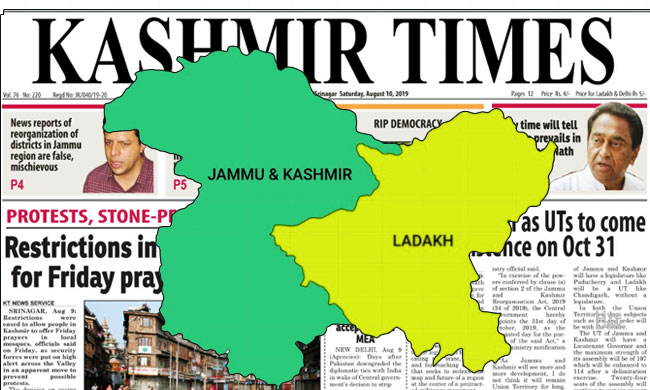 The Foundation for Media Professionals (FMP) has moved an intervention application before the Supreme Court of India in support of the petition filed by Anuradha Bhasin, Executive Editor of the newspaper daily, Kashmir Times. In her petition, Ms. Bhasin had challenged the shutdown of communication services and curbs on media freedom that were imposed in Kashmir in the wake of...

The Foundation for Media Professionals (FMP) has moved an intervention application before the Supreme Court of India in support of the petition filed by Anuradha Bhasin, Executive Editor of the newspaper daily, Kashmir Times.

In her petition, Ms. Bhasin had challenged the shutdown of communication services and curbs on media freedom that were imposed in Kashmir in the wake of abrogation of the state's special status. The bench of CJI Ranjan Gogoi, Justices S. A. Bobde and Abdul Nazeer had adjourned hearing in the matter and listed it for today, i.e., September 16.

Notably, last month, the Press Council of India had also sought intervention in the proceedings as a Respondent party. However, on facing opposition from its members, it publically took a stand to support the petition.

The present intervention application has been filed by FMP's president, Paranjoy Guha Thakurta, through Advocate Astha Sharma, with unanimous support from the society. FMP is a registered society, which was set up in 2008 to protect media freedom and promote quality journalism. In an official press release, the society stated that the application is aimed at ensuring that press freedom is upheld and journalists are allowed to freely discharge their duties.

"The threadbare facilities provided to the media in Srinagar are not only inefficient but also have the risk of surveillance for journalists and media organizations that wish to report without fear or favour and to their sources who need equal protection in order to share information in public interest and for the public good", read the press release.

In its application, the society averred that the communication shutdown in the valley, which operates till date, has directly and inevitably extinguished "constitutionally protected" freedom of speech and expression of journalists. It submitted that "press is the fourth pillar of democracy, and journalists perform the function of a watchdog, especially during times when rights and freedoms might be at stake".

The Applicant has taken a critical view of the Media Facilitation Centre which was established only after a week from when the communication shutdown was first imposed in the valley, on August 5. The Centre has only four computer systems, a single mobile phone and extremely slow speed of internet, thereby making the journalists wait for long hours to establish communication, it said.

Citing the Supreme Court's verdict in Express Newspapers v. Union of India, 1959 SCR 12, the society submitted that "any measures which take away freedom of the press and force journalists to rely on government aid are unconstitutional".

The Applicant has also alleged that the "curfew" under Section 144 of CrPC was arbitrarily employed against journalists, with only a selected number of journalists being favored with "curfew passes". Moreover, it has been alleged, that there has been an increase in manhandling and arrests of journalists, attributable to this communication blockade in the valley.

The application mentions the procedural safeguards against communication blockade of journalists enlisted in Section 419A of the Telegraph Rules, 1951, to assert that journalistic communication had been granted a high degree of protection since pre-independence era.

The application also states that the impugned shutdown not only affects freedom of journalists but also impedes dissemination of information by restricting citizens' "right to acquire knowledge" about major political and social events under Article 19(1)(a) of the Constitution. Reliance has been placed on Re: Swapnil Tripathy v. Supreme Court of India, (2018) 10 SCC 639. Attention has further been drawn to the statement of UN Special Rapporteur, David Kaye, who termed the complete communication shutdown in Kashmir as "disproportionate encroachment" on the right to impart and receive information. Allegations have also been made that the government has rather indulged in issuing statements contradictory to the ground reality of the valley.

The Applicant has further stated the impugned communication shutdown is opposed to India's international obligations. Reliance has been placed on Article 19(2) of International Covenant on Civil and Political Rights, 2016 Report on Freedom of Expression and the Private Sector in the Digital Age, etc.

It has also been submitted that as per the 2006 Joint Declaration on Publishing Confidential Information and Impunity in Cases of Attacks Against Journalists, there is a need for free flow of information and accurate reporting, rather than communication shutdown, in "regions experiencing unrest".

FMP has lastly contended that prolonged restriction of the rights guaranteed under Article 19(1)(a) and 19(1)(g) of the Constitution, without any "mandatory system of independent review", could not be characterized as reasonable under Article 19(2) and 19(6) and as per the "proportionality standard" endorsed by the Apex Court in K. S. Puttaswamy v. Union of India, (2017) 10 SCC 1, the burden is upon the State to demonstrate that the communication shut down is necessary and that there is no other less restrictive alternatives available.