'Consensual Affair' Is Not A Defence Against A Charge Of Kidnapping A Minor: Supreme Court 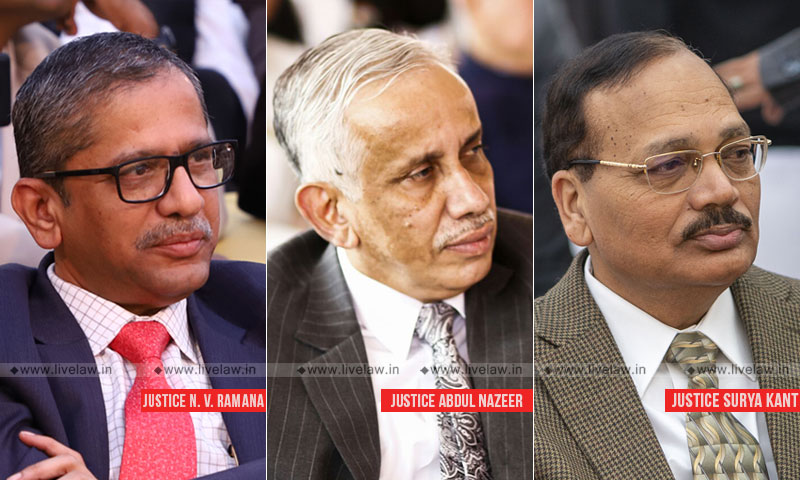 The Supreme Court has observed that the a 'consensual affair' is not a defence against the charge of kidnapping a minorA minor girl's infatuation with her alleged kidnapper cannot by itself be allowed as a defence, for the same would amount to surreptitiously undermining the protective essence of the offence of kidnapping, the bench comprising Justices NV Ramana, S. Abdul Nazeer and Surya...

A minor girl's infatuation with her alleged kidnapper cannot by itself be allowed as a defence, for the same would amount to surreptitiously undermining the protective essence of the offence of kidnapping, the bench comprising Justices NV Ramana, S. Abdul Nazeer and Surya Kant said while disposing an appeal filed by one Anversinh whose conviction under Sections 363 and 366 of the Indian Penal Code was upheld by the Gujarat High Court.

Before the Apex Court, it was contended that the parties (accused and the Prosecuterix) were in love owing to which the prosecutrix had left her parents' home and gone with him at her own free will. Thus, the bench considered the issue whether a consensual affair can be a defence against the charge of kidnapping a minor?

To answer this contention, the bench referred to Sections 361 to 366 of IPC which define 'Kidnapping from Lawful Guardianship' and consequential punishment. The court said:

"Perusal of Section 361 of IPC shows that it is necessary that there be an act of enticing or taking, in addition to establishing the child's minority (being sixteen for boys and eighteen for girls) and care/keep of a lawful guardian. Such 'enticement' need not be direct or immediate in time and can also be through subtle actions like winning over the affection of a minor girl. However, mere recovery of a missing minor from the custody of a stranger would not ipso­facto establish the offence of kidnapping. Thus, where the prosecution fails to prove that the incident of removal was committed by or at the instigation of the accused, it would be nearly impossible to bring the guilt home."

"It bestows the ability to make crucial decisions regarding a minor's physical safety upon his/her guardians. Therefore, a minor girl's infatuation  with her alleged kidnapper cannot by itself be allowed as a defence, for the same would amount to surreptitiously undermining the protective essence of the offence of kidnapping. Similarly, Section 366 of IPC postulates that once the prosecution leads evidence to show that the kidnapping was with the intention/knowledge to compel marriage of the girl or to force/induce her to have illicit intercourse, the enhanced punishment of 10 years as provided thereunder would stand attracted.

The court said that, in the instant case, the evidence on record unequivocally suggests that the accused induced the prosecutrix to reach at a designated place to accompany him. "His core contention appears to be that in view of consensual affair between them, the prosecutrix joined his company voluntarily. Such a plea, in our opinion, cannot be acceded to given the unambiguous language of the statute as the prosecutrix was admittedly below 18 years of age.", the court added.

The accused had placed reliance on the judgment in S. Varadarajan v. State of Madras (1965) 1 SCR 243  in which it was held that a charge of kidnapping would not be made out only in a case where a minor, with the knowledge and capacity to know the full import of her actions, voluntarily abandons the care of her guardian without any assistance or inducement on part of the accused. In this regard, the bench said:

"The cited judgment, therefore, cannot be of any assistance without establishing: first, knowledge and capacity with the minor of her actions; second, voluntary abandonment on part of the minor; and third, lack of inducement by the accused. 18. Unfortunately, it has not been the appellant's case that he had no active role to play in the occurrence. Rather the eye­witnesses have testified to the contrary which illustrates how the appellant had drawn the prosecutrix out of the custody of her parents. Even more crucially, there is little to suggest that she was aware of the full purport of her actions or that she possessed the mental acuities and maturity to take care of herself. In addition to being young, the prosecutrix was not much educated. Her support of the prosecution version and blanket denial of any voluntariness on her part, even if presumed to be under the influence of her parents as claimed by the appellant, at the very least indicates that she had not thought her actions through fully. It is apparent that instead of being a valid defence, the appellant's vociferous arguments are merely a justification which although evokes our sympathy, but can't change the law. Since the relevant provisions of the IPC cannot be construed in any other manner and a plain and literal meaning thereof leaves no escape route for the appellant, the Courts below were seemingly right in observing that the consent of the minor would be no defence to a charge of kidnapping. No fault can thus be found with the conviction of the appellant under Section 366 of IPC."

Regarding the sentence, the bench noted that 1) no force had been used in the act of kidnapping 2)there was no preplanning, use of any weapon or any vulgar motive. Although the offence as defined under Section 359 and 361 of IPC has no ingredient necessitating any use of force or establishing any oblique intentions, nevertheless the mildness of the crime ought to be taken into account at the stage of sentencing, the court said. Also taking note of other factors, the bench reduced the quantum of sentence to the period of imprisonment already undergone by the accused.