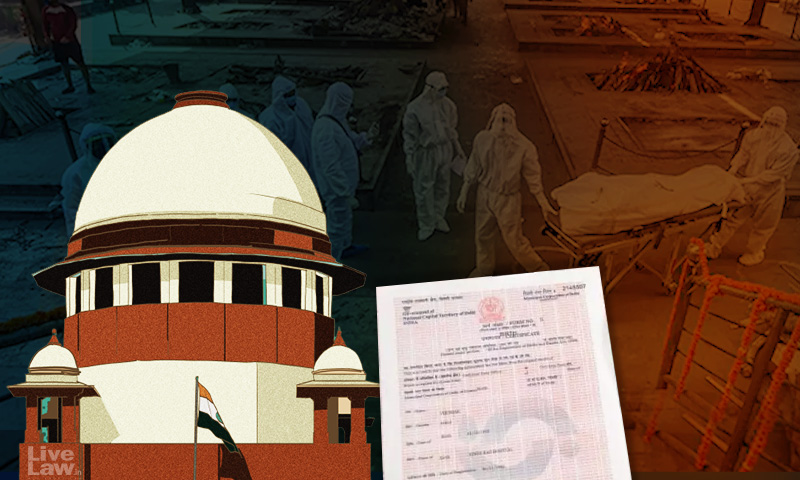 The Supreme Court on Monday asked the Centre to revisit its decision of not including death by suicide as Covid- 19 death even if COVID-19 is an accompanying condition.A bench comprising Justices MR Shah and AS Bopanna was considering the fresh guidelines issued by the Union Ministry of Health and Family Welfare to simplify the process of issuance of death certificates, as per the directions...

The Supreme Court on Monday asked the Centre to revisit its decision of not including death by suicide as Covid- 19 death even if COVID-19 is an accompanying condition.

A bench comprising Justices MR Shah and AS Bopanna was considering the fresh guidelines issued by the Union Ministry of Health and Family Welfare to simplify the process of issuance of death certificates, as per the directions in the judgment delivered on June 30.

As per the said guidelines, deaths occurring due to poisoning, suicide, homicide and deaths due to accident, among others, will not be considered as COVID-19 deaths even if COVID- 19 is an accompanying condition.

These guidelines were placed on record before the Supreme Court through a compliance affidavit filed on September 11.

"We've gone through your counter and it seems to be okay. However there are 2/3 things that we want to point out", Justice Shah told Solicitor General Tushar Mehta.

"What about the persons who committed suicide while they were suffering from Corona?", Justice Shah asked. The judge said that exclusion of suicides where COVID was an accompanying condition cannot be prima facie be accepted. "You have to re-consider this", Justice Shah told the SG.

The bench also raised the following other queries :

The Bench has also asked Centre to also look into the certificates that have been issued already and the remedy that would be available to the family members in case they have disputes with regards to the cause of death.

The Top Court has also asked the Union to apprise the Court about the compliance with respect to the guidelines that are to be issued by the National Disaster Management Authority for determination of compensation.

Solicitor General Tushar Mehta assured that the guidelines for determination of compensation would be in place before the next date of hearing which is September 23, 2021.

The bench was hearing a contempt petition filed seeking compliance of the June 30 judgment which directed framing of guidelines for the grant of compensation for people who died due to COVID and issuance of death certificates for them(Gaurav Bansal v.Union of India).

"We have gone through a compliance report submitted by the Union of India. On reading the compliance report, it appears that there are some issues that are to be considered & re- considered & there are some creases that are to be ironed out. For full implementation of directions issued by this court, the issues that are to be re-considered have been told to SG. To get the response on aforesaid issues, list it on September 23. Mr Mehta, the learned Solicitor General, has also submitted that so far as other directions, namely the guidelines that are to be issued for determining compensation u/s 12 of the DM Act as laid down Para 16(1) shall also be complied with within the next date of hearing", the bench stated in the order.

What was the Supreme Court's verdict?

".we feel that the procedure should be as simplified as it can be. Therefore, a simplified procedure/guidelines is/are required to be issued by the Central Government and/or appropriate authority for issuance of an official document/death certificate stating the exact cause of death, i.e., "Death due to Covid-19", to the family members of the deceased who died due to Covid-19", the Court observed.

"For guidance, such guidelines may provide if a person has died after he was found covid positive and he has died within two to three months, either in the hospital or outside the hospital or at home, the death certificate/official document must be issued to the family members of the deceased who died due to Covid-19 stating the cause of death as "Died due to Covid-19". He/she might have died even due to other complications, however, due toCovid-19"

The Court also said that guidelines should provide a remedy to a person who may have a grievance that an incorrect death certificate was issued in respect of a COVID fatality.

"The Appropriate Authority is directed to issue simplified guidelines for issuance of Death Certificates/official document stating the exactcause of death, i.e., "Death due to Covid-19", to the family members of the deceased who died due to Covid-19", the Court directed.

In the same judgment given on June 30, the Court had also directed the National Disaster Management Authority to frame guidelines within 6 weeks for grant of compensation to the dependents of those who died due to COVID. The Court also observed that the process of issuance of death certificates must be simplified.

On September 3, the Court had expressed displeasure at the Central Government for its delay in issuing the guidelines for COVID death certificates.

"By the time you frame the guidelines, the third phase will also be over", Justice Shah had remarked while asking the Centre to file the compliance affidavit by September 11 without fail.