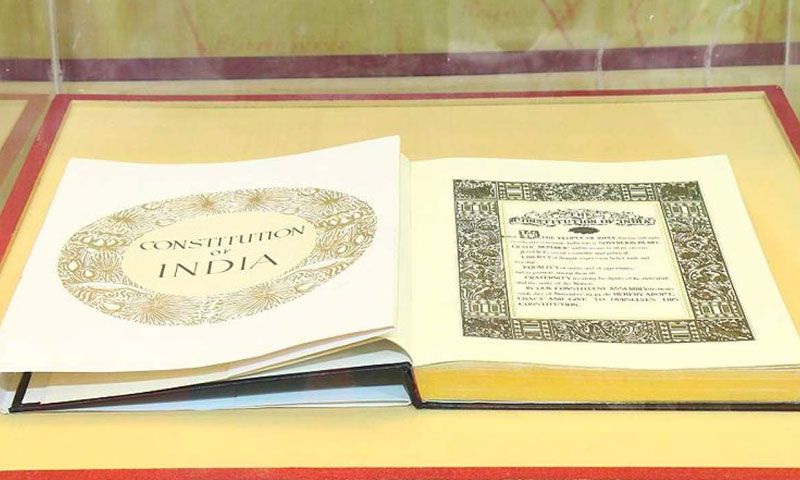 The first Chairman of the Constituent Assembly Dr. Sachchidananda Sinha started his speech explaining the meaning of the Constituent assembly and explaining about the preliminary business before the House such as the election of a permanent President, the framing of the Rules of Business, the appointment of various Committees, and need for formulating a suitable and stable constitution for an Independent India.

He equated his appointment with the time in which "Lord Palmerston found himself when Queen Victoria offered him the highest Order of Chivalry, namely, the Knighthood of the Garter. In accepting the Queen's offer, Lord Palmerston wrote to a friend as follows"

"I have gratefully accepted Her Majesty's gracious offer as, thank God, there is no question of any damned merit about the honour conferred on me."

On the historic day that is 9th December, 1946 Mr. Sinha also read the three messages received from State Officials of America, China and the Government of Australia. And also read few lines to glorify the ancient India. The world has witnessed and understood the importance of Constitution and constituent assembly after the American revolution which successfully laid the foundation of American government in 1789. Similarly, after the second world war a new world order was created that acted as a catalyst to support our long existing freedom struggle movement for Independence. In the year 1945-46 Constituent Assembly came into its existence for making the Indian Constitution. The term constituent assembly is often used in the contexts where the old regime and institutions are deliberately replaced by creating a new system of government.

In India's Context, 9th December 1946 is the historic day with respect to the Constitution of India as this day marked the beginning of the Constituent Assembly of India and its first meeting held in the Constitution Hall, New Delhi on this day. Members took painstaking efforts for drafting the Constitution and setting the progress and development of the nation. For the election of temporary chairman of the Constituent Assembly of India Acharya J. B. Kripalani requested Dr. Sachchidananda Sinha who was oldest among all the existing members and also the oldest parliamentarian in India to take the Chair of the assembly. Dr. Sinha happily accepted the proposal of the assembly.

B.N. Rau in his book 'India's Constitution in the making' has categorically dealt with the historical anecdotes of the Constituent Assembly. On the very first day of the assembly these members signed and presented their credentials in the Register representing various states such as 43 members from Madras, 19 from Bombay, 26 from Bengal, 42 from United Provinces, 12 from Punjab, 30 from Bihar, 14 from C.P. and Berar, 9 from Orissa, 1 each from Sind, Delhi, Ajmer, Coorg and 2 from N.W. F. Province. However, by the end of 31st December, 1947 total number of members reached to 299.

Dr. Sachidanand Sinha in his introductory speech on the very first day defined what is called a Constituent Assembly? According to him, it is the political method of devising a constitution for a country. In Britain, there is no such thing as a constituent law because British Parliament is the sole sovereign authority which has a power to make and unmake all laws, including the constitutional law of the country. He also mentioned to refer the Swiss Constitution by the fellow members of the assembly as it is the oldest republic in Europe. He also asked to read French and specially rely on the US Constitution by the respected members of constituent assembly.

After referring to the constitution-making in Europe and America, the members of Constituent assembly on the very first day that is on 9th December 1946 discussed what Mahatma Gandhi wrote in 1922. Gandhiji said, "Swaraj will not be a free gift of the British Parliament. It will be a declaration of India's full self-expression, expressed through an Act of Parliament. But it will be merely a courteous ratification of the declared wish of the people of India. The ratification will be a treaty to which Britain will be a party. The British Parliament. when the settlement comes, will ratify the wishes of the people of India as expressed through the freely chosen representatives."

From time-to-time demand made by Mahatma Gandhi for a Constituent Assembly, composed of the "freely chosen representatives" of the people of India. In the year 1934, the Swaraj Party, which was then formed at Ranchi in Bihar, adopted the resolution that "This Conference claims for India the right of self-determination, and the only method of applying that principle is to convene a Constituent Assembly, representative of all sections of the Indian people, to frame an acceptable constitution." Which was approved at the Patna in May 1934 by the All-India Congress Committee. Thus, the scheme of a Constituent Assembly for framing the Indian Constitution was officially adopted by the Indian National Congress. However, the above resolution was confirmed at the session of the Congress held at Faizpur in December 1936.

Again, in the month of November, 1939, the Congress Working Committee adopted a resolution which declared that "Recognition of India's independence and the right of her people to frame their constitution through a Constituent Assembly is essential."

Motilal Nehru Report which came in the year 1928 also contributed as one of the preliminary edifices for the formation of the Constituent Assembly. Simon Commission was appointed in the year 1927 to review the working of the Government of India Act 1919 and propose constitutional reforms for India. Similarly, in the year 1925 Lord Birkenhead, then Secretary of State for India, challenged the Indians in the House of Lords by saying that '…let them [Indians] produce a constitution which carries behind it a fair measure of general agreement among the great peoples of India...'. Which was responded by accepting the challenge and by drafting the Nehru Report of 1928. Government of India Act, 1935 acted as blueprint document for the Constituent assembly for the making the Indian Constitution. It was consisting of total of total 321 Articles in toral XIV parts of the Act. Constituent assembly heavily relied on this act and majority of the portions of the final draft Constitution of India, 1950 were taken from this act.

Selection of Members of the Constituent Assembly

The idea of a Constituent Assembly had come to prevail largely as an article of faith in majority of the politically-minded classes in the country after the 1934. In 1936, Congress working Resolutions adopted at the Faizpur session of the Congress and also in the 1939 meeting of the Congress Working Committee, it was discussed that the Constituent Assembly should be elected on the basis of adult suffrage. However, until 1940 the political organization had not favored the idea of a Constituent Assembly as a proper and suitable method for framing a constitution for this country. Members were elected and nominated from Various States and provinces. Because August offer of 1940 by British Government once again supported the need for making a constitution.

For the first time in the year 1946 when the Cabinet Mission Plan came subsequently elections were held for the Constituent Assembly. Constituent Assembly came as a consequence of this Cabinet Mission Plan. The members were elected by the provincial assemblies by a single, transferable-vote system of proportional representation for the Constituent Assembly and total membership was kept at 389, out of which 292 were representatives of the provinces, 93 represented the princely state. However, due to non-cooperation of Muslim League the existing structure was changed. As per 1946 election, total seats that was assigned to the British Indian provinces were 296 out of which Congress won 208, and the Muslim League 73. However, partition led to the failure of the existing scheme and total 299 members were elected for the constituent assembly.

STATEWISE MEMBERSHIP OF THE CONSTITUENT ASSEMBLY OF INDIA AS ON 31 DECEMBER, 1947

The Constituent Assembly of Pakistan was founded on 11th August 1947 with total of 69 members, where Mr. Jinnah in his presidential address to the Constituent Assembly of Pakistan mentioned that "My guiding principle will be justice and complete impartiality, and I am sure that with your support and co-operation, I can look forward to Pakistan becoming one of the greatest nations of the world". This assembly was dissolved in October 1954 by President Ghulam Muhammad due to declaration of emergency. However, Jinnah's dream of making Pakistan as a great nation shattered when the second Constituent Assembly declared Pakistan an Islamic republic and enacted the first constitution in 1956. Jinnah in his first speech in the assembly stated that "Now I think we should keep that in front of us as our ideal and you will find that in course of time Hindus would cease to be Hindus and Muslims would cease to be Muslims, not in the religious sense, because that is the personal faith of each individual, but in the political sense as citizens of the State."

Court's Interpretation on the formation of Constituent Assembly

In the case of Kesavananda Bharati v. State of Kerala, (1973) 4 SCC 225 the issues with respect to power and authority of the Constituent Assembly of frame the Constitution was discussed. Question was whether Constituent represented the people and vested with the legal sovereignty? As per Justice Shelat and Justice Grover in the paragraph 484 of the judgement it was mentioned that by the virtue of section-08 of the Indian Independence Act, 1947 that the Constituent Assembly was vested with the legal authority to frame the Constitution of India. Also, Chief Justice Sikri held that as per section- 6(6) and section-8 (1) of the Indian Independence, 1947 demonstrated that when the Constituent Assembly started functioning. Justice Jagmohan Reddy, Justice Beg and Justice Mathew also confirmed the same. Same was relied in the case of State (NCT of Delhi) vs. Union of India, (2018) 8 SCC 501. As per concurring opinion of Justice Nariman in the popular Aadhar case which held Right to Privacy as the fundamental Right. This landmark case of K.S Puttaswamy v. Union of India (2019) 1 SCC 1, held that it may be correct that Constituent Assembly debates make interesting reading but only to show that what exactly the framers had in mind when they framed the Constitution of India. As Constituent assembly didn't discuss to incorporate Right to Privacy as the fundamental Right which was successfully acknowledged as the Fundamental Right in this puttaswamy case.

Constituent Assembly was formed under the British regime in India so we can't deny the fact that the shadow of British colonialism was not carved on the constitution making process. However, final task of framing of India's Constitution completed in the free and Independent India. Most of the proceedings of the Constituent Assembly Debates took place after the independence i.e post 1947 and our founding fathers and mothers contributed tirelessly throughout this process. Constitution emerges as the mother of all laws and supreme law of the land. Notwithstanding there is need to revisit and review the working of the Constitution and make it more align in the present context and to the changing needs of efficient, smooth and effective system of governance and socio-economic development of modern India.

This herculean task of constituent assembly has resulted into vibrant democracy, economic progress and the social emancipation of society. Effective representation, development of Panchayati Raj institutions and the participation of the people at the grassroots level is the milestone achievements of constitutional framework. This 75th anniversary is an occasion for every citizen of India to renew the pledge to fulfill the aspirations of well-being of our people. There is also a need to bring the interpretation and understanding of the Constitution closer to the common man. This would be possible when our system would be more inclusive and there would be Indianization of judiciary. Having said that, we must acknowledge the importance of liberty, equality and fraternity to achieve the true implications and the canons of propriety which, indeed, are the hallmarks of any pluralistic society. Constitution governs the lives of 130 crore citizens of India and essentially it shall be interpreted to answer to the shifting needs of the society at different point of time.