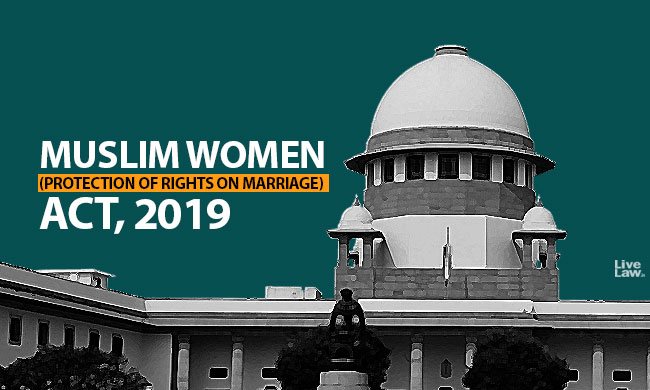 Supreme Court has issued notice on the petitions challenging the constitutional validity of the Muslim Women (Protection of Rights on Marriage) Act, 2019. The bench headed by Justice Ramana agreed to examine the matter after Senior Advocate Salman Khurshid argued that triple talaq had already been declared unconstitutional by the court, and there was no need to criminalise it.Why such...

Supreme Court has issued notice on the petitions challenging the constitutional validity of the Muslim Women (Protection of Rights on Marriage) Act, 2019.

The bench headed by Justice Ramana agreed to examine the matter after Senior Advocate Salman Khurshid argued that triple talaq had already been declared unconstitutional by the court, and there was no need to criminalise it.

Why such a practice can't be criminalised if it is still prevalent? asked Justice Ramana.

The Supreme Court had declared 'talaq-e-biddat' or any other similar form of talaq having the effect of instantaneous and irrevocable divorce pronounced by a Muslim husband, unconstitutional, vide its judgment dated August 22, 2017 in Shayara Bano v. Union of India & Ors., (2017)9 SCC 1.

Subsequently, the triple talaq law- Women (Protection of Rights on Marriage) Act 2019 was passed by the Central government on July31, 2019, criminalizing such pronouncement and prescribing a punishment of up to 3 yrs imprisonment for the same.

Samastha Kerala Jamiathul Ulama, a religious organisation of the Sunni Muslim scholars and clerics in Kerala has filed a petition in Supreme Court challenging the constitutionality of the Muslim Women (Protection of Rights on Marriage) Act, 2019.

The petitioner has submitted in the petition that the Act has introduced penal legislation, specific to a class of persons based on religious identity. It is causative of grave public mischief, which, if unchecked, may lead to polarization and disharmony in society.

"Section 3 is a redundant declaration. There is no purpose, no effect, no point to this provision. The Central Government cannot improve on a declaration of law made by this Hon'ble Court under Article 141 in Shahyara Bano Judgment. A redundant legislation must be regarded a dead letter".

The petitioner also submits that the intent behind the Act is not abolition of Triple Talaq but punishment of Muslim husbands.Section 4 imposes a maximum sentence of 3 years imprisonment when a Muslim husband pronounces Triple Talaq. The offence is cognizable and non-bailable as per Section 7.

"If the motive was to protect a Muslim wife in an unhappy marriage, no reasonable person can believe that the means to ensure it is by putting an errant husband in jail for 3 years and create a non-bailable offence for merely saying "TalaqTalaqTalaq".

Jamiat Ulama-i-Hind Vs Union Of India

The Petitioner is an organization involved in philanthropic activities, including protection of Islamic Culture and has filed the present petition through Advocate Ejaz Maqbool. It has contested the constitutional validity of the Central legislation in terms of Articles 14, 15 and 21 of the Constitution on the following grounds:

That no circumstance requiring the enactment of the Act existed since such a form of divorce had already been declared unconstitutional by the Apex Court. Thereby, such a pronouncement was non est in law and a marriage would subsist even after the said pronouncement. It was further submitted that the Act has also turned a blind eye towards the plight of under trials and the overburdened judiciary by enacting a superfluous Act.

That marriage as per Islamic Law was a civil contract and 'talaq' was a mode to repudiate the contract. Therefore, imposition of a criminal liability for a civil wrong was in clear violation of Fundamental Rights of Muslim men.

That the main object of the Act should have been implementation of the judgment and protection of the rights of married Muslim women rather than imposing punishment for incarceration upon the husband. Such imprisonment of the husband rather feeds upon the scope of reconciliation of the wed lock.

That Desertion, which plagues all the communities, has not been criminalized and thus the Act is discriminatory against Muslim husbands and is, in the absence of an intelligible differentia, violative of Article 14 of the Constitution.

That Section 4 of the Act prescribes imprisonment of upto 3 years which is an excessive and disproportionate punishment in as much as lesser punishments have been prescribed by the law makers for many offences which are far graver, including Rioting, Adulteration of food or drink, etc. It was further submitted in light of Mohd. Arif @ Ashfaq v. The Registrar, Supreme Court of India, (2014) 9 SCC 737, that the notion of 'just deserts' which requires that a sentence being imposed must be proportionate to the offender's culpability is applicable to criminal jurisprudence.

That Section 7 of the Act makes it a cognizable and non-bailable offence while offences like Kidnapping, Causing death by negligence, etc., which are far graver, are bailable offences.

That the Act has departed from the settled position of law that a Court is not bound to issue notice to the Complainant or hear them while exercising powers for grant of bail; since Section 7(c) of the Act stipulates that no bail shall be granted without hearing the Muslim woman upon whom talaq is pronounced.

The petitioner also submitted that "imprisonment of upto 3 years for a pronouncement of talaq having the effect of instantaneous divorce, when the same pronouncement can be lawfully made within a period of three months, without attracting any penal consequences, whatsoever, is not only disproportionate but extremely excessive and stringent, which is completely arbitrary and has no nexus, whatsoever, with the object sought to be achieved, thereby falling foul of Articles 14, 15 and 21".

It has been persuaded that like other Islamic countries, three pronouncements made instantaneously should be regarded only as one pronouncement instead of criminalizing it altogether.

The Petitioner has also disputed Section 6 of the Act which confers the right of custody of minor children on the Muslim woman. This provision has been alleged to be passed without taking into consideration the best interests of the children in as much as it provides an all-encompassing, overarching provision in favour of the wife and does not envisage the existence of any exceptional circumstances where custody may be granted to the Muslim husband or his family.

The petition is filed by politician and Islamic scholar, Amir Rashadi Madni.

The Petitioner has contested the constitutional validity of the Act and has submitted that it is "un-islamic" and is violative of Articles 13, 14, 15, 21 and 25 of the Constitution. The contentions raised in the Petition are enlisted below:

The Petitioner's founding argument was that talaq-e-biddat had already been declared invalid and unconstitutional by the aforementioned judgment of the Supreme Court and it had no sanctity in law. The verdict was binding on all courts of the country in view of Article 141 of the Constitution and thus a legislation criminalizing such talaq was unnecessary.

The Petitioner has further argued that the Act is contrary to the ethos of the Preamble of the Constitution viz. Justice, Liberty, Equality, Fraternity, Individual Dignity and has the potential of suffocating the secular character of the Constitution.

He also submitted that since marriage in Islam is a civil contract, it may be terminated under certain circumstances, as held in Abdul Qadir v. Salima, (1886) 8 All 149. Therefore, imposition of a criminal liability for a civil wrong was in clear violation of Right to life with dignity and personal liberty of Muslim men.

It is also alleged that the Act offends the foundation of equal protection of laws under Article 14 of the Constitution in as much as it is not based on intelligible differentia and threatens to violate the fundamental rights of a class of citizens. Reliance was placed on S. G. Jaisinghavi v. Union of India, (1967) 2 SCR 703.

The Petition also alleges violation of Article 15 of the Constitution as the Act discriminates against a class of persons on the basis of religion whereas as per the settled law, the applicability of criminal laws is religiously neutral.