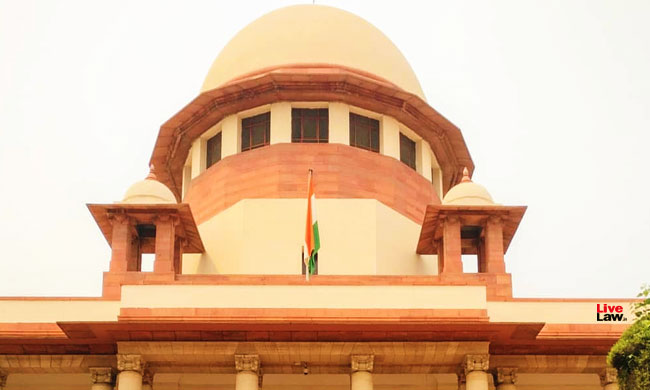 A plea has been filed before the Supreme Court challenging the constitutional validity of Section 8(3) of Representation of the People Act, 1951, (RPA) which stipulates that a legislator shall be disqualified if convicted & imprisoned for more than 2 years. The Petitioner, Ashwini Kumar Upadhyay, who is an Advocate and a social-political activist, has contested the above provision...

A plea has been filed before the Supreme Court challenging the constitutional validity of Section 8(3) of Representation of the People Act, 1951, (RPA) which stipulates that a legislator shall be disqualified if convicted & imprisoned for more than 2 years.

The Petitioner, Ashwini Kumar Upadhyay, who is an Advocate and a social-political activist, has contested the above provision through Advocate Ashwani Kumar Dubey, stating that it was opposed to public welfare and was also violative of Article 14 of the Constitution.

He firstly submitted that Public Servants are disqualified from their services if convicted and sentenced to imprisonment even for two days. Moreover, the candidates for judgeship or for IAS are not considered at all if they have criminal cases pending against them. However, Section 8(3) of RPA protects legislators from disqualification even if they are convicted and sentenced to imprisonment for 2 years, thus creating a "regime of tolerance for criminality" in favour of elected legislators.

Notably, Section 8(3) stipulates that a person convicted of any offence and sentenced to imprisonment "for not less than two years" shall be disqualified from holding the office of a legislator from the date of such conviction.

He contested in this view that Section 8(3) RPA is arbitrary, irrational and offends Article 14 as it fails to create any "rational nexus between what the legislations seeks to attain and the exclusion of elected representatives".

"…government servants and public servants form the same class for the purpose of administration of laws in this country and to ensure that the rule of law prevails. Therefore, measures adopted for the purpose of ensuring probity in the life of public servants cannot be unreasonably extended to only some of the sections of such class, while irrationally bracketing out some others who ultimately belong to the same class. Such a treatment defies the test of nondiscrimination under Article 14…," he submitted.

It was then pointed out that many serious offences under IPC such as food adulteration, keeping a lottery office, wrongfully confining any person, criminal intimidation, rioting, etc. stipulate imprisonment of maximum two years and Section 8(3) of RPA overlooks commission of such serious offences by an MP or MLA and allows legislature to be tainted by convicted individuals.

He submitted that as per a report of National Election Watch and Association for Democratic Reforms, 43% MPs had declared criminal cases against themselves in this Lok Sabha. Moreover, 29% MPs had declared serious criminal cases including cases related to rape, murder, attempt to murder, kidnapping, crimes against women etc. "This interferes with the purity and integrity of the electoral process and pollutes the clear stream of the democratic process", he submitted.

He further submitted that these criminal MPs are usually self-financed and hence cut out the middle man from entering politics. Rather, they use this position to subvert administration of justice and prevent cases against themselves from being concluded or attempt to obtain acquittals.

The Petitioner went on to cite Dinesh Trivedi v. Union of India, (1994) 4 SCC 306, wherein the Apex Court had recommended the setting up a high level committee to consider the Vohra Committee Report (1993) which had expressed severity of the problem and had suggested "electoral reforms to stem the tide of criminals flowing into our polity".

The Petitioner indulged into an extensive discussion on constitutional morality and asserted that institution building was its facet and that the courts had the power to intervene in the matter. Recalling an instance of interference in a similar case, the Petitioner cited Lily Thomas v. Union of India, (2013) 7 SCC 653, whereby the Supreme Court had struck down Section 8(4) of RPA which permitted sitting MP's and MLA's to continue in office if they had filed an appeal within a period of three months after conviction in Legislators with criminal antecedents.