"There Was A Mistake, Certain Pages Of CAG Report Omitted From The Copies Given To Your Lordships": AG Tells SC [Rafale Courtroom Exchange] 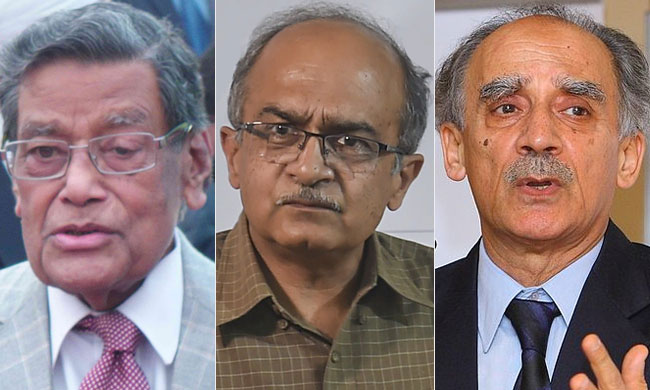 "There has been a mistake. In the copies of the CAG report given to Your Lordships, certain pages had been omitted. It is important because why the price was redacted from the report is mentioned in it. Any disclosure of the price would violate the IGA (Inter-governmental Agreement between India and France)", said Attorney General K. K. Venugopal at outset as the hearing on the review petitions against the December, 2018 Rafale verdict began in the Supreme Court on Thursday.

As the AG proceeded to argue the Centre's affidavit claiming privilege under section 123 of the Evidence Act in respect of certain file-noting of the Indian Negotiating Team as sought to be relied upon by the petitioners, Justice S. K. Kaul inquired, "What privilege are you claiming? They have already produced it in the court"

"According to us, they have produced it by stealing it and therefore, it cannot be called into question in court. We can claim privilege only to get rid of it...", replied the AG.

He drew the bench's attention to the said section 123 prohibiting one from giving any evidence which is derived from unpublished official records pertaining to the affairs of the State, and Article 19(2) which permits the freedom of speech to be curtailed in the interest of the sovereignty and integrity of India, the security of the State and friendly relations with foreign States.

Besides, he relied on section 8(1)(a) of the RTI Act, which excludes from the obligation of disclosure Any information which would prejudicially affect the sovereignty and integrity of India, the security, strategic, scientific or economic interests of the State, or its relation with a foreign State. He also Indicated sections 3 and 5 of the Official Secrets Act (OSA) which prescribe the punishments for obtaining and communicating any "secret official code or password, or any sketch, plan, model, article or note or other document or information".

At this point, Justice K. M. Joseph pointed out that by virtue its section 22, the RTI Act is given an overriding effect over the OSA, and that while its section 24(1) excludes from its purview certain intelligence and security organisations specified in the Second Schedule to the Act (like the Intelligence Bureau, the RAW, the BSF and the CRPF ), the exemption would not apply where the information sought pertains to the allegations of corruption and human rights violations.

"If the information asked for is in respect of corruption, then you are bound to give it even in cases where information is not usually given...When the Parliament has passed the RTI Act, it has brought about a complete revolution! It has put us ahead of Australia and the US! Let us not go back! Now Article 74(2) remains the only area which cannot be inquired into...", observed the judge.

"if I am sitting in the government's seat, I may agree to not go back. But this is a statute...so far as 24 is concerned, the exception has to be confined to the scope of the exception...the security of the state supersedes everything else through the protection under 19(2). The RTI Act says give this information, You have an exception saying don't give this, And an exception to the exception saying that, in case of corruption, give it. But here corruption is not contemplated to be the subject of the RTI application. Your Lordships would be adding to the Schedule that way...", submitted the top law officer.

"In 2009, Your own government has said that file notings have to be shown unless covered by section 8. After S. P. Gupta's case, notings have lost their sanctity", weighed in Justice Joseph.

In his turn, Advocate and petitioner-in-person Prashant Bhushan regarded the Centre's preliminary objection as malafide-

"The AG said that these documents belong to a class that he calls defence secrets, which affect the security of the country and which can't be relied upon, examined or even looked at by the court. He further said that these have been obtained in violation of the OSA. Earlier, He said they were stolen and now, he says they are unauthorised photocopies. Thirdly, he said that the source where these documents were procured from has not been disclosed. And now he is claiming privilege...The intention of the objection is not to prevent harm to national security. Because virtually all these documents have already been published and are available in public domain since a very long time. Hence, that their consideration by the court in a judicial proceeding would lead to some harm is an untenable argument"

"In the constitution bench judgment in S. P. Gupta, it was held that the test to determine whether a claim of privilege should be allowed is only a test of public interest. The RTI Act also provides in its Section 8(2) that notwithstanding the OSA, access to information may be allowed if public interest outweighs the harm to the protected interests. Section 123 (of Evidence Act) refers to unpublished documents. How can privilege be claimed where documents are already in public domain?", Mr. Bhushan continued.

"(The aim of the preliminary objection) is the protection of officials who have misled the court. The Union of India has not even filed an FIR for the stolen documents. Of course I understand that the AG didn't mean they were stolen but probably photocopied and leaked, but A responsible government would have commenced proceedings under the OSA. The respondent could not even say when the incident (of theft) took place!"

"Stories on there being no sovereign guarantee, or the seat of arbitration (being Geneva), or the lack of approval of the Defence Acquisition Council and the deal being instead referred to the Cabinet Committee on Security were published in 'The Wire' as early as November 18. No efforts were made to restrain the media then. From time-to-time, the government itself leaked information to the friendly media, like certain file notings of the raksha mantri. That The preliminary objection is an an afterthought becomes clear on just that ground!", argued Mr. Bhushan.

"The AG says it is a matter of defence procurement and hence, it would affect national security? But even the CAG report deals with a large number of defence purchases! Not one, not two, but ten! And all kinds of details have been mentioned in the CAG report...In not one case, other than this purchase of rafale jets, have any details of pricing ever been redacted! And it was in November last year when the government claimed that the CAG report will be given and that it will be a redacted version! Why? The CAG doesn't redact information normally! How did they know in advance?"

In response to this contention, the AG advanced, "we have committed to a government-to-government agreement under which these details cannot be disclosed at all. We have requested for this information to be redacted otherwise we would be in breach of the contract with France"

As Mr. Bhushan countered that a written answer stating the price was submitted in the Parliament by the government, Chief Justice Ranjan Gogoi reminded him to confine himself to the preliminary objection.

"(When the original petitions were heard on November 14 last year), I had annexed a note to my rejoinder that was also marked secret. But the AG had responded to the note and admitted that there is no sovereign guarantee! As the source was not disclosed even then, the objection should have been taken at that stage! I had said it is not a government-to-government arrangement because there is no sovereign guarantee, and the AG had replied, saying that there is letter of comfort! Why the objection now to the note showing unauthorised parallel negotiations by the PMO?", continued Mr. Bhushan.

" If the government of India itself doesn't know the source of the media (in the Ministry of Defence), how can the petitioners?", he asked. He also pointed out section 15(2) of the Press Council Act by virtue of which no newspaper, news agency or journalist can be compelled to disclose the source of any news or information published.

Mr. Bhushan indicated how even in the 2G case, where he had filed in evidence the entry register of the home establishment of the then-CBI Director Ranjit Sinha, saying that he was handed the same at his residence the night before by some unknown persons, the court had initially asked him to disclose the source in a sealed cover. But when it was iterated that the NGO CPIL had unanimously resolved to not reveal the identity of the source who had relayed the information to the counsel in confidence, the order to declare the source had been recalled and Sinha had been directed to recuse from the investigations in the 2G cases.

Similarly, in the Coal-gate scam, when the NGO Common Cause had procured a CBI notesheet, the apex court had reflected that though It is true that the secrecy of investigation has to be maintained, but if somebody accesses documents that the CBI should have protected, it is difficult to find fault with them or the whistle-blower, particularly when it is in public interest.

He also placed reliance on the American case of Pentagon papers, where the government had sought to restrain the New York Times from publishing details on the US military operations during the Vietnam War and the court had rejected its plea in a very emphatic judgment. "In the US, the freedom of speech is wider than in India! But Our RTI is stronger than their Freedom of Information Act", said Mr. Bhushan.

"Once a document is published, what is the public interest in saying that though the public knows about it, the court cannot look into it for deciding a case even if the document is relevant?! Such an argument is unstateable!", he pressed.

"None of the documents we have annexed have anything to do with national security. They pertain to violations of procedure which We have already shown", he rested his case.

Next, Senior Advocate Vikas Singh made a brief submission for petitioner Vineet Dhanda- "'unpublished official records', for the purpose of section 123, mean what the government has not published. What the government has not published in the gazette or otherwise is unpublished. That's what it means...the non-obstante clause in section 22 (of the RTI) overrides not just the (OSA) but all other laws for the time being in force. So 123 gets over with! 123 can't be used!"

"For the purpose of deciding whether a claim is justified, Your Lordships can look into it. But the documents lead to a third party violating a solemn undertaking given to the government of France...", asserted the AG.

"Is that what you have said in your affidavit?", questioned the judge.

"No, I have claimed privilege. Or Other countries will say that 'you sold the aircraft to India at this price so why are we being asked for a higher price'", responded Mr. Venugopal.

Finally, former Cabinet Minister and petitioner-in-person Arun Shourie sought to thank the AG for corroborating the genuineness of the documents in controversy by saying that they are photocopies. He reiterated that the publications by the Caravan and The Wire had started on November 18 last year in which all these notes were reproduced- "detailed questionnaires were sent to the government and they had replied!