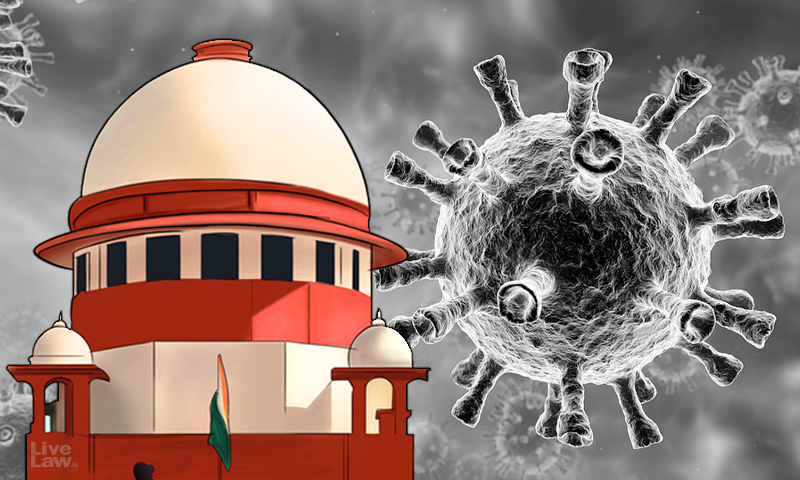 Despite the Guidelines and SOPs issued, for lack of implementation the Pandemic has spread like wild fire, the Supreme Court observed on Friday.The bench comprising Justice Ashok Bhushan, R. Subhash Reddy and MR Shah observed that the safety and health of the citizens must be the first priority, rather than any other considerations. The court said that strict and stern action should be...

Despite the Guidelines and SOPs issued, for lack of implementation the Pandemic has spread like wild fire, the Supreme Court observed on Friday.

The bench comprising Justice Ashok Bhushan, R. Subhash Reddy and MR Shah observed that the safety and health of the citizens must be the first priority, rather than any other considerations. The court said that strict and stern action should be taken against those who are violating the Guidelines and SOPs, 'whoever he may be and whatever position the violator is occupying'.

i) More and more police personnel shall be deployed at the places where there is likelihood of gathering by the people, such as, Food Courts, Eateries, Vegetable Markets (Wholesale or Retail), sabzi Mandies, bus stations, railway stations, street vendors, etc.
ii) As far as possible, unless must, no permission shall be granted by the local administration or the Collector/DSP for celebration/gathering even during the day hours and wherever the permissions are granted, the local administration/DSP/Collector/Police In-charge of the local police station shall ensure the strict  compliance of the Guidelines/SOPs. There should be a mechanism to check the number of people attending such function/gathering, such as, the particulars with respect to how many persons are going to attend the celebration/gathering, timings during which the celebration/gathering is to take place etc.
iii) There shall be more and more testing and to declare the correct facts and figures. One must be transparent in number of testing and declaring the facts and figures of the persons who are Corona Positive. Otherwise, the people will be misled and they will be under impression that everything is all right and they will become negligent.
iv) Whenever directions are issued under the Disaster Management Act directing the corporate hospitals/private hospitals to keep 50% or any other percentage free municipal beds, it must be strictly complied with and there shall be constant vigilance and supervision.
v) There shall be free helpline numbers to redress the grievances of common man, when there is noncompliance of the directions by the private hospitals/corporate hospitals.

vi) Curfew on weekends/night be considered by States where it is not in place.

vii) In a micro containment zone or in an area where number of cases are on higher side, to cut the chain, they should be sealed and there should be complete lockdown so far as such areas are concerned. Such containment areas need to be sealed for few days except essential services. The same is required to break the chain of virus spread.
viii) Any decision to impose curfew and/or lockdown must be announced long in advance so that the people may know and make provisions for their livelihood, like ration etc.
ix) Another issue is a fatigue of front row health care officers, such as, Doctors, Nurses as well as workers. They are already exhausted physically and mentally due to tireless work for eight months. Some mechanism may be required to give them intermittent rest.

Regarding the issue about political gatherings, the bench referred to the guidelines issued by the Election Commission of India, and directed all the States / Union Territories to issue necessary directions to ensure compliance. Guidelines although were issued by General Election/Bye Election, that can be implemented by different States with suitable modifications with reference to Elections of other organizations to ensure safety of people in general from Covid-19, the court said.

Following are some of the observations made in the order

People should understand their duty and follow rules very strictly

Every State must act vigilantly and to work with the Centre harmoniously. It is the time to rise to the occasion. Safety and health of the citizens must be the first priority, rather than any other considerations. People should understand their duty and follow rules very strictly. It is the duty of every citizen to perform their fundamental duties as guaranteed under the 5 Constitution of India. By not following the Guidelines/SOPs issued by the State from time to time, such as, not wearing the masks, not keeping social distances, to participate in the gatherings and the celebrations without maintaining social distances, they are ultimately not damaging themselves but they cause damage to the others also. They cannot be permitted to play with the lives of the others and they cannot be permitted to infringe the rights of other citizens, like right to health guaranteed under Article 21 of the Constitution of India.

There is a need to help and guide our people to implement the guidelines and the SOPs issued by the Government, either the Union or the State, such as, wearing of masks, keeping the social distance etc. In many States, despite the huge fine recovered, such as, Rs. 80 to 90 crores in the State of Gujarat alone, people are not following the guidelines and the SOPs. There must be a strict implementation by the authorities so as to ensure that the SOPs and the guidelines issued from time to time are strictly adhered to and followed by the people. Additional Chief Secretary (Home)/Secretary (Home) of respective States shall ensure the strict 6 implementation of the SOPs and the guidelines with the help of the concerned Superintendent of Police/District Superintendent of Police and the Police In-charge of the concerned police station.