No COVID-19 Posters Outside Patients Homes Without Direction From Competent Authority Under DMA : Supreme Court 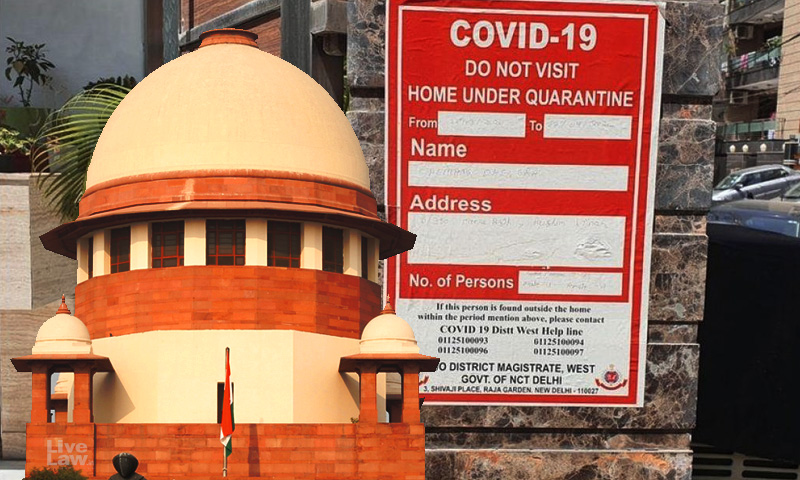 The Supreme Court on Wednesday held that affixing of COVID-19 posters outside the homes of patients can be done only if there is a direction from the competent authority under the National Disaster Management Act.The order was passed in the case Kush Kalra v Union of India.The Court noted that the Centra has already clarified this stand on the issue and directed the States and Union...

The Supreme Court on Wednesday held that affixing of COVID-19 posters outside the homes of patients can be done only if there is a direction from the competent authority under the National Disaster Management Act.

The order was passed in the case Kush Kalra v Union of India.

The Court noted that the Centra has already clarified this stand on the issue and directed the States and Union Territories to follow the sasme.

A bench of Justices Ashok Bhushan, BR Gavai & MR Shah disposed off the writ petition which had challenged the decision of various states Governments to affix posters outside the homes of COVID19 patients who are in isolation, after it reserved orders in the plea on December 3.

On the last date, bench had asked Solicitor General Tushar Mehta appearing for the Centre whether an advisory can be issued in this regard by the Centre so that a State is dissuaded by pasting posters on walls of covid positive patients homes. The law officer told court that such an advisory was already in place.

"Names of people being written on posters and RWA has whatsapp texts going around with names of such people who are covid positive. There should be a positive direction from Govt. & Court which will end this practice," said Advocate Chinoy Sharma.

Taking note of the above submission, Court said that it shall reserve the judgment on the above plea.

On December 1, top court had observed that the practice of conspicuously affixing posters outside the residence of COVID19 positive patients creates stigma and often leads to a situation where patients may be treated as so called "untouchables".

Solicitor General Tushar Mehta submitted before the Court that Centre has filed its affidavit in the case on November 30 averring that such posters are meant to ensure that nobody inadvertently enters the house of a Covid positive patient.

"If a poster humiliates or stigmatises a person then it should be avoided. But if it warns a person from inadvertent entry then it is upto the State government," Mehta said.

"The hard reality is that many such patients are treated like untouchable," Justice MR Shah also remarked.

The PIL has challenged the affixing of posters outside the homes of COVID-19 patients as a mark of identification, as well as divulging names of such patients to housing societies' management and Resident Welfare Associations, saying such disclosure of the identity of patients is in gross violation of their fundamental right to privacy.

The plea has further sought directions to ensure such disclosure of names does not take place and has prayed for quashing of the executive orders of the States and Union Territories that allow affixing of posters outside homes of the COVID-19 patients.

It is stated that Constitution does not and can never permit discrimination on the ground of illness and physical suffering, adding that circulation of names of such persons publicly and subjecting them to the scrutiny of the public goes against the ethos of living with dignity.

"Affixing posters outside their homes lead to their illness is being widely publicised amongst other residents of a colony or apartment complex as well as household staff of neighbours, vendors, passers-by and other unrelated persons," the plea has averred.