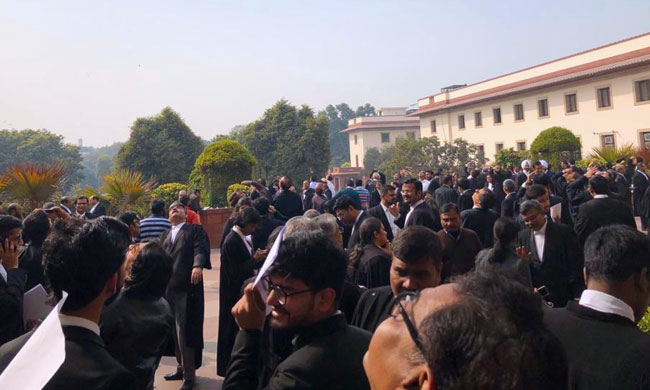 In the same way as other industries and professions remain severely affected by prevailing circumstances, consequent to the outbreak of the COVID-19 pandemic, members of the legal fraternity are also facing tumultuous times. Keeping with norms of social distancing, Courts have been functioning online, or virtually, and only cases that are deemed to be urgent are being listed and taken...

In the same way as other industries and professions remain severely affected by prevailing circumstances, consequent to the outbreak of the COVID-19 pandemic, members of the legal fraternity are also facing tumultuous times.

Keeping with norms of social distancing, Courts have been functioning online, or virtually, and only cases that are deemed to be urgent are being listed and taken up for hearing. Courts not functioning in their normal capacity, resulting in far fewer cases, has significantly reduced the amount of work available in the industry and left a number of lawyers without any work at all.

Since this system was devised during the nationwide lockdown, the legal fraternity widely expected a gradual phasing out of the restrictions and, consequently, resumption of physical/open court hearings. After lockdown norms were relaxed, or after "Unlock 1.0" came into being, post May 10, a number of representations have been made by Lawyer bodies emphasizing on the need to open up the Courts. However, much to the dismay and distress of advocates, Courts have expressed their reservations in acceding to this and, as of now, restoration of normal Court functioning seems unlikely in the immediate future.

Given the circumstances, a number of advocates have chosen to take up non-legal work, or jobs outside the legal profession, in an attempt to sustain themselves and alleviate themselves from a murky financial situation. Several lawyers who had left their homes and shifted to practice in different cities have been forced to go back to their native places due to financial constraints. Many of them have chosen to take up other part times jobs, while some have decided to not only left the city they practiced in, but also their practice in its entirety. This trend appears to be most common amongst younger advocates who had an independent practice, with around 2-3 years' experience.

Few days ago, the news about a Tamil Nadu lawyer taking to weaving baskets to make his ends meet had gained wide attention. Moved by the news, Chief Justice of Chattisgarh High Court, P R Ramachandra Menon, penned a letter to him with words of inspiration, accompanied with a 'gift' of Rs 10,000.

"This is not a donation or a contribution out of any sympathy, but a 'gift' you deserve in recognition and appreciation of your concept/commitment to the 'dignity of labour'", Justice Menon said in the letter.

A lawyer in Odisha also resorted to selling vegetables right outside the High Court as a form of protest against delay on part of the Bar Council in releasing financial assistance as promised. There was also a report about a lawyer of Karnataka High Court selling street food at his native town to sustain himself.

However, these are not one-of-a-kind cases as LiveLaw found out after interacting with several advocates who are distraught with the situation. Financial distress has led advocates to not only go back home in order to avoid rental and living expenses that come with living in another city, but a number of lawyers have joined their family businesses or are doing odd jobs to ensure some cash flow. From selling COVID essentials to looking into the family busines to real estate brokerage, lawyers have been pushed away from the legal fraternity, not temporarily in some cases, to be able to keep their heads above water.

Subodh Mohanty, whose practice in family law and matrimonial disputes took a severe hit since the lockdown was announced in March was forced to go back home in early June because he was left with no means to sustain himself.

"Yes, I do have a couple of cases with me, but they aren't being taken up because there's apparently no urgency in those matters. I get that. However, the clients have already paid money and constantly ask about the status of their case. There's only so much that can be explained to them. Most importantly, there are zero fresh cases. I have no income whatsoever, and staying in Delhi does not come cheap. Which is why I spoke to my family and came back to Bhubaneswar", he said.

Mohanty has decided to use his time trying to set up a business in fish farming. Though he isn't sure about the permanency of this move, he says "I have been urging my father to do this for a couple of years now. He has owned this bit of land which has been lying unused for years. It has a natural pond in it. So we've just started buying fishlings and seeds from the nursery and are breeding them in this pond. Engaging in pisciculture has been something the family has been interested in, and now that I have time and no money, I am thinking I might try and set up an ecosystem here with vegetables and all and see how it goes."

Another Advocate, Sudhir Jain, who has been practicing criminal law for around 4 years, in lower courts primarily, also returned to his native home in Madhya Pradesh where he is helping out with his family business in real estate brokerage. "Not that this market is booming, but I could not keep up in Delhi anymore. I urged my clerk to also go home, since I could not pay his salary after the month of April. There has been no assistance, and with the Courts not reopening properly, there's too much uncertainty."

On being asked about what work he is doing at home, Jain laughed and said "I've shown a couple of flats to people. We have barely had any clients since lockdown, obviously. But now with some professionals coming back to their own cities, my father thinks there might be better days ahead. At least I did two days of work here, got nothing in the last 3 months in Delhi (kuch tuh kiya yahan, Dilli mein toh utna bhi nahi mile inn mahino mein)."

Advocate Tavish Singh, who also has a practice in criminal law, said he saw an opportunity to earn an extra income when legal work came crashing down, and tried his hand at dealing in COVID essentials such as masks and PPE kits. "It seemed appropriate at the time, because there were new matters and everyone was jumping on the bandwagon (of selling masks etc.). So I also tried to cut a few deals, but I didn't have the resources then. It has been over two months now though, and I'm helping someone I knew, who has a business in such medical supplies. It is all certified stuff, so no issues there."

With regard to what he does in this shop, he says, "I have been doing sales for him, which sometimes includes directly approaching pharmacies and chemists."

In addition, various instances of lawyers engaging in non-legal was has emerged from across the country.

According to a recent survey by New Delhi-based legal think tank Vidhi Centre for Legal Policy, as many as 80% of the surveyed advocates from the Delhi High Court believed that lawyers in their first two years of practice earn between Rs. 5000 and Rs. 20000 per month.

40% of the surveyed advocates at the High Courts of Allahabad, Bombay, Kerala, Madras and Patna were of the opinion that young lawyers earned between Rs. 2000 and Rs. 5000 per month, during their first two years of practice.

Rules 47 to 52 of the Bar Council of India Rules place a restriction on advocates from taking up any other form of employment. Section 35 of the Advocates Act, 1961 also prohibits a lawyer from possessing the licence to practice if they engage themselves in any non-legal job or profession.

Rule 52 permits a lawyer to take up part-time employment with the consent of its parent state Bar Council. The nature of work, however, must not be in conflict with their professional work and it should not be against the dignity of a legal professional to engage in the same.

Understanding the immense distress that several lawyers find themselves in, a number of State Bar Councils have taken steps to come to the aid of these lawyers.

On July 10, the Bar Council of Delhi wrote to the Prime Minister urging the allocation of Rs. 500 crore from the Contingency Fund of India and PM Cares Fund towards the hardships being faced by lawyers. BCD Chairman, KC Mittal also claims to have disbursed financial assistance to the tune of Rs. 8 crore amongst 1600 struggling lawyers in Delhi. Other Bar Councils including Assam, Karnataka, Arunachal Pradesh, Tamil Nadu & Puducherry and others have also set up distress funds.

Bar Council of Maharashtra and Goa also decided to not charge any readmission fee (which is around Rs. 25,000) from members who wish to surrender their licence to practice in order to take up some other employment and resume their practice after restoration of normalcy.

It has been learnt through sources that various State Bar Councils are in talks to approach the Supreme Court seeking financial assistance and an allocation of funds from the central Contingency Fund.

In the meantime, struggling and dismayed lawyers will seemingly have to resort to various permissible channels through which they can generate an income.

(Names of the interviewed advocates have been changed, having regard to their privacy)