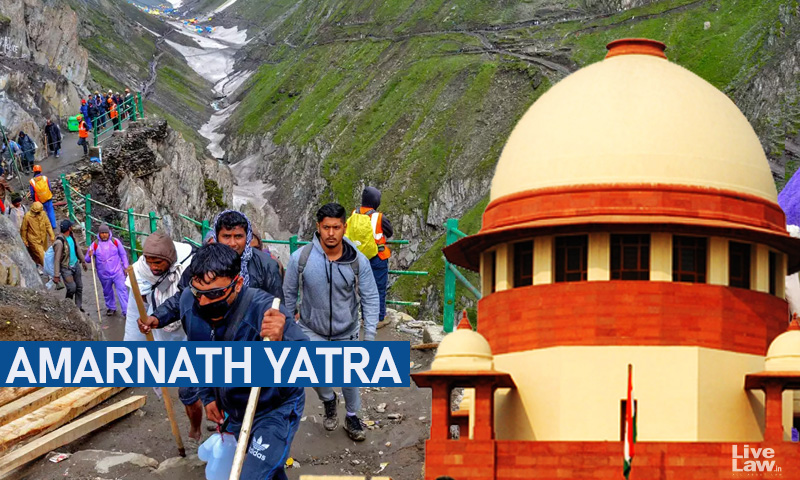 Expressing regard for the principle of "separation of powers", the Supreme Court on Monday refused to entertain a plea seeking to stop the Amarnath Yatra this year citing the risk of COVID-19.A bench comprising Justices D Y Chandrachud, Indu Malhotra and K M Joseph said that local administration was better equipped to take a decision on the matter. Accordingly, the bench left the matter to...

Expressing regard for the principle of "separation of powers", the Supreme Court on Monday refused to entertain a plea seeking to stop the Amarnath Yatra this year citing the risk of COVID-19.

"Matter must be left to competence of Local Administration, keeping in mind the Statutory Provisions", the bench ordered.

"We are of view that recourse being taken here under Article 32(of the Constitution) is inappropriate. The issue as to whether Yatra be held should be left with the local administration. Undoubtedly any decision arrived at must be based on law and all relevant statutory provisions", the bench noted in the order.

The bench pointed that the SC had to modify its earlier order banning Jagannath Rath Yatra to allow Rath Yatra at Puri, based on the proposals of Puri administration.

This means that the local administration is better equipped to deal with the exigency of the situation, the Court said.

While dismissing the plea, the Court granted liberty to the petitioner to move representations before the concerned authorities and held that the authorities may take appropriate decision in the matter having regard to the ground situation.

On July 5, the Jammu and Kashmir administration had allowed Amarnath Yatra to be held in a restricted fashion with 500 pilgrims per day by road from Jammu to the 3,880-metre-high cave shrine.

As per reports, Shri Amarnathji Shrine Board (SASB) is planning to undertake the yatra in the last week of July for a short duration of 15 day.

Senior Advocate Devadatt Kamat, appearing for the petitioner, submitted that it would not be possible to carry out the norms of physical distancing, wearing of masks and other steps to prevent COVID-19 transmission at high altitudes.

He highlighted that India has now about 9 lakh COVID-19 cases, and stressed that conduct of Yatra in such a situation would be detrimental to public health.

Justice D Y Chandrachud orally asked if the Court can take over the administrative functions under Article 32 of the Constitution.

"Ultimately whether the Yatra should be held or not, these are matters which the Executive Administration has to consider", the judge remarked.

The petitioner then pointed out that the SC had intervened to stop Lord Jagannath Rath Yatra citing public health concerns. In response, Justice Chandrachud said that the SC later modified the order to allow Rath Yatra at Puri.

"We are ill-equipped to determine whether a Yatra should be held in a particular terrain or not. There are matters to the District Administration to decide", Justice Chandrachud reiterated.

Senior Advocate Kamat then submitted that the petitioner had made four representations to the concerned authorities, which have not evoked any response so far. Therefore, the counsel said, the petitioner approached the SC as a last resort.

"Right to religion must yield to public health. If state is permitting large congregations,it will be in contravention of own principles. If virus spreads, who will suffer? Your Lordships are not Powerless to take action. I pray that My Lords call upon the Administration. Or else, it will put the entire public at risk", Kamat submitted

Kamat clarified that the petitioner was not against the conduct of rituals pertaining to Yatra, but was only seeking to restrict participation of people from all over the country. The petitioner also sought for allowing live-telecast of the rituals.

"We are not against the yatra, we want rituals to continue..it's just about whether people from all over the country can be allowed to come", he said.

He pointed out that freedom of religion under Article 25 was subject to public health.

SABLO stated that the cancellation of the Yatra in so far as participation of devotees/pilgrims is concerned, is imperative in light of the prevailing situation in the country and in view of the threat to public health. The organisation has also stated that the prevailing disaster situation in the country, as defined under the NDMA, 2005 makes it pertinent to restrict this year's yatra for public and for the enforcement of Articles 14 & 21 of the constitution.

The plea stated that the dates of the Yatra have not been announced yet and despite that, permissions to few Bhandara Organisations to reach the venue before June 28 and to start the service (seva) from July 3 have been released which may cause serious consequences for the public health at large.