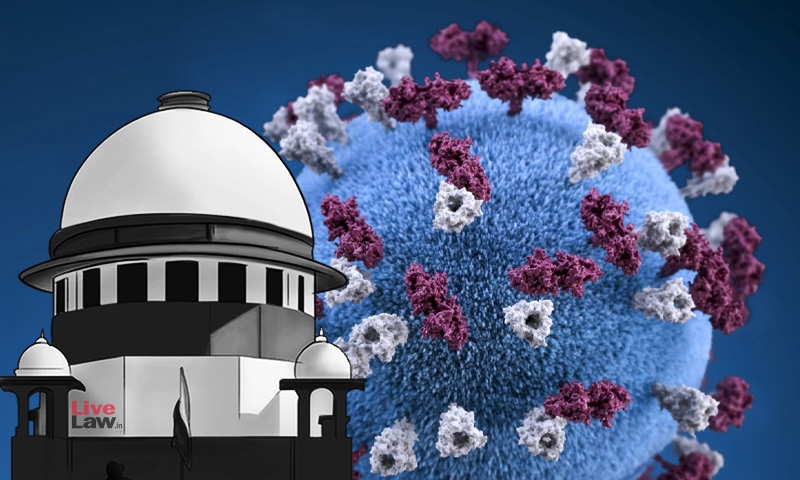 The Supreme Court on Monday expressed concerns at the low number of claims received by State Governments for ex-gratia compensation for COVID deaths, and commented that it could be because of no wide publicity being given for the compensation scheme.A bench comprising Justice MR Shah and BV Nagarathna directed all States to furnish to the Union Government the particulars related to...

The Supreme Court on Monday expressed concerns at the low number of claims received by State Governments for ex-gratia compensation for COVID deaths, and commented that it could be because of no wide publicity being given for the compensation scheme.

A bench comprising Justice MR Shah and BV Nagarathna  directed all States to furnish to the Union Government the particulars related to the claims and disbursal of COVID compensation. States should give specific information regarding 8 queries(detailed below). The Court also suggested that a uniform process could be adopted pan-India for registration of claims and disbursal of compensation.

The bench had posted the matter today to consider the case of State of Gujarat, which was earlier asked to revise the notification issued by it to constitute a Scrutiny Committee for processing compensation claims. The bench had observed that the constitution of the scrutiny committee was not in consonance with the directions passed  in the case Gaurav Kumar Bansal versus Union of India.

Today, Solicitor General, Mr. Tushar Mehta, appearing on behalf of the Government of Gujarat submitted that pursuant to the concerns expressed by the Court on the last date of hearing, a fresh affidavit has been filed by him along with a memorandum which simplifies the whole compensation disbursal mechanism and supersedes the last two memorandums prepared by the State Government.

The Bench observed that the present affidavit was in consonance with the earlier order of the Court, but expressed concern with respect to the implementation mechanism.

"Turn to pg. 7 para 6. Now this … can be said to be in consonance with our directions. Please see, the only difficulty is with respect to the implementation."

Reading the relevant portion, Mr. Mehta informed the Bench that -

"Application is to be made to the District Collector, Mamlatdar of the Taluka for COVID 19 related death related assistance and Disaster Management Authority. District administration will release funds directly to the beneficiary in accordance with the above guidelines."

Considering that the knowledge of the location of the Disaster Management office might not be with the people seeking compensation, the Bench indicated that the procedure suggested by the State might be difficult to follow.

Mr. Mehta informed the Court that an online portal is being set up to facilitate the disbursal process and it would be given publicity so people are made aware of the same.

"We will have an online portal in two weeks. So far as item no 6 is concerned, if I am a victim I can go to collector or mamlatdar. Second part is for internal use, that is from where the fund will come. This fund will go from the Disaster Management Authority"

The difficulty, the Bench felt, was only with respect to going and physically applying for the compensation.

"A person in a remote village, he has to go to a district place, collector place, find out. And you know an intermediary person will also be there. He will take advantage."

Mr. Mehta assured, "A portal will be designed and published...for only this purpose."

The Bench noted that it would keep the matter on next Monday and in the meanwhile the portal as proposed by Mr. Mehta can be developed.

Next, the Bench enquired, "One another thing - What about other states?"

Mr. Mehta apprised the Court, "I do not have the system, which I have shown for Gujarat, in place for other states...They can adopt this system, what notification Milords read as a standard system."

The Bench further enquired if the orders of the court are being followed by other states.

Mr. Mehta informed the Bench, "There is a Separate affidavit filed. There is a chart annexed...pg. 5. This is our chart...The important thing is missing and we had called for, is the system that is in place in those states."

The Bench remarked, "We are going to pass an order that this will be the model resolution to be adopted by India."

"In Kerala they have developed a portal.", the Bench pointed out.

It was informed by Mr. Mehta, "But, we don't know that model...If the Hon'ble Court considers the Gujarat model can be replicated in all states."

Justice Nagarathna asked the Solicitor General to look at the procedure for disbursal for minors.

Mr. Mehta informed the Bench that a separate PIL in this regard has already been filed and is before the Court for consideration.

Aware of the PIL referred to by Mr. Mehta, Justice Shah stated, "You are right. We'll not interfere with that."

The Bench was perturbed that like Gujarat, Andhra Pradesh has also constituted a scrutiny committee. In Gujarat though 10092 deaths have been recorded only 1250 claim forms have been received till date. Therefore, the Court inferred that there is a lack in publicising the compensation process.

Mr. Mehta responded, "In Gujarat, 10,000 deaths have already been reported in the portal. We have started making payment in direct benefit transfer mode."

The Bench decided,"We'll issue notice to a few States, Maharashtra, Haryana, Kerala and 3-4 States and ask them to file a detailed affidavit.."

Another aspect pointed out by the Court was that in some states like Andhra Pradesh the claim exceeded the number of deaths recorded. Considering the same, the Court noted that the data pertaining to death provided to the Court might not be correct.

The Bench observed that -

"Pursuant to our order, State of Gujarat has filed an additional affidavit along with a fresh resolution with respect to providing financial assistance to family members of the successors of the persons who died due to COVID 19 in State dated 28.11.2021 has been placed on record...On going though the fresh resolution dated 28.11.2021, prima facie we are satisfied that....the resolution can be said to be absolutely as per our earlier order...The procedure now seems to be simplified and in consonance with our order...form to be filed by applicant is simplified...making claims the same shall be online, for which an exclusive portal to be created by State Govt. The aforesaid shall facilitate the applicant to make an application for compensation...It will make the procedure further easier and avoid long queues at the Collectors/Mamlatdar's office. Ld. SG...has stated that necessary further steps have been done by State of Gujarat..and will come with a portal so that applications for compensation along with documents can be filed online."

"Having gone through a fresh resolution dated 28.11.2021 of State of Gujarat barring the aforesaid aspect we are satisfied..and the same can be made applicable pan India...procedure for compensation can be followed pan India uniformly...On going through the data collected by UOI...it appears that in many states the number of claims received is on a much lower side. Some of the states have not furnished any particulars. For eg. States of Andhra Pradesh, Bihar, Assam, UT of Chandigarh, J&K, Jharkhand, UT of Ladakh, Maharashtra, State of Sikkim, Tamil Nadu, Telangana, Tripura have not provided info. to the Union Govt., though specifically asked by UOI pursuant to our order. From data it also can be seen that the forms/application received for compensation is on a very lower side. Thus from aforesaid it can be presumed that either there is no wide publicity given by concerned State w.r.t. compensation offered or there is no wide publicity given by the concerned state or the concerned claimant are not made aware where to apply. It is also required to be noted that so far as State of Andhra Pradesh is concerned 14431 deaths recorded and 23868 claims made, which is double than the deaths recorded. That might be because of our order that the claimant can file for compensation if the RTPCR report was positive and he died within a period of 30 days irrespective of the cause mentioned in the death certificate. Number of claimants is likely to increase in other states also."

"In view of the above we direct the Chief Secretary of the States to furnish full particulars to the UOI, Ministry of Home Affairs, Disaster Management Authority on:

To be made available to the Home Affairs...Put up on 6.12.2021. Issue notice to Chief Secretary to aforesaid states to submit aforesaid particulars on the aforesaid aspects. Returnable on 6.12.2021...In the meantime Gujarat may make an online portal to invite applications for Covid related deaths."