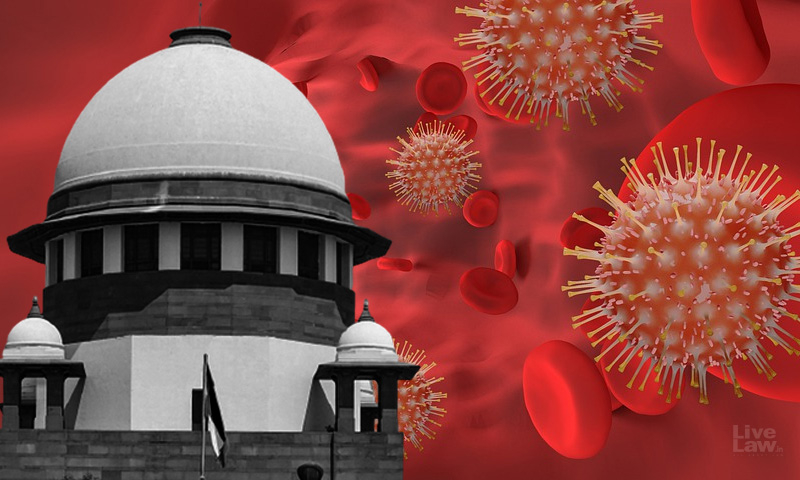 x
The Court however said that it cannot direct Government to pay a particular amount as compensation.

The National Disaster Management Authority has a statutory obligation to frame guidelines for recommending minimum ex-gratia assistance for the victims of COVID pandemic, held the Supreme Court on Tuesday.

The Court rejected the argument of the Union Government that Section 12 was not a mandatory provision. The Court noted that Section 12 uses the word 'shall' and hence concluded that the provision was mandatory. The Union had argued for reading 'shall' in Section 12 as 'may' .

However, the Court said that it cannot direct the Union Government to pay a particular amount as compensation. The Court has directed the National Authority to frame guidelines within 6 weeks on providing ex-gratia assistance to COVID victims.

The petitioners, in their writ petitions filed before the Supreme Court, had sought directions to the Centre & States to provide ex-gratia compensation of Rs. 4 lakh to the family members of those who have succumbed to the COVID-19 disease and post COVID19 complications. The petitioners also sought a relief regarding simplification of process for issuance of death certificates of persons who lost lives due to COVID.

In its judgment, the Court held that the National Disaster Management Authority failed to discharge its functions by not recommending ex-gratia assistance.

"There is a  duty cast on the national authority to prescribe minimum standards of relief....There is nothing on record that National Authority has issued any guidelines for minimum standards of relief for Covid victims, which shall include ex-gratia assistance for COVID...The national authority has failed to perform its statutory duty under Section 12 by failing to recommend minimum relief for ex-gratia assistance", the Court said.

Can't direct Government to pay a particular amount as compensation; Govt has its priorities

Further, after discussing the scope of the power of judicial review, the Court held that it cannot direct the Government to pay a particular amount as compensation. The Government has its own priorities and has to cater to various needs and sectors, such as public healthcare, welfare of migrants and marginalized affected by pandemic. The Government also has to deal with the effect of the pandemic on the economy.

It cannot be disputed that ex-gratia assistance will create financial strain on the government, the Court said. Therefore, it left the matter to the wisdom of the National Authority.

The Court disposed of the writ petitions with the following directions :

Direct NDMA to come up with guidelines for ex-gratia for the family members of persons who died due to COVID 19 as mandated under Section 12(iii) of DMA.  What amount is to be given as ex gratia assistance is left to the wisdom of the national authority. They may consider fixing the amount taking into consideration the observations made by the court. They may also consider requirement, availability of the fund under NDRF, SDRF, and the priorities determined by the national authority, Union, the fund carried out for minimum standards of relief etc. The aforesaid directions should be accommodated within a period of 6 weeks from today.

The Court also directed that simplified guidelines be framed for issuance of death certificates/ official documents stating the exact cause of death - that is death due to COVID 19.

The Central Government had opposed the plea for Rs 4 lakh compensation for COVID victims citing financial constraints of the Centre and State Governments.

"It is an unfortunate but important fact that the resources of the Governments have limits and any additional burden through ex-gratia will reduce the funds available for other health and welfare schemes." Centre had said in its affidavit filed before the Supreme Court.

While acknowledging that the affected families need help and support, Ministry of Home Affairs stated that it is wrong to state that the help can be provided only through ex-gratia assistance as that would be a 'rather pedantic and narrow approach'.

According to MHA, health interventions, social protection, and economic recovery for the affected communities, would be a more prudent, responsible, and sustainable approach.

Further, MHA has stated that there is no precedent of giving ex- gratia for an ongoing disease or for any disaster event of long duration, extending for several months or years, and granting ex-gratia for one disease, while denying the same for those accounting for larger share of mortality, would not be fair and would create unfairness and invidious discrimination.

Senior Advocate SB Upadhyay, appearing for the petitioners, had argued that Section 12 of the Disaster Management Act created an obligation on the Centre to notify relief for the victims of COVID pandemic, which has been declared as a national disaster. Financial constraints cannot be cited as a ground to not perform a statutory obligation, the counsel argued.