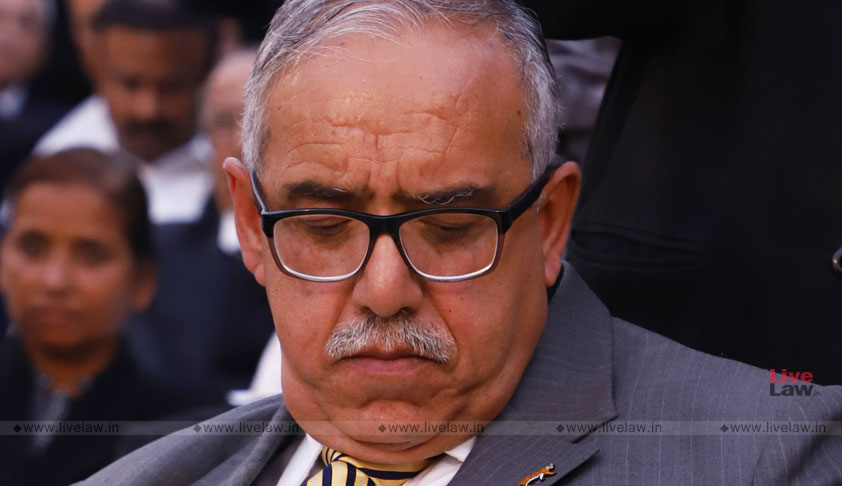 Justice Deepak Gupta, judge of Supreme Court, spoke at length about the chilling effect caused by sedition law on legitimate criticism on the organs of state. He also mentioned about the threat of contempt action stifling fair criticism of judiciary."The judiciary is not above criticism. If Judges of the superior courts were to take note of all the contemptuous communications received by...

Justice Deepak Gupta, judge of Supreme Court, spoke at length about the chilling effect caused by sedition law on legitimate criticism on the organs of state. He also mentioned about the threat of contempt action stifling fair criticism of judiciary.

"The judiciary is not above criticism. If Judges of the superior courts were to take note of all the contemptuous communications received by them, there would be no work other than the contempt proceedings. In fact, I welcome criticism of the judiciary because only if there is criticism, will there be improvement. Not only should there be criticism but there must be introspection. When we introspect, we will find that many decisions taken by us need to be corrected.

Criticism of the executive, the judiciary, the bureaucracy or the Armed Forces cannot be termed sedition. In case we attempt to stifle criticism of the institutions whether it be the legislature, the executive or the judiciary or other bodies of the State, we shall become a police State instead of a democracy and this the founding fathers never expected this country to be".

He was speaking at the a workshop organised by Praleen Public Charitable Trust at Ahmedabad, Justice Deepak Gupta of the Supreme Court spoke at length on the topic "Law of Sedition in India and Freedom of Expression".

"In Chhattisgarh, a 53 years old man was arrested on charges of sedition for allegedly spreading rumours over social media about power cuts in the State. It was said that this was done to tarnish the image of the then Government running the State. The charge was absurd and again highlights the misuse of power. In Manipur, a journalist made a vituperative attack on the Chief Minister of the State and used totally unparliamentary language against the Prime Minister of the country. The language was intemperate and uncalled for but this was not a case of sedition. It was at best a case of criminal defamation. The man was kept behind bars for months under the National Security Act.
In West Bengal, a party leader was arrested for morphing an image of the Chief Minister and in U.P., a man was arrested for morphing the image of the Prime Minister of the country and shockingly this image had been morphed 5 years back. What was the hurry to suddenly arrest this man after 5 years? A rapper who does not even live in India has been charged for sedition. The language used by her may be totally uncalled for, some other offences may be made out, but sedition does not appear to be one of them. In another extreme case, a film maker in Tamil Nadu has been booked under Sections 153 and 153A IPC for inciting caste enmity because he allegedly made remarks against the Chola Dynasty King for being caste oppressive. This Chola Dynasty King lived more than a thousand years back."

The judge emphasized that allowing a climate for free expression of thoughts and ideas without fear of criminal prosecution is essential for growth of civilization :

"If everybody follows the well-trodden path, no new paths will be created, no new explorations will be done and no new vistas will be found. We are not dealing with vistas and  explorations in the material field, but we are dealing with higher issues. If a person does not ask questions and does not raise issues questioning age old systems, no new systems would develop and the horizons of the mind will not expand. Whether it be Buddha, Mahavira, Jesus Christ, Prophet Mohammad, Guru Nanak Dev, Martin Luther, Kabir, Raja Ram Mohan Roy, Swami Dayanand Saraswati, Karl Marx or Mahatma Gandhi, new thoughts and religious practices would not have been established, if they had quietly submitted to the views of their forefathers and  had not questioned the existing religious practices, beliefs and rituals."

The world would be a much better place to live, if people could express their opinions fearlessly without being scared of prosecutions or trolling on social media. It is indeed sad that one of our celebrities had to withdraw from social media because he and his family members were trolled or threatened of dire consequences.

"Sedition Law Most Abused Today, Criticism Against Govt. In Power Does Not Make Any One Less Patriotic": Justice Deepak Gupta

Criticism of the government will not attract sedition, unless accompanied by incitement to violence, the judge said.

"Criticism of the Government by itself cannot amount to sedition. In a country which is governed by the rule of law and which guarantees freedom of speech, expression and belief to its citizens, the misuse of the law of sedition and other similar laws is against the very spirit of freedom for which the freedom fighters fought and gave up their lives".

He also spoke about the risk of majoritarianism trumping rule of law :

"Majoritarianism cannot be the law. Even the minority has the right to express its views. We must also remember that in India we follow the first past the post principle. Besides, he also stated that even Governments which come in with a huge majority do not get 50% of the votes. Therefore, though they are entitled to govern or be called as majority, it cannot be said that they represent the voice of all the people."

Justice Gupta started his speech by paying tributes to Justice P D Desai, who was Chief Justice of Calcutta and Bombay High Court. He recalled that Justice Gupta was a fearless judge who worked tirelessly.