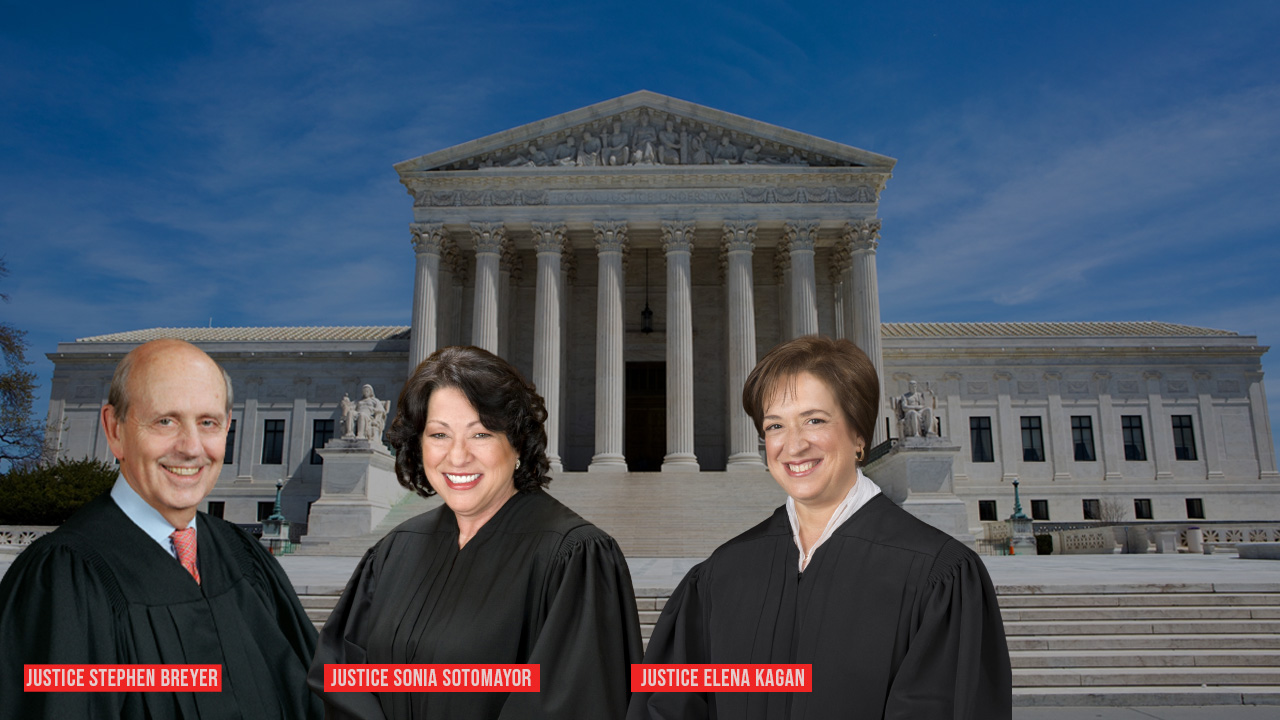 The Supreme Court of United States on Friday overturned Roe v. Wade wiping out the constitutional right to abortion that had been in place for nearly 50 years. The Court in a 6-3 ruling powered by its conservative majority upheld a Republican-backed Mississippi law that bans abortion after 15 weeks.

The controversial ruling which had been expected since May after new portal Politico published a leak of the opinion, will have intensely personal ramifications throughout the country as several States in the United States move to restrict or completely outlaw abortion.

Whereas, Justices Stephen Breyer, Sonia Sotomayor and Elena Kagan in a scathing dissent slammed the "draconian" opinion as a decision that will undeniably curtail women's rights and turn back "their status as free and equal citizens."

"Whatever the exact stop of the coming laws, one result of today's decision is certain- the curtailment of women's rights, and of their status as free and equal citizens", the dissenting opinion written by Justice Sotomayor stated.

It averred further, "Taking away the right to abortion, as the majority does, destroys all those individual plans and expectations. In so doing, it diminishes women's opportunities to participate fully and equally in the Nation's political, social and economic life".

The liberal judges also accused the Court of discarding the "balance" the Court struck for half a century as it found a middle ground between "respecting a woman as an autonomous being" and protecting the life of a fetus.

Highlighting the majority's disregard for the precedent established in Roe and reaffirmed in Planned Parenthood v. Casey, the justices argued that the legal framework established by these two cases "proved workable in courts across the country," and that there was no requirement for interference with the precedents.

Negating the possibility that this ruling could be a product of political maneuvering and decades of ideological strategy, the dissenters state bluntly that Roe has been overruled only because the composition of this Court has changed.

"Casey is a precedent about precedent. It reviewed the same arguments made here in support of overruling Roe, and it found that doing so was not warranted. The Court reverses course today for one reason and one reason only: because the composition of this Court has changed," the dissent stated.

Opining further that the majority has refused to consider the life-altering consequences of reversing Roe and Casey, the dissent underscores,

"After today, young women will come of age with fewer rights than their mothers and grandmothers had. The majority accomplishes that result without so much as considering how women have relied on the right to choose or what it means to take that right away. The majority's refusal even to consider the life-altering consequences of reversing Roe and Casey is a stunning indictment of its decision."

Pertinently, the justices also echoed the concerns of many human rights activists that the ruling would have a severe impact on all rights that seek to protect autonomous decision-making over the most personal of life decisions. They warned that the majority's reasoning threatens other rights that, until recently, appeared settled, including same-sex marriage and intimacy, and the right to purchase contraception.

In order to allay fears, the justices in the majority averred that their ruling does not cast "doubt on precedents that do not concern abortion". However, rejecting such assurances, the dissent emphasised,

"No one should be confident that this majority is done with its work. The right Roe and Casey recognized does not stand alone. To the contrary, the Court has linked it for decades to other settled freedoms involving bodily integrity, familial relationships, and procreation. Most obviously, the right to terminate a pregnancy arose straight out of the right to purchase and use contraception. In turn, those rights led, more recently, to rights of same-sex intimacy and marriage. They are all part of the same constitutional fabric, protecting autonomous decision-making over the most personal of life decisions."

Disapproving the Court's reversal of reproductive rights and the status of women as free and equal citizens in the United States, the dissent indicated at the possibility that a State can now transform what, when freely undertaken, is a wonder into what, when forced, may be a nightmare.

The liberal bloc also condemned the recent spate of laws passed by various conservative-majority states and further argued that the ruling gives states free rein to curtail abortion at any stage whether it be after "ten weeks, or five or three or one-or again, from the moment of fertilization." They warned that states could prevent women from having abortions even if they face death or physical harm.

It may be noted that more than half of U.S. states have already or will pass laws that ban abortion, while a multitude of others have strict regulations on the procedure. Close to 21 states either have pre-existing or pending state-level abortion bans that were slated to go into effect following the Supreme Court's Friday ruling to overturn Roe.

"Under the majority's ruling, though, another State's law could do so after ten weeks, or five or three or one—or, again, from the moment of fertilization. States have already passed such laws, in anticipa- tion of today's ruling. More will follow. Some States have enacted laws extending to all forms of abortion procedure, including taking medication in one's own home. They have passed laws without any exceptions for when the woman is the victim of rape or incest. Under those laws, a woman will have to bear her rapist's child or a young girl her father's—no matter if doing so will destroy her life. So too, after today's ruling, some States may compel women to carry to term a fetus with severe physical anomalies—for example, one afflicted with Tay-Sachs disease, sure to die within a few years of birth. States may even argue that a prohibition on abortion need make no provision for protecting a woman from risk of death or physical harm. Across a vast array of circumstances, a State will be able to impose its moral choice on a woman and coerce her to give birth to a child", the dissent read.

The justices also warned of how far state leaders could push this newfound power, even beyond imposing criminal penalties on abortion providers. Addressing the disparities that will arise from the ruling, it was pointed out that Americans with low incomes will not be able to afford to travel across state lines for the procedure.

While acknowledging the expansive personal and economic costs associated with the repercussions of this ruling, the justices emphasised,

"Those without money or childcare or the ability to take time off from work — will not be so fortunate. Maybe they will try an unsafe method of abortion, and come to physical harm, or even die. Maybe they will undergo pregnancy and have a child, but at significant personal or familial cost...At the least, they will incur the cost of losing control of their lives. The Constitution will, today's majority holds, provide no shield, despite its guarantees of liberty and equality for all."

They also warned that, without a constitutional protection to hold them back, many states will surely go further — and could eventually target women receiving care, not just the doctors providing it.

In an unusually damning language, the dissenters also buried Constitutional originalism by opining, "Those responsible for the original Constitution, including the Fourteenth Amendment, did not perceive women as equals, and did not recognize women's rights,".

They further emphasised, "When the majority says that we must read our foundational charter as viewed at the time of ratification (except that we may also check it against the Dark Ages), it consigns women to second-class citizenship."

Highlighting that the legitimacy of the Court is formed over time, and that its reputation can be tarnished "much more quickly", the dissent argues that by putting a woman's personhood at risk the Court betrays its guiding principles.

While lamenting about what it really means to be 'an American', the dissenting judges stated that the foundational ethics of the Constitution is guided by the principle of upholding the right of individuals even in the face of political and public opposition.

"Those legal concepts, one might even say, have gone far toward defining what it means to be an American," the justices wrote. "We believe in a Constitution that puts some issues off limits to majority rule. Even in the face of public opposition, we uphold the right of individuals—yes, including women—to make their own choices and chart their own futures. Or at least, we did once."

Without mincing any words, the justices decried the court for curtailing women's rights by a ruling that appears to be governed by power and untethered to law, precedent or reason. Highlighting the enormity of the consequences of this ruling vis-a-vis decade old precedents, they stated,

"Power, not reason, is the new currency of this court's decision-making. Roe has stood for 50 years. Casey, a precedent about precedent specifically confirming Roe, has stood for 30. And the doctrine of stare decisis – a critical element of the rule of law – stands foursquare behind their continued existence. The right those decisions established and preserved is embedded in our constitutional law, both originating in and leading to other rights protecting bodily integrity, personal autonomy, and family relationships. The abortion right is also embedded in the lives of women – shaping their expectations, influencing their choices about relationships and work, supporting (as all reproductive rights do) their social and economic equality. Since the right's recognition (and affirmation), nothing has changed to support what the majority does today. Neither law nor facts nor attitudes have provided any new reasons to reach a different result than Roe and Casey did. All that has changed is this court."

Attacking Justice Brett M. Kavanaugh's concurrence claiming that the Court is simply being neutral on the issue of abortion, the judges quipped- "His idea is that neutrality lies in giving the abortion issue to the States, where some can go one way and some another. But would he say that the Court is being 'scrupulously neutral' if it allowed New York and California to ban all the guns they want?"

Echoing the sentiments of millions of Americans and the rise of sweeping radical changes to constitutional guarantees, the justices brazenly state,

"The majority has overruled Roe and Casey for one and only one reason: because it has always despised them, and now it has the votes to discard them. The majority thereby substitutes a rule by judges for the rule of law."

"With sorrow—for this Court, but more, for the many millions of American women who have today lost a fundamental constitutional protection—we dissent,".