Rudraksha Or Cross Aren't Comparable To Hijab As They Are Worn Inside Dress, Says Justice Hemant Gupta During Hearing 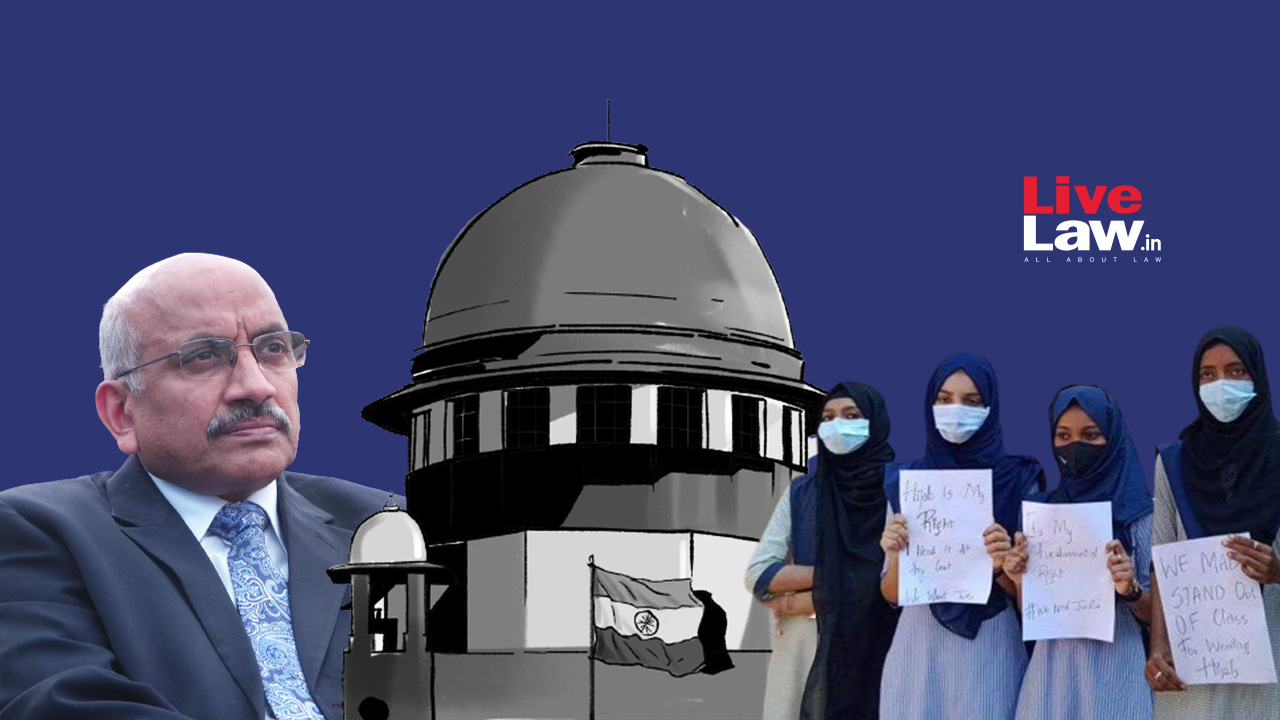 On Wednesday, a Division Bench of the Supreme Court of India continued to hear the challenge against the decision of the Karnataka Government to ban headscarves or the hijab in government colleges. A batch of 23 petitions was filed in this connection, some of which were writ petitions filed directly before the Supreme Court, while others were appeals by special leave preferred against...

On Wednesday, a Division Bench of the Supreme Court of India continued to hear the challenge against the decision of the Karnataka Government to ban headscarves or the hijab in government colleges. A batch of 23 petitions was filed in this connection, some of which were writ petitions filed directly before the Supreme Court, while others were appeals by special leave preferred against the judgement of the Karnataka High Court upholding the ban on the hijab. The Bench comprised Justices Hemant Gupta and Sudhanshu Dhulia.

Senior Advocate Devadatt Kamat, appearing on behalf of students from Kundapura, argued at length about the unconstitutionality of the Government Order dated February 5, 2022, placing particular emphasis on the principles of 'reasonable accommodation' and 'positive secularism'. Mr Kamat's objective, which he disclosed at the outset, was to persuade the Bench to refer the matter to a Constitution Bench under Article 145(3).

On behalf of the aggrieved petitioners from Kundapura, Senior Advocate Devadatt Kamat highlighted the principle of 'reasonable accommodation', which he said had been assimilated in the Indian constitutional jurisprudence, having been granted the imprimatur by a number of decisions, especially those written by Justice (Dr.) D.Y. Chandrachud. Mr Kamat explained that this doctrine could be traced back to American and South African Courts and proceeded to place significant reliance on a number of foreign judgements. The major thrust of his argument was the decision of the Constitutional Court of South Africa, whereby a local school, which had prevented an Indian-origin girl from wearing a nose ring, was ordered to "reasonably accommodate different religious and cultural practices".

Mr Kamat also relied on the judgement of Justice Scalia of the United States Supreme Court in a case discussing the permissibility of wearing headscarves in workplaces and the decision of the English House of Lords distinguishing between reasonable accommodation (hijab and salwar-kameez) and unreasonable accommodation (jilbaab). Mr Kamat also explained that he relied on these decisions rendered by foreign courts not because they had any authoritative value in the present context but because they encapsulated the crux of the arguments advanced by him. The Bench, however, was unwilling to accept the proposition in its entirety, pointing out that the societal ethos and culture of a conservative nation like India were dissimilar.

Justice Gupta : How can we compare USA and Canada with India? We are a conservative society.

J Gupta : Their judgments is based on their society,their culture, we can't totally follow.#Hijab #SupremeCourt

Next, Mr Kamat brings out the contrast between negative and positive secularism, with the former, adopted in countries like Turkey and France, mandating a clinical separation from all religion and religious activities, while the latter requires the State to enable the exercise of fundamental rights and the religious freedoms of all communities. Indian secularism has an overwhelmingly positive content, Mr Kamat argued. According to him, the Indian interpretation of secularism stems from the Vedic percept of Sarva Dharma Sama Bhava. In support of his contention, he placed reliance on Aruna Roy v. Union of India [AIR 2002 SC 3176]. He also explained how Dr B.R. Ambedkar had staunchly refused to accept a proposed amendment introduced during the framing of the Constitution seeking to ban any visible signs or indicators of religion. Dr Ambedkar had said that it was against the principle of positive secularism. It was this spirit of positive secularism, Mr Kamat submitted, that was violated by the impugned GO. He pointed out how students coming to schools and colleges wear rudraksha mala, cross, namam, and other religious ornaments. Unwilling to accept this analogy, Justice Gupta explained that such ornaments, albeit religious in nature, are usually concealed and not overtly visible.

Justice Gupta : Rudraksh or Cross is different. They are worn inside dress, not visible to others. There is no violation of discipline. #Hijab #SupremeCourt

Further, Mr Kamat submitted that the GO is violative of the right to equality enshrined in Article 14 as it specifically targeted the visible manifestation of only one religion. On the issue of the freedom of expression under Article 19(1)(a), he relied on National Legal Services Authority (NALSA) v. Union of India [AIR 2014 SC 1863], which accepted that dress may be a part of identity. Incensed by this line of argument, Justice Gupta exclaimed that the right to dress cannot be taken to illogical lengths and would not include, for instance, the right to undress. Acceding, Mr Kamat explained that it could not be said that wearing of an additional layer would be prohibited as a part of reasonable restrictions under Article 19(2), since none of the grounds mentioned in the provision is made out.

Justice Gupta : You can't take it to illogical ends. Right to dress will include right to undress also?

Kamat : Nobody is undressing in a school.#Hijab #SupremeCourt

With respect to the right to privacy read into the right to life and liberty under Article 21, Mr Kamat quoted the following paragraph from the nine-Judge Bench judgement in Justice K.S. Puttaswamy (Retd.) v. Union of India [AIR 2017 SC 4161]:

He claimed that the High Court had violated the principles of decisional autonomy and gone against the pro-choice jurisprudence developed under Article 21 by the Supreme Court.

Mr Kamat also argued that the prohibition on wearing of the hijab was not justified either under Article 25(1) or Article 25(2), both of which circumscribe the freedom of conscience and free profession, practice and propagation of religion under Article 25. The question of whether it was an essential religious practice should have only been broached after first analysing whether the restriction in the way of a hijab ban was reasonable. If such a restriction were found to have been reasonable, the doctrine of essential religious practice did not need to be pressed into service, Mr Kamat contended. He said that by not doing so, the Karnataka High Court had "bought the cart before the horse".

Finally, Mr Kamat submitted that the right to education and the "right to access to education" has been recognised as fundamental rights by the Supreme Court in Society for Unaided Private Schools of Rajasthan v. Union of India [(2012) 6 SCC 102], albeit in the context of primary education. However, once such rights gained recognition as important constitutional values, then the Court cannot deprive students of the same on the ground that they had decided to cover their heads in educational institutions.

The hearing in the case will continue tomorrow.