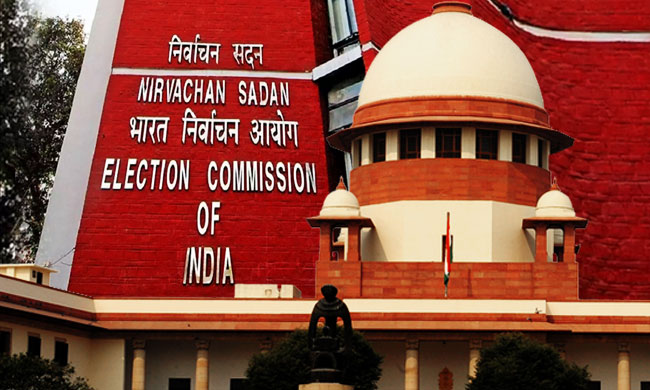 "The recourse to Paragraph 16A in all cases may not be called for. Your Lordships may censure the political parties and see how an election or two fan out with the threat of 16A hanging over their heads. If nothing is done, the 16A route can be gone down", Senior Advocate Harish Salve, for the Election Commission of India, told the Supreme Court on Tuesday. The bench of Justices...

"The recourse to Paragraph 16A in all cases may not be called for. Your Lordships may censure the political parties and see how an election or two fan out with the threat of 16A hanging over their heads. If nothing is done, the 16A route can be gone down", Senior Advocate Harish Salve, for the Election Commission of India, told the Supreme Court on Tuesday.

The bench of Justices Rohinton Nariman and B. R. Gavai was considering a contempt petition filed by advocate Brajesh Singh where he claims to be aggrieved by the conduct of the respondents during the Bihar Legislative Assembly Election of 2020, alleging wilful disobedience of the Court's judgement of February 13, 2020. In the said judgment, it was held it shall be mandatory for political parties at the Central and state election level to upload on the website detailed information regarding individuals with pending criminal cases (including the nature of the offences and the relevant particulars such as whether charges have been framed, the concerned court, the case number etc) who have been selected as candidates, along with the reasons for such selection, as also as to why other individuals without criminal incidents could not be selected as candidates.

"If parties have not filed affidavits in time or have made insufficient disclosures, Your Lordships may reign them in. If there is egregious default by the parties, then the EC has to take action- The final action is to freeze the symbols if the compliance is refused or if the compliance is a sham. But there are also concerns about too many parties being thrown out of the political arena. For the symbols to be frozen if you trip a wire, that would require a change in the real polity of the country. For that, it is necessary to see the problems and have a wider debate", explained Mr. Salve.

"The value system has to be thrust down the parties' throats. The compliance of Your Lordships' judgment is of utmost importance. They have to be made to understand that compliance is not optional and that there is the final action under 16A of taking away the symbol...", he continued.

Mr. Salve asserted that the change has to come from the heart of the people, that we have come this far and that 10 years back nobody could have imagined political parties being hauled up in contempt for failing to disclose criminal antecedents of their candidates- "The gun is already there on their head! One or more contempts like this, and they will fall in line and the compliance will become routine. For egregious cases, 16A is there ofcourse"

"I remember the time when the Solicitor General was defending the law that said declaration of criminal antecedents cannot be mandatory. Your Lordships struck it down. There was a rumpus, but now a change has come. In an election or two, people will realise what has to be done", he continued.

"We are certain that the legislative branch will not take this forward, not only in the foreseeable future, but at any time in the future", commented Justice Nariman.

"Candidates are selected for a variety of reasons. Winnability is the universal criteria. Your Lordships are doing this for the good of the country. But the voters also need to realise this. They keep on voting for the same candidates. Your Lordships have to balance these considerations. 16A is not called for in all cases", Mr. Salve said.

Mr. Salve suggested that because there is a breach of the Court's order, consequences must follow, that the preferred course of action may be to impose appropriate sanctions in the form of monetary penalty. "But I only have one request to make- if Your Lordships impose a sanction, let it not be Re.1 so that people have photographs taken of themselves posing with a Re. 1 coin with smiles on their faces", he concluded.

Senior Advocate Vikas Singh, also appearing for the ECI, advanced that political parties are deciding the names of the candidates on the last date of nomination, that the name is just logged in without any discussion and then routine affidavits are filed. "There has to be some sort of a churning exercise. You have to have some clarity as to the candidates. What is happening today is that it is the party which remains in the election and the candidates become inconsequential", he insisted.

To this end, he urged that the Court direct that elections must be declared more than 2 weeks before the notification of the first phase; a discussion, by political parties regarding names of candidates, must happen 3 weeks before the last date of nomination; and that the parties must declare their selected candidates 2 weeks in advance.

"The cases against candidates are of Rape, murder etc. Can a political party take a stand that this was the first case when a charge sheet has been filed? It can't be. For a political party to say that the charges are not made out when a judge has applied his mind and framed a charge? I can understand if you formed a part of an assembly and committed an offence while the election is ongoing, but these are offences which the political party cannot justify! Despite this requirement of bringing out the criminal antecedents in public domain, the criminalisation has already gone up. It has not gone down 1%. In every successive election, the people are larger in number. The disclosure requirement has not worked. Every candidate is declared on the last day or one day before! That is why we need the direction of two weeks before!", advanced Mr. Singh.

Mr. Salve intervened to say that these are not the instructions of the ECI and that Mr. Singh is perhaps assisting the Court as a member of the bar- "The ECI's position is not this. The Election Commission does not intend to do any of this, these are my instructions...Indira Gandhi's case says that the moment you declare someone a candidate, the election expenses will get counted. So this can't work. To select the candidate is the most critical process. The political parties have a political disquiet over this"

Mr. Singh clarified that there is no conflict between the stands of Mr. Salve and himself, that the aforesaid was his suggestion as an officer of the court, and that it is Mr. Salve's view that would prevail.

The bench also noted that a direction as sought by Mr. Singh cannot be passed in view of section 30 of the Representation of People's Act which deals with the appointment of dates for nominations, etc. The bench also pointed out instances where candidates declared by national parties have had their nominations withdrawn on the last date.

In the judgement of February 13, 2020, the court had required the details of criminal antecedents to be published within 48 hours of the selection of the candidate or not less than 2 weeks before the first date for filing of nomination, whichever is earlier. It may be noted that the February 13, 2020 judgement of the Court further required the political party concerned to submit a report of compliance with these directions with the Election Commission within 72 hours of the selection of the said candidate. The Court had provided that if a political party fails to submit such a compliance report, the commission shall bring such non-compliance to the notice of the Supreme Court as being in contempt of the Court's directions.

It was the case of the contempt-petitioner that all of the parties contesting the Bihar elections deliberately defied the orders of the Court by choosing to publish their criminal antecedents by and large in one newspaper which did not have wide circulation in the state as compared to other prominent newspapers. Further, all prominent political parties had given a common reason for selecting candidates with criminal antecedents- their being more popular than any other candidate and the greater probability of winning- which is against the Court's direction Which had specifically required the reasons to be in terms of the qualifications, achievement and merit of the candidate and not winnability at the polls. Besides, it is contended that only an incomplete description of the offences with which the candidates are charged had been given.

Although several political parties are arrayed as alleged contemnors for wilful disobedience during the Bihar Legislative Assembly Election of 2020 of the Court's judgement of February 13, 2020, primarily, the NCP and the CPI(Marxist) are in the docks for failing to comply at all.