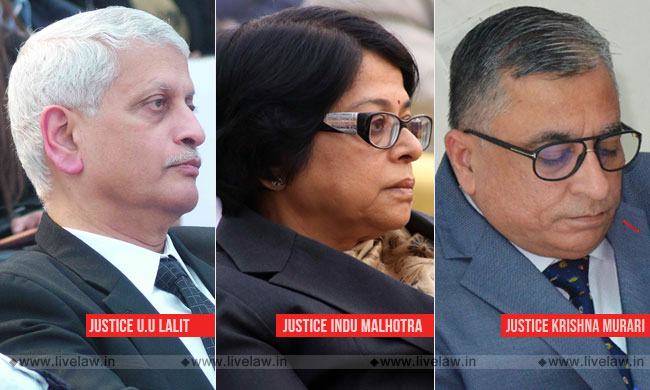 The Supreme Court has acquitted a man who was sentenced to death in a dacoity with murder case.

In this case, six accused, were convicted by the Trial Court finding them guilty of offences punishable under Sections 396, 412 of Indian Penal Code and under Section 3(2)(v) of the Scheduled Castes and Scheduled Tribes (Prevention of Atrocities) Act. One of them, Hari Om @ Hero was awarded death sentence. They were accused of committing murder of a women and her three children (two of them were minors).

In appeal and death reference, the High Court upheld the death sentence awarded to Hari Om and upheld conviction and sentence imposed on two others, while acquitting other three. The three convicts, including Hari Om, therefore approached the Apex Court.

In appeal, the bench comprising Justices Uday Umesh Lalit, Indu Malhotra and Krishna Murari observed that it does not find it safe to rely on the version given by the child witness [youngest son of the deceased] in the instant case, who was about five years of age when the incident had occurred. The court, on reappreciating the evidence on record, noted that there are certain inconsistencies or infirmities in his deposition.

"Even if we accept that accused Hari Om was a known face to PW5 Ujjwal, and the fact that the incident occurred inside the house where PW5 Ujjwal would naturally be available, but on the issue whether he had witnessed the incident, the glaring inconsistencies on record cannot be discarded. "
"in Radhey Shyam vs. State of Rajasthan, the evidence of a child witness was not found to be inspiring confidence because of inconsistencies in the version of the witness, as well as because of the absence of corroboration from the other prosecution witnesses. In the circumstances, we do not find it safe to rely on the version given by the child witness in the instant case, who was about five years of age when the incident had occurred."

The court observed that there is no material on record sufficient to record conviction of accused Hari Om for the offence under Section 396 IPC, and he must be held entitled to benefit of doubt. Regarding the other two accused, the bench observed that, apart from the fingerprints, there was nothing else on record against them. "Even if we accept that fingerprints lifted from the house of the deceased could be associated with the said two accused, that by itself, in the absence of any substantive piece of evidence, cannot be made the basis of their conviction. These accused are therefore entitled to the benefit of doubt", the court said while allowing the appeals.