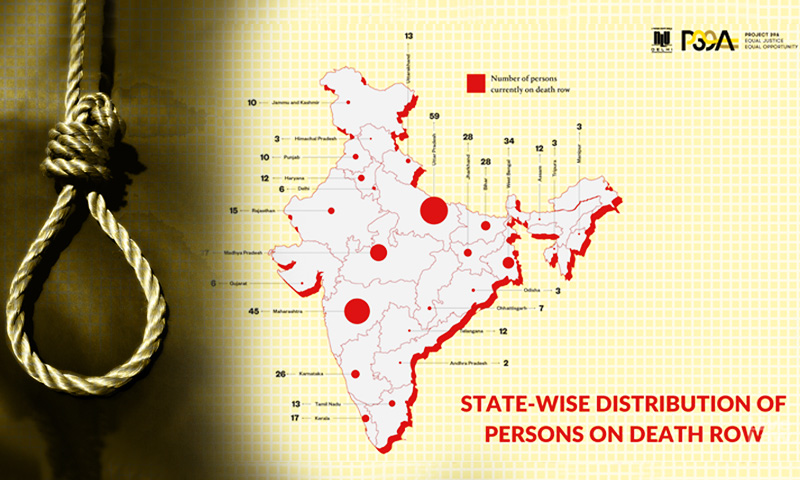 Project 39A at National Law University, Delhi published the fifth edition of the Death Penalty in India: Annual Statistics Report which provides an annual update on all death penalty cases in India alongwith documenting the legislative developments on the issue. As on 31st December 2020, there were 404 prisoners on death row across India, with Uttar Pradesh having the highest number...

Project 39A at National Law University, Delhi published the fifth edition of the Death Penalty in India: Annual Statistics Report which provides an annual update on all death penalty cases in India alongwith documenting the legislative developments on the issue. As on 31st December 2020, there were 404 prisoners on death row across India, with Uttar Pradesh having the highest number of such prisoners at 59. The functioning of courts across India was hampered by the COVID-19 pandemic, resulting in a significant drop in the number of death sentences imposed by trial courts to 77, as compared to 103 in 2019. However, there was an increase in the proportion of death sentences imposed for cases involving sexual offences by trial courts from 53% in 2019 to 65% in 2020. March 2020 also saw the execution of Mukesh, Vinay Sharma, Akshay Kumar Thakur and Pawan Gupta for gang rape and murder of a young woman in December 2012.

Dr. Anup Surendranath, Executive Director, Project 39A said: "Tracking the death sentences across trial courts, High Courts and the Supreme Court since 2016 has given us revealing insights into the shifts in discourse and the enforcement of the death penalty. In the aftermath of the Hyderabad gangrape case in late 2019 and the clamour for executing those sentenced to death in the Delhi gangrape case, the first 3 months of 2020 saw a very high number of death sentences. Then the Covid-19 pandemic hit and the resulting impact on the functioning of courts slowed the number of death sentences in 2020. The proportion of death sentences involving sexual offences once again constitutes a majority of the total cases and comprised 65% of the death sentences this year. This increased utilisation of the death penalty for sexual offences is a significant development that requires further empirical and qualitative examination." 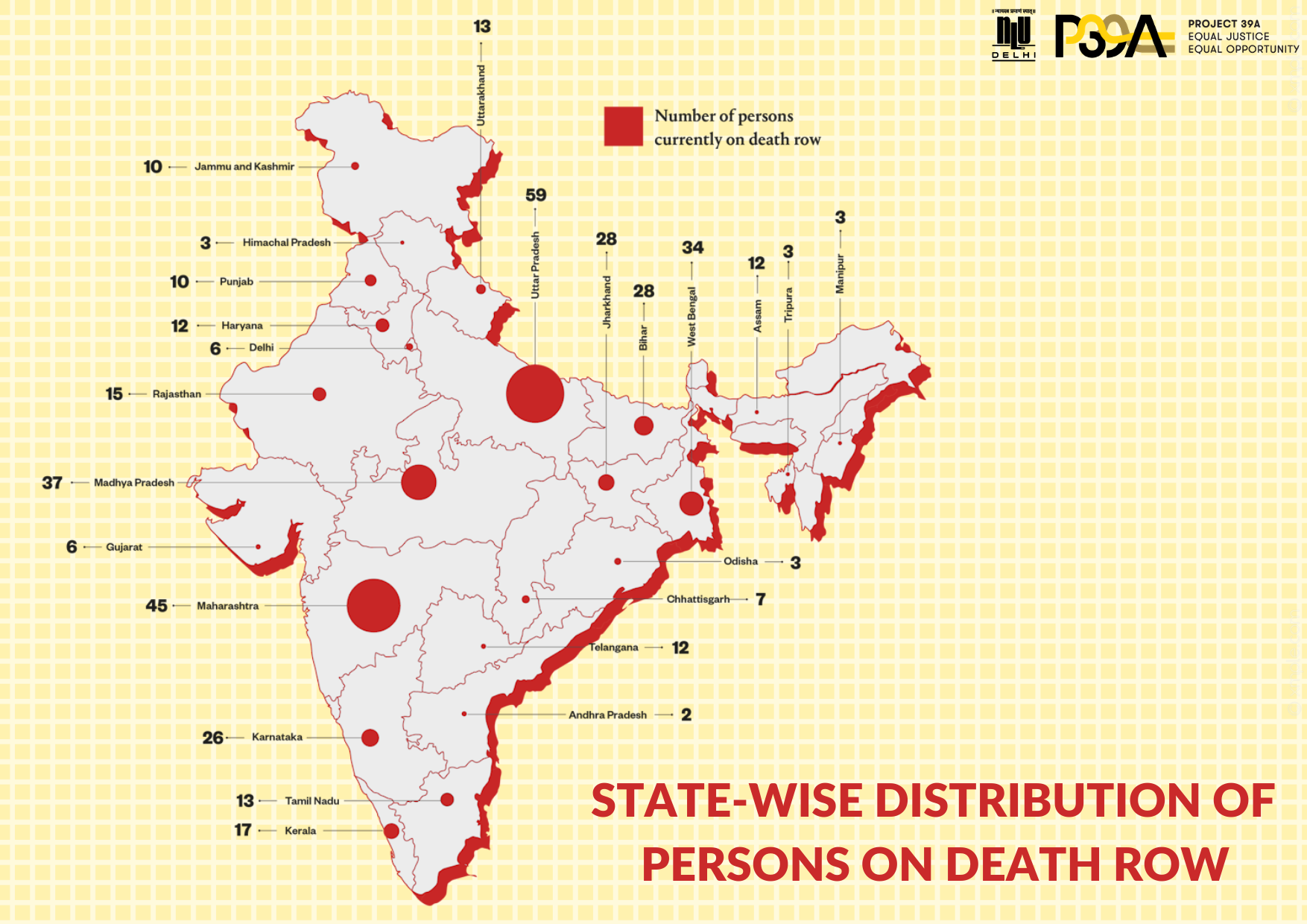 For documentation of this data, reliance is placed on online English and Hindi news portals to track reports of the imposition of the death penalty by sessions courts. This is then verified using information from district court and High Court websites. RTIs are sent to Home Departments and High Courts as a second level of verification, when High Court websites prove unreliable. This method has been consistently employed for all five editions of the report published since 2016.

The functioning of courts was severely constrained due to the onset of the COVID-19 pandemic and the imposition of the lockdown in March 2020. In 2020, sessions courts imposed 77 death sentences in cases involving 76 prisoners, a marked drop from the 103 sentences imposed in 2019. Yet, the 48 death sentences imposed within the first three months of the year prior to the imposition of the lockdown, amounting to nearly 62% of last year's total, indicate that the total figure this year would likely have been significantly higher in the absence of the pandemic. 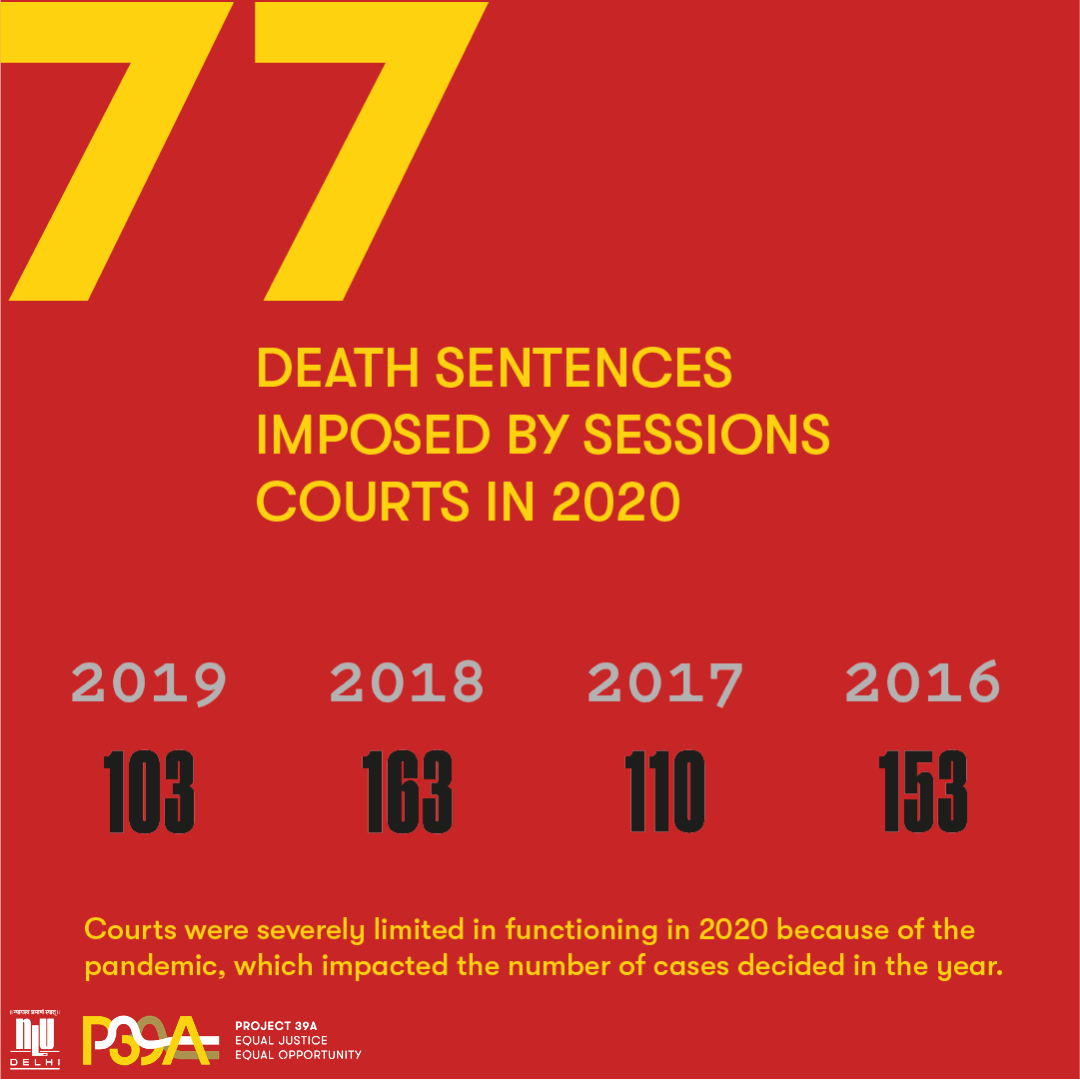 Of the 76 death imposed by the sessions courts this year, 50 were for offences involving sexual violence. 24 death sentences were imposed for murder (simpliciter) and two for kidnapping with murder. 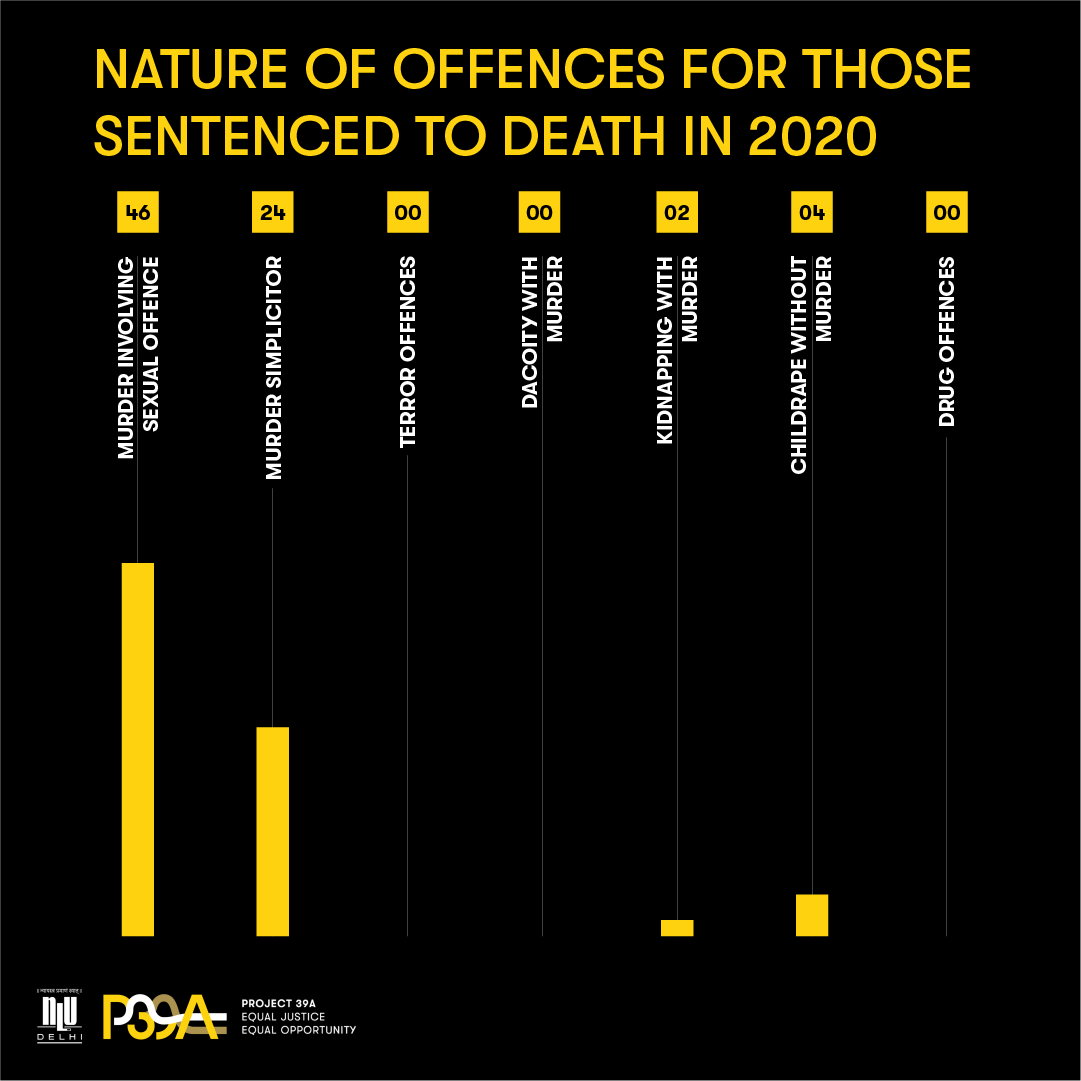 High Courts across the country adjudicated 30 death penalty cases involving 38 prisoners. Death sentence was confirmed in three of these cases, with two involving sexual offences and one involving the offence of murder. High Courts commuted death sentences in 17 cases. Five prisoners who had been sentenced to death by trial courts were acquitted of all charges by the High Courts. In five cases, High Courts remitted the case back to trial courts for readjudication. 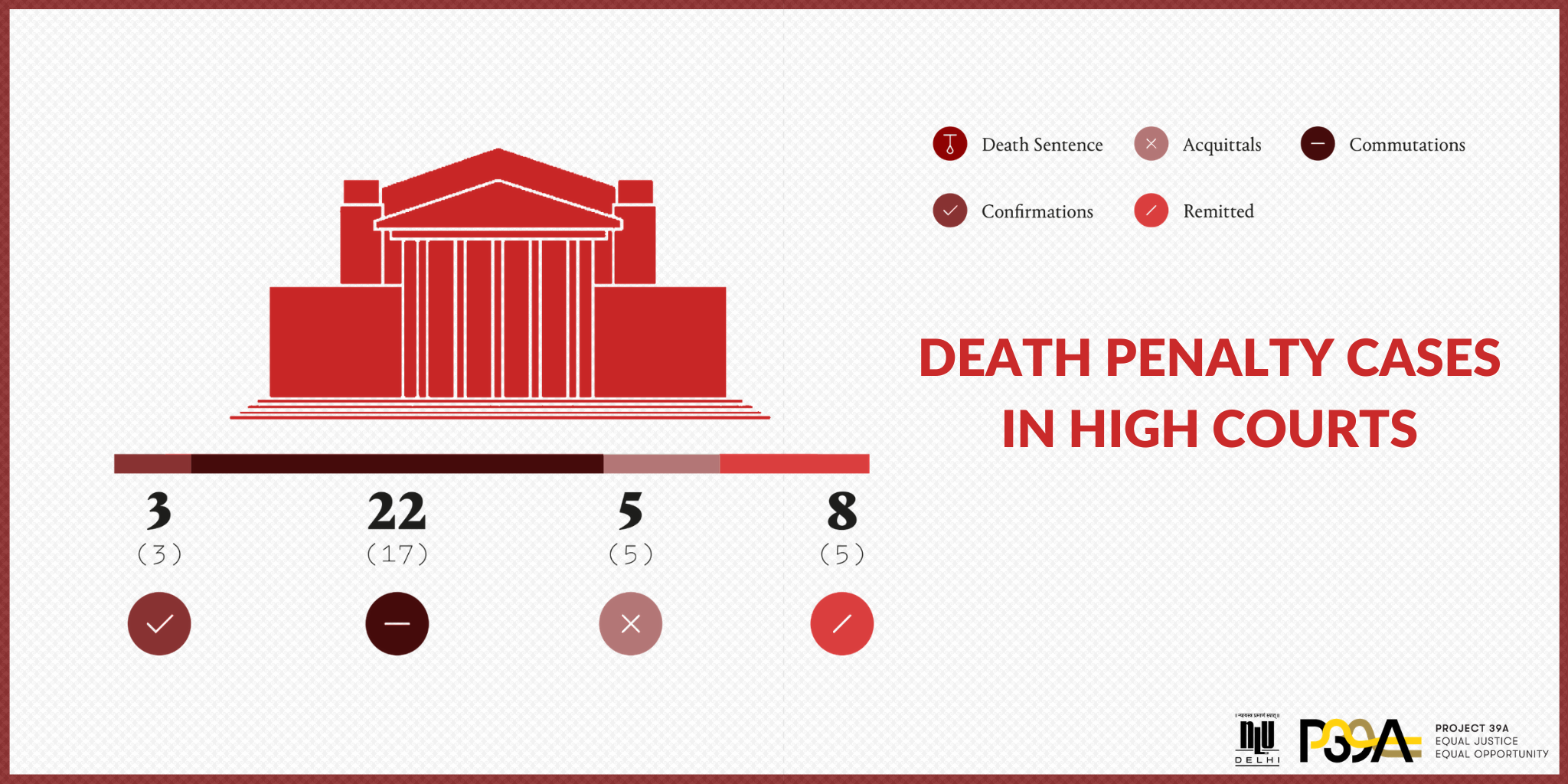 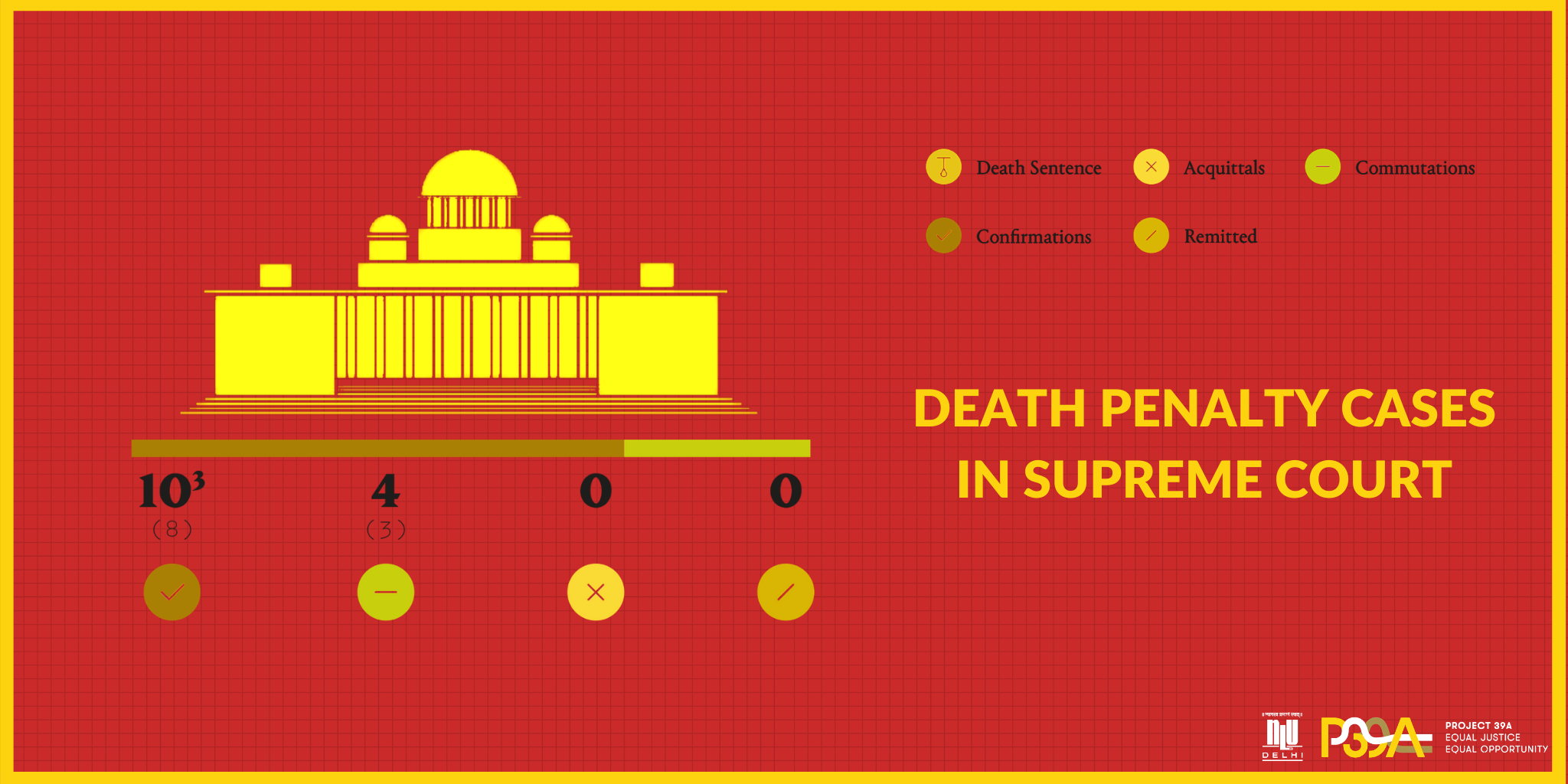 Mukesh, Vinay Sharma, Akshay Kumar Thakur and Pawan Gupta were executed in March 2020 in Tihar Jail, New Delhi for the rape and murder of a young woman in December 2012. The last execution prior to this was the execution of Yakub Memon in July 2015.

Project 39A announces the release of 5th edition of The Death Penalty in India: Annual Statistics 2020 Report. 404 prisoners were on death row in India as of 31 December 2020.
For more info on death penalty cases in 2020, see our full report here - https://t.co/jqTuP07Uwk pic.twitter.com/gAHr0RHxyS

The four prisoners were sentenced to death by a Special Fast Track Court in September 2013. Their sentences were confirmed by the High Court of Delhi in March 2014 and subsequently by the Supreme Court in May 2017. Review petitions, curative petitions, mercy petitions and related proceedings were decided in 2019 and early 2020. Death warrants were issued four times in 2020, but the Delhi district judiciary repeatedly upheld the right of the convicts to exhaust all legal remedies before the death warrant could be executed.

The Maharashtra legislature is presently considering the Special Courts and Machinery for the Implementation of Shakti Act 2020 and the Maharashtra Shakti Criminal Law (Maharashtra Amendment) Act, 2020, which introduce the death penalty for rape and acid attack by amending provisions in the Indian Penal Code (IPC) and the Protection of Children from Sexual Offences (POCSO) Act. In addition, the bills increase the punishment for various offences relating to sexual violence and set out expedited processes by limiting investigation to 15 days and trial and disposal of the case to 45 days from filing of the chargesheet.

In contrast, the Andhra Pradesh Disha (Special Courts for Specified Offences against Women and Children) Bill 2020, which was a revised version of the bill passed in 2019, reportedly dropped the death penalty as an offence. The bill currently awaits Presidential assent.