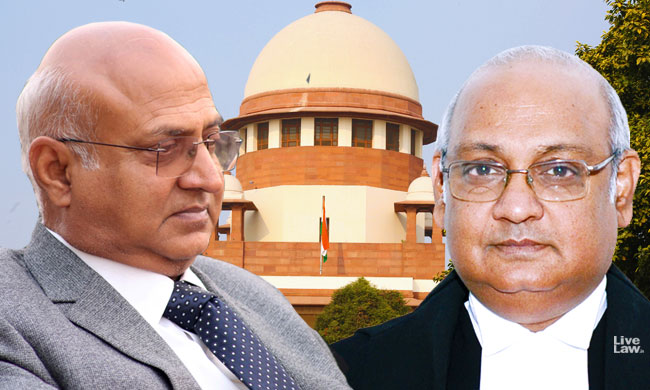 x
Such decree can be set aside under Order IX, Rule 13 CPC, if defendant makes out sufficient grounds.

The Supreme Court has held that a decree passed after taking plaintiff's evidence, without the appearance of defendant at the trial stage, is an ex-parte decree, which could be set aside under Order IX Rule 13 of the Code of Civil Procedure.The bench of Justice A M Sapre and Dinesh Maheshwari passed the order in the case G.Ratna Raj by LRs vs Sri Muthukumaraswamy Permanent Fund Ltd, which was...

The Supreme Court has held that a decree passed after taking plaintiff's evidence, without the appearance of defendant at the trial stage, is an ex-parte decree, which could be set aside under Order IX Rule 13 of the Code of Civil Procedure.

The bench of Justice A M Sapre and Dinesh Maheshwari passed the order in the case G.Ratna Raj by LRs vs Sri Muthukumaraswamy Permanent Fund Ltd, which was an appeal against a High Court judgment, which set aside a preliminary decree under Order IX Rule 13 CPC.

The preliminary decree was passed in a suit for redemption of mortgage. Though the defendants had made appearance and filed written statement, they did not appear at the stage of evidence. So, the plaintiff's evidence was recorded in the absence of defendant. The defendant's evidence was closed on its non-appearance.

Questioning the High Court's order, the plaintiffs came in appeal in SC.

The SC first analysed whether the trial court proceeded under Rule 2 or Rule 3 of Order 17 CPC.

Order 17, Rule 2 CPC stated that in the event of non-appearance of a party to the suit, the Court may proceed to dispose of the suit in any of the modes specified in Order IX. However, Explanation to Rule 2 said that if evidence or substantial portion of evidence of any party has been recorded, and such party fails to appear, then the Court may proceed to decide the case.

Order 17, Rule 3 CPC dealt with situations where a party commits default in producing evidence or witnesses, or in performing any act necessary for the progress of the suit, for which time was granted. In such cases, the Court may proceed to decide the suit, notwithstanding the default, if parties are present( Rule 3(a)). If parties are, or any of them is, absent, the Court may proceed in the manner specified in Order IX(Rule 3(b)).

Order IX Rule 6(a) specified that in the absence of defendant, the Court may proceed the suit ex-parte, if defendant has been duly served.

So, the issue before the Court was whether the decree was passed by taking recourse to Order IX, or by invoking Explanation of Rule 2, Order 17 on the basis of plaintiff's evidence.

"in our view, the case at hand would not fall under Explanation to Order 17 Rule 2 of the Code because in order to attract the Explanation, "such party" which has led evidence or has led substantial part of the evidence, if fails to appear on any day to which the hearing of the case is adjourned, the Court may treat "such party" as "present" on that day and is accordingly empowered to proceed in the suit".

The Court proceeded to observed :

"In this case, the party, who was absent and was proceeded ex parte was the "defendants" and they had not led any evidence whereas it was the plaintiff, who was present and had led his evidence".

It was found that the Court proceeded under Order 17 Rule 2  by taking recourse to Order IX Rule 6(a) against the defendant.

"The Trial Court did proceed to hear the suit ex parte by taking recourse to the Order 9 Rule 6 (a) in terms of Order 17 Rule 2 of the Code because on that day, the plaintiff was present when the suit was called on for hearing whereas the defendants were absent despite service of summons and accordingly the Trial Court passed the preliminary decree. Such decree, in our opinion, was an "ex parte decree" within the meaning of Order 9 Rule 6 (a) read with Order 9 Rule 13 of the Code and, therefore, could be set aside under Order 9 Rule 13 on making out a sufficient ground by the defendants", held the judgment authored by Justice Sapre.

The bench followed the 2003 SC judgment in B. Janakiramaiah Chetty vs. A.K. Parthasarthi & Ors in reaching its conclusion.