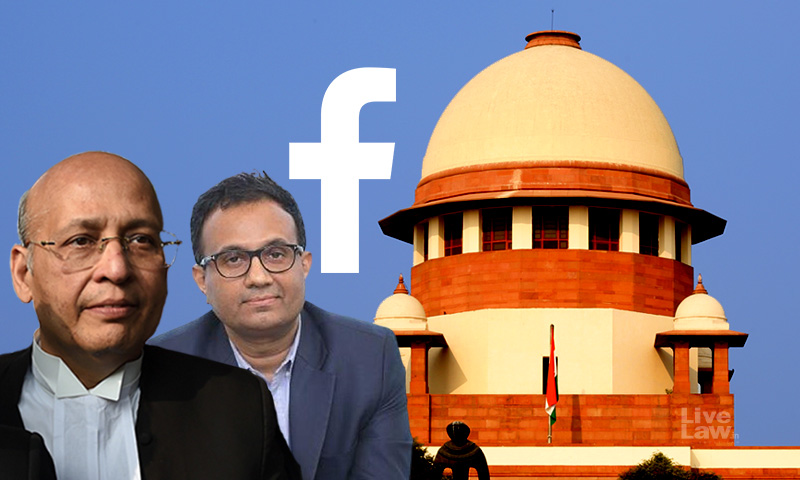 The Supreme Court on Thursday continued to hear Facebook India Vice President, Ajit Mohan's challenge to the two summons issued by the Delhi Legislative Assembly's Committee On Peace and Harmony asking him to appear before it for enquiry into the role of fake news behind the Delhi riots of February 2020. Dr. Abhishek Manu Singhvi, senior counsel appearing on behalf of the Delhi Assembly...

The Supreme Court on Thursday continued to hear Facebook India Vice President, Ajit Mohan's challenge to the two summons issued by the Delhi Legislative Assembly's Committee On Peace and Harmony asking him to appear before it for enquiry into the role of fake news behind the Delhi riots of February 2020.

The main thrust of today's arguments advanced by Dr. Singhvi rested on two aspects - firstly, how the Delhi Legislative Assembly derives powers to constitute a committee under List 2 and List 3 of the Constitution and secondly, how the issue of privileges is irrelevant to the case.

Dr. Singhvi began by submitting that Entry 39 of List 2 and GNCTD Act of 1991 when read conjointly with other entries of List 2 will show that the Delhi Assembly has the powers to deal with subjects which are otherwise excluded under Art. 239AA.

"Entries cannot be read on a collusion course. Power of the State is coequal." Singhvi submitted.

Dr. Singhvi continued his emphasis on the issue of "premature abstract proceeding" having no live issue in the present matter as argued by him yesterday.

At this juncture, Justice Roy intervened and sought his clarification by asking:

"You are saying that a presumptive action anticipatory in nature has been followed in the case?"

To this, Dr. Singhvi replied "With all due respect I would like to adapt this phrase. The petitioner has created ghost of imagination by creating false assumptions. It is not right to say that I cannot suggest and discuss. It is bizarre to say so at this stage."

A rather important question was then asked by Justice Maheshwari "This Committee set up on 2nd March 2020...are you correlating subject of this committee with any of the list, whether List 2 or 3?"

Dr. Singhvi in his reply to the question informed the bench that the subject is conjointly and seamlessly found in many entries including entry 39 of List 2 and other ancillary entries under List 3.

According to Dr. Singhvi, peace and harmony is a subject of good governance for Govt. of NCT of Delhi and therefore it cannot be said that the Assembly did not have the power to discuss relating to peace and harmony.

To back up his submission, Dr. Singhvi referred to the recent constitution bench ruling in the case of Kalpana Mehta & Ors. v. Union of India (2018), highlighting a wider scope for Parliamentary and State committees, wherein the Court held that "Often committees have a multi-party composition. They examine specific matters of policy or government administration or performance. Indian parliamentary committees are a huge basin of information which are made available to the Members of Parliament in order to educate themselves and contribute ideas to strengthen parliamentary system and improve governance."

In view of this, Dr. Singhvi, while emphasizing on the word "improve governance", argued that since the events of Delhi riots happened in Delhi and not anywhere else, the Delhi Assembly was well within its competence to discuss about Delhi's peace and harmony.

At this juncture, Justice Kaul reminded Dr. Singhvi that the primary issue in this case is whether the Delhi Assembly has the jurisdiction on the subject of Delhi riots or not and that whether the bench will go into the larger issue of privileges will depend on the outcome of the case.

While concluding the hearing today, Justice Kaul mentioned in the order that a new notice has been issued by Respondent No. 1 i.e. Delhi Legislative Assembly and therefore in the account of this, the earlier two notices sent by the Committee of Peace and Harmony stands withdrawn.

Dr. Singhvi yesterday began his arguments by summarizing the key points of his submissions to be made before the Court. According to Mr. Singhvi, Mr. Salve had travelled across those areas in his arguments which do not primarily arise in the case, especially the jurisdictional question of privilege.

The primary contention raised by Mr. Singhvi was that the Court was dealing with a rather "premature abstract proceeding" which has "no live issue resulting in a premature ruling".

"Very quaintly and very ironically all these large issues arise in a premature abstract proceedings with no coercive steps taken, attendance not done, questions not asked, answers not seen but your lordships must decide by an abstract judgment to give an advance ruling." Singhvi submitted.

Reports of the previous hearings can be read here: