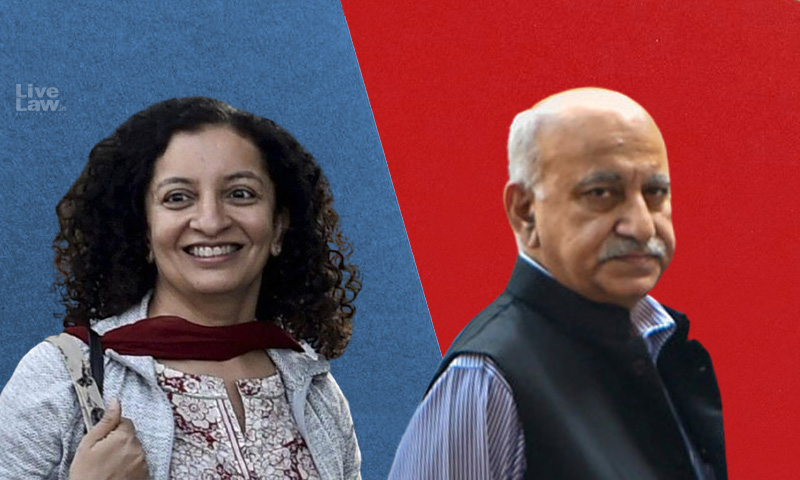 A Delhi Court on Wednesday acquitted journalist Priya Ramani in the criminal defamation case filed by former Union Minister MJ Akbar over the "metoo" sexual harassment allegations made by her."Woman has right to put her grievance at a platform of her choice even after decades", the Court observed. It observed that a man of social status can also be a sexual harasser."Sexual abuse takes...

A Delhi Court on Wednesday acquitted  journalist Priya Ramani in the criminal defamation case filed by former Union Minister MJ Akbar over the "metoo" sexual harassment allegations made by her.

"Woman has right to put her grievance at a platform of her choice even after decades", the Court observed. It observed that a man of social status can also be a sexual harasser.

"Sexual abuse takes away dignity and self confidence. Right of reputation can't be protected at the cost of right to dignity", the Court held.

"The society must understand the impact of sexual abuse and harassment on its victims", the Court observed taking particular note of the absence of Vishakha guidelines at the relevant time.

"Article 21 and the right to equality is guaranteed under the Constitution. She has full right to put up her case in any platform of her choice"

"Time has come for our society to understand that sometimes a victim may for years not speak up due to the mental trauma. The woman cannot be punished for raising her voice against sexual abuse", the order said.

"Woman has a right to put up the grievance at any platform of her choice even after decades. Woman cannot be punished for raising voice agains sex abuse . Right to reputation cannot be protected at the cost of right to dignity"

The court accepted the possibility of defence of accused that she made the disclosure after other women named Akbar as a sexual predator. The Court also accepted that Akbar was not a man of stellar reputation.

It accepted Ramani's contention that Akbar's claim of a stellar reputation was demolished by Ghazala Wahab's testimony, who was also allegedly sexually abused by Akbar.

The judgment was delivered by the Additional Chief Metropolitan Magistrate, Ravindra Kumar Pandey in open court in the presence of both parties.

Reacting to the verdict, Ramani said "I feel amazing, I feel vindicated to have my truth accepted in a court of law."

#PriyaRamani says after her acquittal in MJ Akbar's defamation case, "I feel amazing, I feel vindicated to have my truth accepted in a court of law." pic.twitter.com/KDefjsPOtx

"It's an amazing judgment, we feel grateful that the court has gone through the evidence so meticulously. The defense had put up a very, very strong rebuttal to the case of the complainant, that defense is upheld", John added.

The court had on Feb 1, 2021, reserved judgment in the case after hearing rebuttal arguments of Akbar and Ramani. The judgment which was originally reserved for February 10, was deferred for February 17 after the judge noted that the written submissions were submitted late to the court and therefore more time was needed to deliver the verdict.

The then Minister of State for External Affairs, Akbar initiated the defamation case after a slew of allegations of sexual harassment followed against him after Ramani's tweet. His case is that before Ramani's alleged defamatory tweet, he had enjoyed a "stellar reputation" in the society, which was damaged following her tweet and therefore she was liable for criminal defamation. Akbar has also claimed that Ramani's tweet had led to a social media trial against him, something that cannot be permitted in a lawful society.

Ramani, on her part, has claimed public interest, public good, and truth as her defense and argued that one accused of sexual misconduct cannot in the first place claim to have a stellar reputation, therefore was no question arising of the reputation being destroyed and defamation having occurred against Akbar.

Ramani was summoned by the Court in the case in January 2019 and released on bail in February 2019.

The arguments were earlier completed before Additional Chief Metropolitan Magistrate Vishal Pahuja. However, following his transfer to the Karkardooma Court in November 2020, the final arguments started again before ACMM Ravindra Kumar Pandey. The recording of evidence of the witnesses was done before ACMM Pahuja.

When ACMM Pandey took charge of the case, he had asked the parties if there was a chance to compromise. However, Ramani said that she was standing by her statements and refused to settle the matter.