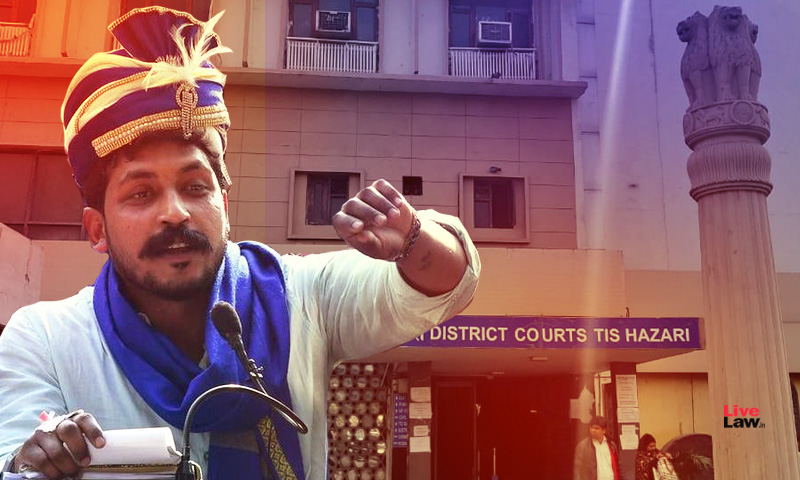 A Delhi Court on Wednesday granted bail to Bhim Army Chief Chandra Shekhar Azad, who has been under custody since December 21 for allegedly inciting violence during anti-CAA protests in Daryaganj.Additional Sessions Judge Dr. Kamini Lau of Tis Hazari courts imposed the condition that Azad should stay out of Delhi for a month and should remain in his native place Saharanpur in Uttar...

A Delhi Court on Wednesday granted  bail to Bhim Army Chief Chandra Shekhar Azad, who has been under custody since December 21 for allegedly inciting violence during anti-CAA protests in Daryaganj.

Additional Sessions Judge Dr. Kamini Lau of Tis Hazari courts imposed the condition that Azad should stay out of Delhi for a month and should remain in his native place Saharanpur in Uttar Pradesh during the said period.

"These are special circumstances. I do not want any trouble during Delhi elections", Judge Lau remarked.

"If he has dharnas planned, he should not carry them out for a month", added the Judge.

The Court however acceded to the request of Azad's counsel Mehmood Pracha to allow him to pay obeisance at Jama Masjid, Guru Ravidas Temple and Jor Bagh on his release. The judge said that Azad will be free to do in the next twenty four hours before he is escorted to Saharanpur.

Though Pracha attempted to persuade that Azad should be allowed to stay in Delhi, the Court did not relent. Pracha even undertook to keep Azad at his home in Delhi.  The Court however turned down the plea.

When Pracha submitted that Azad faces security threat in UP, the judge said that necessary protection for him will be ensured.

The Court said that the bail conditions will remain in force for a month. He can also seek modification of the conditions, when any other verified address is given. The Court insisted on his stay at Sahranpur on the ground that he had given that address to police.

Azad has to mark his presence with SHO in Saharanpur every Saturday for the next 4 weeks. He has also been asked to furnish a bail bond of Rs.25,000.

In case Azad has to visit AIIMS for his medical treatment, he has to first inform DCP(Crime), who will provide with him an escort.

Judge Lau : Azad should not stay in Shaheen Bagh.@BhimArmyChief @M_PRACHA

During yesterday's hearing, Judge Lau had heavily criticized the Prosecution for justifying Azad's arrest on the basis of his social media posts calling for protests. Every citizen has the constitutional right to protest, said the judge.

Today, the judge asked Advocate Mehmood Pracha, Azad's counsel, to read some of his tweets, which were the 'most incriminating'.

Pracha cited one of such tweets, which read :" Ambedkar said don't think I've died after I'm dead, I'll be alive till the Constitution is alive".

This is a tweet which 'incites' people to uphold the Constitution, commented Pracha.

Then he moved on to another tweet, which said "When Modi is scared he puts the cops forward".

This, the judge said, was "problematic". All our institutions, must be respected, she remarked. Azad's counsel clarified that the tweet was in the context of imposition of Section 144.

Pracha then referred to another tweet ""Ambedkarites don't engage in violence, those who are engaging are RSS people" .

The Judge took exception to the reference to "RSS".

"Why are you taking names of RSS..it could also be inciting", she commented.

Pracha then showed some tweets where he had appealed for peaceful protests. He affirmed that he had not called for any violence. "He was only serving tea at protest site", Pracha said.

The Judge replied that if any violence happens during protests, the one who called for the protest will be held liable. To this, the counsel replied that the protests had happened after the dharna by Azad had ended.

During the course of hearing, Judge Lau also remarked that there was a "trend" these days to resort to protest before dialogue.

"There should be no inconvenience to people. A lot of people have approached courts saying they are suffering due to protests. People should not suffer..and in the long run you will be held up. You cannot inconvenience people by going out in lakhs and lakhs", Judge Lau commented.

He was arrested by Daryaganj police on December 21, 2019 for allegedly inciting violence during anti-CAA protests. After several persons were detained by police on December 20 night following outbreak of violence in Daryaganj, Azad announced in Twitter that he was surrendering before police in exchange of release of the detainees.