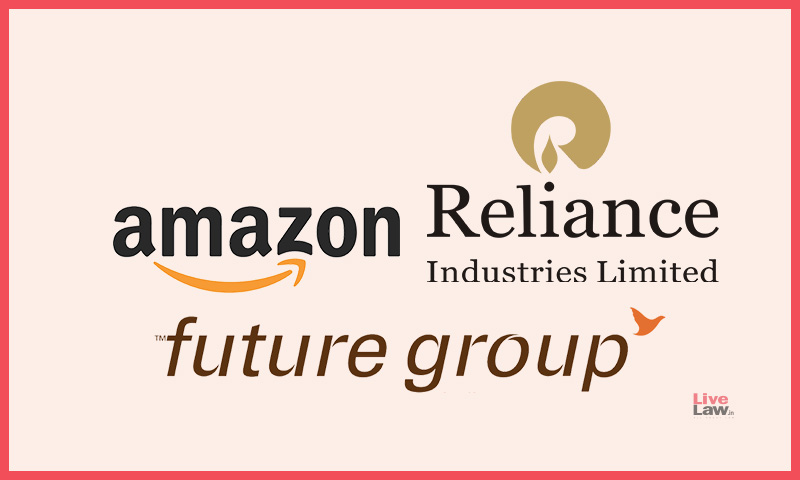 Future Retail Ltd(FRL) suffered a set back on Monday as the Delhi High Court refused to allow its plea for interim injunction to restrain Amazon Inc from writing to Indian statutory authorities objecting to FRL's proposed asset sale to Reliance group.A single bench of Justice Mukta Gupta refused to grant any interim reliefs on FRL's plea it to direct Amazon not to write to statutory...

Future Retail Ltd(FRL) suffered a set back on Monday as the Delhi High Court refused to allow its plea for interim injunction to restrain Amazon Inc from writing to Indian statutory authorities objecting to FRL's proposed asset sale to Reliance group.

A single bench of Justice Mukta Gupta refused to grant any interim reliefs on FRL's plea it to direct Amazon not to write to statutory authorities informing them about an award by a Singapore based Emergency Arbitrator.

However, the court held as "not void" Future Retail Ltd's (FRL) board resolution approving Reliance Industries Ltd's (RIL) deal worth nearly Rs.24,000 crore and said that the statutory authorities would decide approval on the deal as per law. However, .

The court was hearing FRL's plea to restarin Amazon Inc from seeking to stall the FRL deal with Reliance group by writing to various authorities including the Competition Commission of India, Securities Exchange Board of India, etc about an Emergency Arbitrator award which was passed by an arbitral tribunal in Singapore in Amazon's favor.

The court held that the Emergency Arbitrator was not quorum judice but has held the award to be valid. On the question of Amazon seeking conflation of agreements of FRL shareholder agreement and Amazon-Future Coupons Ltd shareholder agreements, the court has held that such conflation is contrary to FEMA. Justice Mukta Gupta pronounced the Judgment in the case relates to a deal between Reliance-Future Retail under which, Future Retail was to sell its retail, wholesale, logistics and warehousing units to Reliance Retail and Fashion Lifestyle Ltd – a wholly owned subsidiary of Reliance Retail Ventures Ltd.

The operative portion of the order reads as follows :

"The trinity of the principles for grant of interim injunction i.e. prima facie case, irreparable loss and balance of convenience are required to be tested in terms of principles as noted above. Since this Court has held that prima facie the representation of Amazon based on the plea that the resolution dated 29thAugust, 2020 of FRL is void and that on conflation of the FCPL SHA and FRL SHA,the 'control' that issought to be asserted by Amazon on FRL is not permitted under the FEMA FDI Rules, without the governmental approvals,this Court finds that FRL has made out a prima facie case in its favour for grant of interim injunction. However, the main tests in the present case are in respect of "balance of convenience" and "irreparable loss". Even if a prima facie case is made out by FRL,the balance of convenience lies both in favour of FRL and Amazon.

If the case of FRL is that the representation by Amazon to the statutory authorities /regulators is based on illegal premise, Amazon has also based its representation on the alleged breach of FCPL SHA and FRL SHA, as also the directions in the EA order. Hence it cannot be said that the balance of convenience lies in favour of FRL and not in favour of Amazon.

It would be a matter of trial after parties have led their evidence or if decided by any other competent forum to determine whether the representation of Amazon that the transaction between FRL and Reliance being in breach of the FCPL SHA and FRL SHA would outweigh the plea of FRL in the present suit. Further in case Amazon is not permitted to represent its case before the statutory authorities/Regulators, it will suffer an irreparable loss as Amazon also claims to have created preemptive rights in its favour in case the Indian law permitted in future. Further there may not be irreparable loss to FRL for the reason even if Amazon makes a representation based on incorrect facts thereby using unlawful means, it will be for the statutory authorities/Regulators to apply their mind to the facts and legal issues therein and come to the right conclusion. There is yet another aspect as to why no interim injunction can be granted in the present application for the reason both FRL and Amazon have already made their representations and counter representations to the statutory authorities/regulators and now it is for the Statutory Authorities/Regulators to take a decision thereon. Therefore, this Court finds that no case for grant of interim injunction is made out in favour of the FRL and against Amazon"

On Amazon's challenge to the deal before an Emergency Arbitrator appointed under the Singapore International Arbitral Tribunal Rules, an injunction was awarded on the deal by the Emergency Arbitrator earlier.
Future Retail claimed before the Delhi High Court that Amazon had written to regulatory authorities including the Competition Commission of India, SEBI, etc mentioning that this order by the Emergency Arbitrator is 'binding' and was thereby trying to hinder approvals to the Future-Reliance deal.
Future Retail also submitted that it did not accept the order by the Emergency Arbitrator as binding at all in the first place and therefore there was no question of challenging it. FRL further submitted that Amazon was "content" with the arrangement with Future Coupons Pvt Ltd as it had a call option in the agreement, which Future Retail claimed would allow Amazon into the multi-brand retail sector if the Government of India at some point allowed FDI in the sector.
FRL's main case was that Amazon was not a party to its agreement with its own shareholders, and Amazon was not its shareholder – it was merely a shareholder of FCPL, and therefore, it could not deny FRL's right to enter into an agreement with Reliance.
FRL was represented in the matter by Sr. Adv. Harish Salve.
FCPL, on the other hand, was represented by Sr. Adv. Mukul Rohatgi, who pleaded that the arbitration was illegal as Indian arbitration law was to apply to the case and any injunctive relief could be obtained under Section 17 of the Arbitration Act only. He agreed with FRL that the award was not binding or valid in the first place.
He prayed that the court would ignore Emergency Award while deciding on the question whether Amazon had the right to tinker with the FCPL-FRL amalgamation at all, and submitted that it would deal with Amazon, on the question of Amazon not exercising its call option when the company was sinking, later in an appropriate arbitration.
He had concluded stating, "As of today, Amazon has no right to invest in FRL and if they can't invest they have no right to stop Reliance from investing in us."
Sr. Adv. Abhishek Singhvi appearing for Reliance Retail and Reliance Retail & Fashion Lifestyle Ltd submitted that the award of the Emergency Arbitrator was a foreign concept for India, and found no place in Indian law. Further, that Emergency Arbitrator was consciously not included under the Arbitration Act despite the 246th Law Commission Report's recommendation, and therefore this award passed by an Emergency Arbitrator could not be binding at all.
Amazon, represented by Sr. Adv. Gopal Subramanium, argued that most, if not all the arguments presented by FRL, FCPL and Reliance had already been dealt with by the Emergency Arbitrator. He also submitted that Amazon had not in the least contradicted or intended to violate any FDI policy of India's as, FCPL being an Indian entity, money coming into FRL from FCPL would not be considered as FDI at all.
He had further pointed out that since Amazon had 49% stake in FCPL, which has 9.82% shares in FRL, Amazon's stake in FRL becomes half effectively and would not cross the 10% limit imposed by India's FDI policy in multi-brand retail sector.
He also argued that all FCPL and FRL's Shareholder Agreements under the common umbrella of the Biyanis had already been brought to the notice of the CCI. Against the Law Commission recommendation argument he responded that, Justice Nariman had already noted in a judgment by the Supreme Court that "recommendations by a Law Commission Report need not detain the court from interpreting the words as they are susceptible to being interpreted."
Click Here to download Delhi High Court Order in Future Retails Vs Amazon