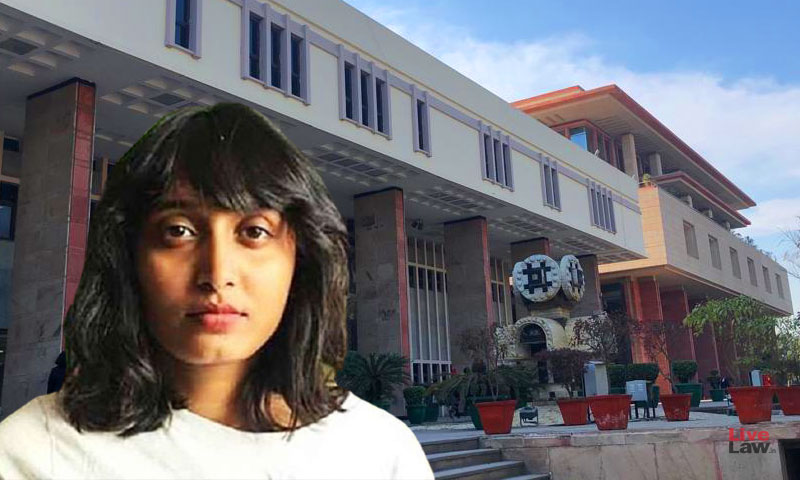 The Delhi High Court on Thursday issued notice on a plea filed by Activist Disha Ravi seeking to restrain Delhi Police from leaking any investigation material relating to the FIR filed against her in connection with the Toolkit case.The High Court directed the Delhi Police to file a counter affidavit in the matter by tomorrow morning and also took on record Solicitor General Tushar...

The Delhi High Court on Thursday issued notice on a plea filed by Activist Disha Ravi seeking to restrain Delhi Police from leaking any investigation material relating to the FIR filed against her in connection with the Toolkit case.

The High Court directed the Delhi Police to file a counter affidavit in the matter by tomorrow morning and also took on record Solicitor General Tushar Mehta's statement on behalf of Delhi Police that nothing has been leaked from their end.

"There has been no leakage from our side, we can also file an affidavit. Nothing is being shared. This is a call for media attention," the SG told the Bench.

Senior Advocate Amit Sibal appearing for Ravi insisted that it is the Delhi Police which leaked confidential information of the criminal case to the media.

"They can say whatever, but the facts speak otherwise. She was arrested on 13th, and material was seized by police… Media itself says that they have got records from police, how are they accessing these records?" Sibal submitted.

"This is a most unfortunate case where the media, in order to gain a few thousand TRPs, is trampling over the rights of the citizens.

A 22 year old has been arrested, and it's being called a call for media attention?"

In her plea, Ravi had also sought action against India Today, Times Now and News 18 for violative reporting in the Toolkit Case by allegedly running "one-sided" reports. The High Court has issued notice to NBSA, TimesNow and News18. India Today was represented in the Court.

Claiming that media houses, including Times Now, India Today and News 18 have published "one-sided defamatory, suggestive innuendos, and half-truths" about her in the Toolkit case, 22-year-old environment activist Disha Ravi who was arrested and sent for 5 days remand on allegations of involvement in the case earlier today had moved the Delhi High Court seeking to restrain Delhi Police from leaking any investigation material relating to the case filed against her by the PS Special Cell, including alleged contents of private chats/communication by her to any third party, including the media.

The plea filed by Ravi sought directions to the Ministry of Information and Broadcasting seeking to take appropriate action against Times Now, India Today and News 18, and all other satellite TV channels allegedly reporting on the case in a manner which infringes Ravi's right to privacy, and is "grossly violative of her right to a fair trial and presumption of innocence."
Ravi submitted that the illegal actions and omissions on part of the news channels has irrevocably violated her fundamental right to privacy, her right to reputation, her dignity, and the consequent effect of the administration of justice and right to fair trial – all guaranteed under Article 21 of the Constitution.
She had therefore moved court seeking directions to restrain the channels from publishing such "visceral" content, including extracts of any alleged private chats (including WhatsApp chats) between her and third parties.
Ravi's writ petition specifically alleges that the Delhi State government, acting through the Station House Officer, Special Cell (SB), Delhi Police, "leaked investigative material" by way of her alleged "WhatsApp chats, the substance and details of which were only in the possession of the Investigating Agency." The petition states that the 22-year old's mobile phone and laptop were seized by the police on Feb 13 at around 11 am, after which the same have not been accessed by her at all. As such, only the police had access to the contents of Ravi's private conversations and "any leaks of the same necessarily constitutes the commission of a cognizable offence and is a violation of her dignity, reputation, and fundamental right to privacy, guaranteed under Article 21 of the Constitution."
Referring to the leakage of Whatsapp chats between Disha Ravi and Swedish activist Greta Thunberg, the petition states that the further publication and dissemination of the private alleged WhatsApp chats by various media houses, including Times Now, News 18 and India Today, "is a clear violation of the provisions of the Cable Sections the Cable Televisions Networks (Regulation) Act, 1995 (CTN Act), the Programme Code and the Uplinking and Downlinking Guidelines."
Infact, the petition alleged that India Today had gone so far as to brazenly publicise that "India Today TV has accessed WhatsApp chats between Greta Thunberg and Disha Ravi" after the Swedish climate activist uploaded the original toolkit in support of the ongoing farmer protests but deleted it later, saying it was 'outdated". The channel then went on to showcase excerpts titled "WhatsApp Chat between Greta Thunberg, Disha Ravi".
Calling out the Delhi Police for tweets from the official handle of the department on Twitter, wherein it was stated that Ravi was a "key conspirator in the document (toolkit's) formulation & dissemination. She started WhatsApp Group & collaborated to make the Toolkit doc. She worked closely with them to draft the Doc"; and that she had "collaborated with pro Khalistani Poetic Justice Foundation to spread disaffection against the Indian State", the writ states that such tweets constitute an opinionated and judgmental statement and significantly impinge on the accused person's right to privacy and fair trial, and are in violation of the Ministry of Home Affairs Office Memorandum dated 01.04.2010, issuing an "Advisory on Media Policy of Police", as they outrightly prejudge Ravi's guilt and "disclose confidential and prejudicial information about the status of investigation."