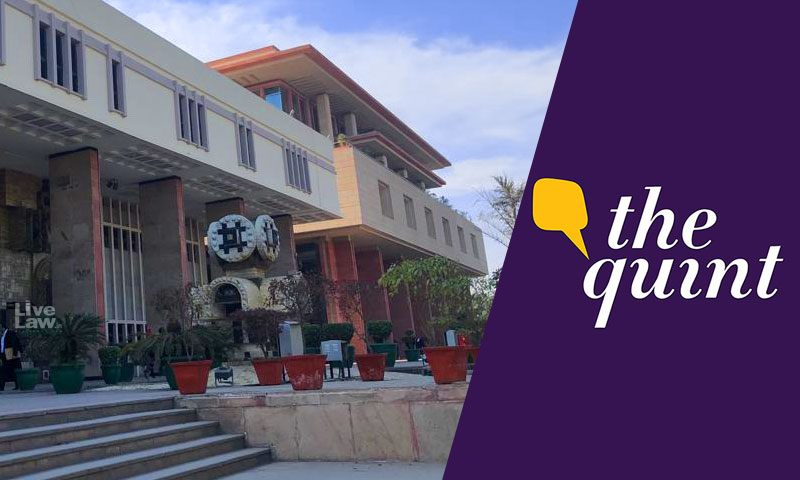 The Delhi High Court on Friday issued notice on a petition filed by Quint Digital Media Ltd, which owns the online news portal 'The Quint', challenging the constitutional validity of the Information Technology (Guidelines For Intermediaries And Digital Media Ethics Code) Rules, 2021, to the extent it regulates the publishers of news and current affairs content.A division bench comprising...

The Delhi High Court on Friday issued notice on a petition filed by Quint Digital Media Ltd, which owns the online news portal 'The Quint', challenging the constitutional validity of the Information Technology (Guidelines For Intermediaries And Digital Media Ethics Code) Rules, 2021, to the extent it regulates the publishers of news and current affairs content.

A division bench comprising Chief Justice DN Patel and Justice Jasmeet Singh issued notice on the petition and tagged it along with an earlier petition filed by the publisher of 'The Wire' against the same rules. The bench has sought for the reply of the Union Government on the plea by the next date of hearing, April 16.

Ritu Kapur, the Director and Co-Founder of 'The Quint', is also a petitioner in the case.

Though Senior Advocate Nitya Ramakrishnan sought for interim protection for the petitioners from coercive steps under Part 3 of the Rules(which deals with digital media), the bench said that it will not grant it as of now. However the bench expressed that in case any coercive steps are taken, the petitioners will be at liberty to seek an urgent hearing.

The petition, filed through Advocate Prasanna S and Vinoothna Vinjam, contends that the new Rules are ultra vires the Constitution of India as well as the Information Technology Act to the extent they impose unreasonable and arbitrary restrictions on digital news media. It is highlighted that the parent statute of the Rules, the IT Act, does not deal with digital media, and hence, the executive rules made under the said Act to regulate online news publishers are invalid.

The Rules amount to an "overreach" as they incorporate the vague and arbitrary norms under the Press Council Act and the Programme Code, that too by way of subordinate legislation, in order to vest "draconian powers and control" with the executive, contends the petition.

"The regulations are frontally offensive to Article 19(1)(a) and Article 14. A restriction on the Fundamental Right to free speech andexpression can only be to the extent strictly necessary for the stated interests in Article 19(2). Digital news portals such as the Quint, published by the Petitioners, are already subject to all the civil and criminal laws enacted for those interests. Therefore, the IT Rules, 2021 cannot be in the interest of Article 19(2). They are only meant to be a ruse for the State to enter and directly control the content of digital news portals",  the plea states.

"The IT Rules, 2021 are manifestly unjust", the petition says, "as they create a parallel and extra-legal adjudicatory mechanism, which has at its apex, the Central Government. This also violates the principle of separation of powers".

Last week, the Kerala High Court had issued notice to the Centre on a petition filed by LiveLaw challenging the new IT Rules. The High Court also passed an interim order restraining coercive action under Part 3 of the Rules against LiveLaw, its Chief Editor MA Rashid and Managing Editor Manu Sebastian, saying that they were publishers of law reports and legal literature.