"You Think Everything Will Be Served At Your Doorsteps": Delhi High Court Pulls Up Delhi Govt For Not Arranging Tankers To Collect Oxygen 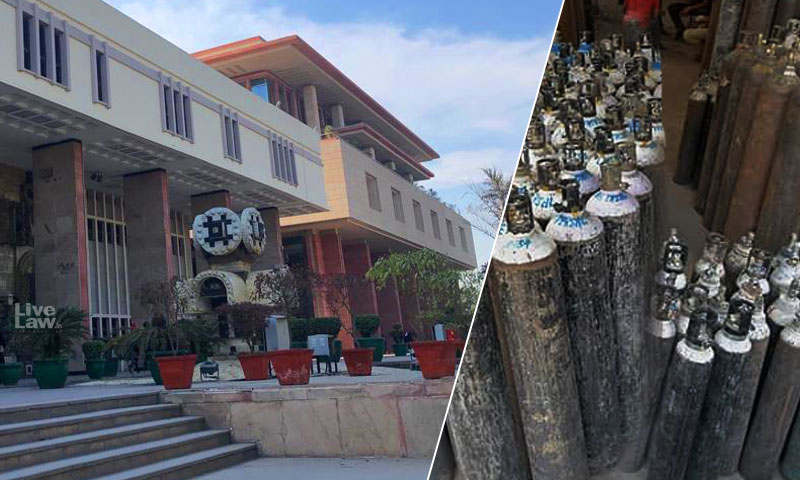 The Delhi High Court on Saturday asked the Delhi Government to take systematic steps for procuring cryogenic tanks for Oxygen supply and make adequate security arrangements for their movement to various Covid-19 hospitals in the city.

The direction was made by a Division Bench comprising of Justice Vipin Sanghi and Justice Rekha Palli while hearing a petition filed by Maharaja Agrasen Hospital, citing oxygen shortage.

Noting that the oxygen supply has primarily been affected due to non-arrangement of cryogenic tanks by the Delhi Government, the Bench asked the Centre to consider assisting the State in arranging the same for seamless supply of Oxygen within the city.

"Citizens can't be allowed to die like this…In case cryogenic tanks are less in supply, we are hopeful that centre may work this out in coordination with GNCTD, who cannot leave it completely on the Centre," the Bench ordered.

During the hearing, the Centre and the Delhi Government were at loggerheads with respect to supply of Oxygen amid shortage of cryogenic tankers for transporting.

Whereas Centre insisted that Delhi must arrange its own tanks like all the other States, the Delhi Government submitted that Delhi is not an industrial state and therefore has no cryogenic tanks.

"If Delhi govt having an issue with tankers, they have to talk to suppliers directly. That's what every state is doing," SG Mehta insisted.

The Division Bench also pulled up the Delhi Government for not arranging their own cryogenic tankers for Oxygen supply, after allocation from the Centre.

"The problem is you think allocation is done so everything will be served at your doorstep but that's not how it works. After allocation have you made any effort for the tankers to collect the oxygen?

Every state is arranging its own tankers, if you're not having your own tanks, arrange them. You will have to do it, get in touch with the Central govt officers. We are not here to facilitate contact between officers," the Bench sternly remarked.

Dr. Ashish Verma, appearing for the Delhi Government told the Bench that they are taking all possible steps for procuring Tankers however, the city is short on even nitrogen and argan tankers as it is not an industrial city.

"If allocation was done 3 days back, why didn't you exercise your option to look for tankers? Your political head has himself been an administrative officer, he knows how it works."

The Hospital Maharaja Agrasen, represented by Advocate Alok Kr Aggarwal claimed that it has 306 patients, almost 100 critical. However, it is facing Oxygen shortage due to which, they are forced to discharge patients. He submitted that the Delhi Government had come to their aid but the supply is not sufficient to cater to so many patients.

During the hearing, another hospital sought to intervene and submitted that 25 lives were lost last night as the Delhi Government did not respond to their demand for Oxygen.

Advocate Sachin Datta appearing for the intervening hospital complained that the officers of Delhi Government are unavailable at the ground level.

"Patients are dying, Mr. Mehra needs to put his house in order… Mr. Mehra, there is complete apathy of your officers on ground," Datta complained.

At this juncture, Senior Advocate Rahul Mehra appearing for the Delhi Government vented that the Centre has not fulfilled its promise to provide 480 MT Oxygen.

"Yesterday instead of the supply increasing to 480 MT as allocated, we received 292 MT. 100 MT have fallen short…Some hospital contacts us for 10 MT, we are able to give only 1 MT, how will the hospitals function? I'm not being alarmist or sensationalist but if nothing put in place now, a situation will arise, lot of lives will be lost," Mehra told the Bench.

During the hearing, ASG Chetan Sharma informed the Court that every sinew in the system is being stretched to meet the rising demand for medical Oxygen however, they are facing logistical issues in meeting the gap.

On an inquiry made by the Court as to how the Government is distributing the resource, Nodal Officer for Centre, Piyush Goyal informed that the entire supply-chain is being re-worked.

"It's the first time that trains are doing something like this [transporting Oxygen supplies]. For the first time in history, tankers have been flown in by an Air Force plane. The Centre facilitated it," Goyal told the Bench.