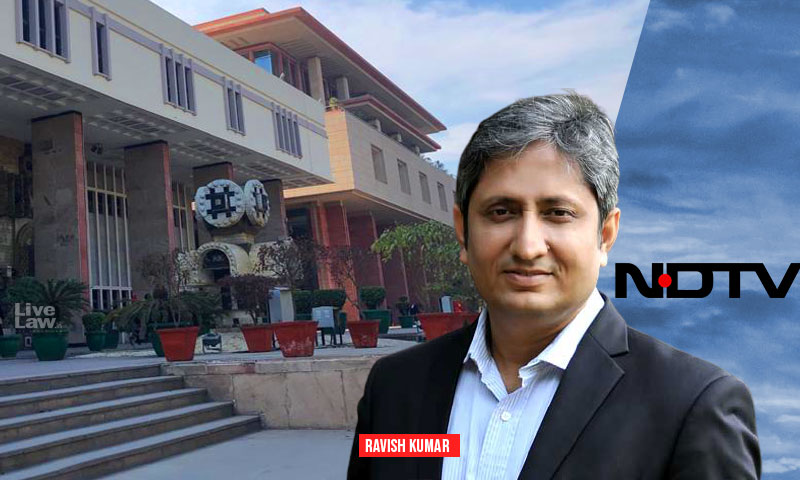 x
The Court observed that there was no evidence whatsoever, whether direct,circumstantial or forensic, against the accused.

A video shown by journalist Ravish Kumar during a prime time show in NDTV news channel came to the rescue of three persons who were jailed in a Delhi riots case.The Delhi High Court relied on the Ravish Kumar's video while observing that "there is no evidence whatsoever, either direct or circumstantial or forensic", against three persons - Junaid, Chand Mohammed and Irshad- who...

A video shown by journalist Ravish Kumar during a prime time show in NDTV news channel came to the rescue of three persons who were jailed in a Delhi riots case.

The Delhi High Court relied on the Ravish Kumar's video while observing that "there is no evidence whatsoever, either direct or circumstantial or forensic", against three persons - Junaid, Chand Mohammed and Irshad- who were accused of killing one Shahid during the Delhi riots of February 2020. The petitioners were under custody since April 1, 2020.

According to the police case, the accused were part of the Muslim group which had taken place at the rooftop of Saptarishi Building at Chand Bagh area of North East Delhi, to attack Hindu groups standing at the rooftops of other buildings through firing and stone-pelting. It was further alleged that in that process, Shahid, who was also present at the top of Saptarishi building, got killed as a result of a gunshot.

The prosecution, in the chargesheet filed against the accused, had referred to the NDTV video. While arguing for bail, the petitioners' lawyer Advocate Salim Malik pointed out that the 3 accused persons are not seen in the NDTV video, which the prosecution itself has relied upon. The lawyer played the NDTV video during the arguments and showed that the faces of the persons involved in rioting are visible when it is enlarged; however, the none of the petitioners were seen in it.

A single bench of Justice Suresh Kumar Kait, after analyzing the nature of gunshot wound in Shahid's body, observed that it was a long distance shot and not a close-range shot.

In this connection, the bench referred to the NDTV video which showed that there was gun firing from the rooftop of Mohan Nursing Home building, which was opposite Saptarishi building. From the nature of entry and exit wounds, and also from an analysis of the video, the bench observed that firing was possibly caused by a long range shot from Mohan Nursing Home. Also, since the trajectory of the bullet wound was downwards, the firing must have taken from a height. So, there was possibility of the gun shot originating from Mohan Nursing Home Building, which was having more height than the Saptarishi building.

"It is pertinent to mention here that in the post-mortem report, the direction of the wound in which it has entered the body has been given to be from the left side which is going downwards and exiting from the right side. Which means that the injury was from a height and at a distant range, thus, establishes the possibility that the bullet came from Mohan Nursing home or any building which is on the left side of the Saptarishi building and is at height which is on the front and diagonally left to the Saptarishi building and is on more height than that of Saptarishi building", Justice Kait observed.

The bench further observed that if the bullet was fired from a close range, then it would have gone straight, rather than entering the body from left side and exiting from right side and that too downwards. Further, in case of close range shot gunshot residues like led, Carbon MonoOxide, Carbon Dioxide are bound to be present t the entry of the wound, but, no such residue was mentioned to be available in the post-mortem report.

The relevant observations from the judgment are as follows :

"As submitted by learned counsel for petitioner that in the same video relied upon by police, at exact after running of video for 10 minutes, it is seen that Ravish Kumar, NDTV primetime anchor saying that a person is firing rifle from Mohan Nursing Home Hospital and is wearing helmet, there is another person who is covering the weapon with handkerchief and later on,they can be seen in the videos as well. But the investigating agency seems to have concentrated only on one side of the building, although it is an admitted case of prosecution that rioters from both the sides were pelting stones at each other and were firing. Further, in this video, the firing is seen to be done only from Mohan Nursing Home and not from Saptarishi building"

The Court also observed that the theory of close-range shot is just a "conjecture of the investigating agency and is not based on scientific fact".

"Simply because copper like pieces were found near the exit wound of the body, as per the post-mortem report, it would not signify a close-range shot. But it was only on this basis, the investigating agency concluded that the "firing was possibly from close proximity", which is not scientifically possible", the Court opined.

The Court also observed that it was hard to believe that the petitioners will kill a person of their own community during riots.

"Neither there was any motive whatsoever either for them or for any other person allegedly present on the roof of Saptarishi building, to commit the offence, nor has the prosecution alleged any motive in the entire case. Thus, it is hard to believe that a communal riot can be used by the petitioners to cause death of the person of their own community", the Court said.

The Court also noted that as per the prosecution case itself, the petitioners had let go off witnesses belonging to Hindu community while entering the Saptarishi building, asking them to leave the building and save their lives. If their actual intention was to indulge in communal rioting, would they have done so, the court wondered.

"Moreover, when it is an admitted case of the prosecution that the petitioners actually let go off the witnesses of the different community and asked them to leave the scene of crime to save their lives,namely,Mukesh, Narayan, Arvind and their families, before climbing on the roof top of Saptarishi building. If,they were really involved in this communal riot and wanted to cause harm to the members of the other community/Hindu community, they would not have tried to save the lives of the above-named members of the other community", the bench observed.

The Court also noted that the police is yet to arrest the main assailant who shot the gunfire which killed Shahid and that no recovery of any firearm of weapon has been made from the petitioners.

The Court ordered the petitioners, who were under custody since April 1, 2020, to be released on bail, after noting that the charges are yet to be framed in the trial, which is likely to take a substantial time.