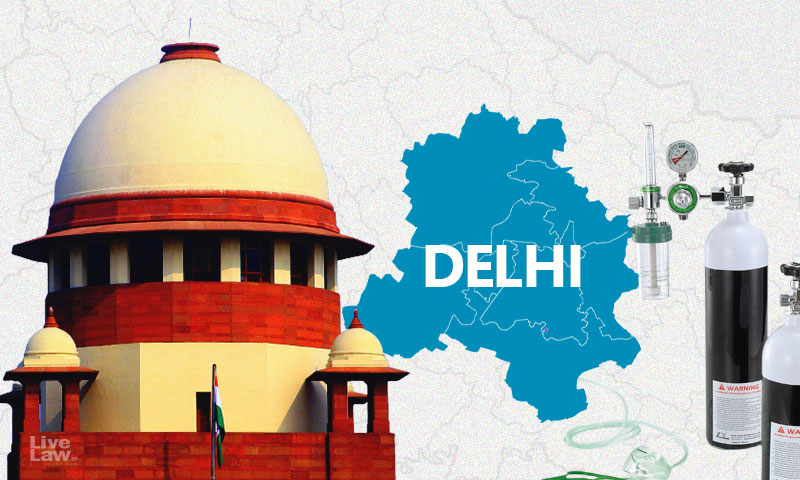 The sub-group constituted by the Supreme Court for oxygen audit of Delhi has opined that "exaggerated claims and wrong formula" were used by the Government of National Capital Territory of Delhi(GNCTD) to project its requirements for Liquid Medical Oxygen during the second wave of the COVID pandemic."It is still not clear on what basis had an allocation of 700MT been sought by Govt of Delhi...

The sub-group constituted by the Supreme Court for oxygen audit of Delhi has opined that "exaggerated claims and wrong formula" were used by the Government of National Capital Territory of Delhi(GNCTD) to project its requirements for Liquid Medical Oxygen during the second wave of the COVID pandemic.

"It is still not clear on what basis had an allocation of 700MT been sought by Govt of Delhi in the Supreme Court of India when collated data had so many gross errors and it took an oxygen audit to point out the same. It also appears that Govt of Delhi used a wrong formula and made exaggerated claims on 30th April. It was also evident that some hospitals could not differentiate between KL and MT and the same was not examined while projecting 700 MT", said the interim-report prepared by the sub-group constituted by the Supreme Court for the oxygen audit of Delhi.

Delhi Home Secretary Bhupinder Bhalla and Max Healthcare director Dr. Sandeep Budhiraja did not attend the final meeting of the sub-group. The Delhi Home Secretary objected to the interim report, saying that the committee was functioning with a "pre-conceived and predetermined conclusion and narrative". Dr.Budhiraja said that the calculation did not take into account the oxygen cylinder refilling and non-COVID requirements of the hospitals.

It may be recalled that the Supreme Court had directed that the daily oxygen allocation for Delhi should be 700 MT. The Delhi High Court had initiated contempt proceedings against the officers of the Central Government for the failure to supply 700 MT oxygen, following the deaths of patients in some Delhi Hospitals, reportedly due to lack of oxygen supply. Though the Supreme Court stayed the Delhi High Court's contempt notice, it asserted that the oxygen supply for Delhi must continue at 700 MT.

"The directions contained in the order of this Court dated 30 April 2021 leave no manner of doubt that the Union Government is under an obligation to ensure a daily supply of 700 MT to meet the existing requirements of the NCTD. This direction has been based on the assurance of the Union Government to the Court", the Supreme Court had said in its order passed on May 6. It was the same order which directed the constitution of a National Task Force and the oxygen audit of States/UTs.

In its April 30 order, the Supreme Court bench led by Justice DY Chandrachud had recorded that the existing allocation of oxygen for GNCTD remained at 490 MT/day, while the projected demand had increased by 133% to 700 MT/day, and that therefore there was a need to remedy the same.

The order had noted that the Centre itself has admitted in its affidavit filed in Supreme Court that the Delhi Government has revised its projected demand for oxygen by 133% from 490 MT per day to 700 MT per day.

The interim-report of the sub-group says that the oxygen requirement calculation sheet shared by the GNCTD has "lot of errors".

"In the 4th meeting on 13th May, it was discussed that there is a gross discrepancy (about 4 times) in that the actual oxygen consumption claimed (1140MT) was about 4 times higher than the versus calculated consumption by formula for bed capacity (289MT)", the report reads.

The figure of 1140 MT came from the responses given by 183 hospitals in the Delhi relating to oxygen consumption.  Although the sub-group had send pro-forma to 260 hospitals, responses were received only from 183 hospitals.

It may be noted that the Union Government's formula follows the assumption that 50 % of the non-ICU hospital beds use oxygen. On the other the hand, the GNCTD formula assumes that all-non ICU oxygenated beds use oxygen. In this context, it may be relevant to recall that the Supreme Court had called for a revision of this formula of forecasting oxygen requirement based on number of hospital beds, observing that there were critical COVID patients who have not secured hospital admissions.

The sub-group opined that the Delhi's oxygen forecast appeared to be exaggerated going by both the Central Government and GNCTD formula. 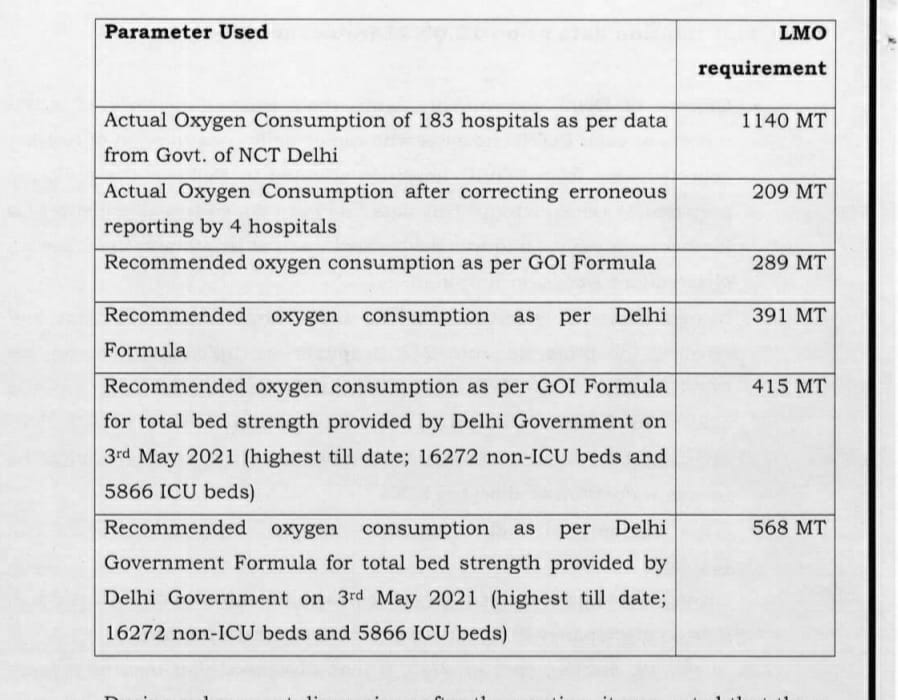 Obvious that there was excess supplies to Delhi

Observing that oxygen tankers were lying idle as they were not able to offload oxygen at hospitals which were completely filled, the report said "it is obvious that there is excess oxygen supply in Delhi".

"It is obvious that there is excess oxygen supply in NCT Delhi, which is further substantiated by the fact that NCT Delhi has picked up only 11MT LMO from Air Liquide plant at Panipat by 11am on 13.05.2021. It was also pointed out that Delhi was unable to store all the LMO allotted to it and had asked the suppliers to hold oxygen in reserve at their own plants.

Tankers in Delhi are not able to offload oxygen and are lying idle as oxygen tanks in various hospitals are completely filled. In this regard, a complaint has been received from M/S Goel Gases that their tanker has been parked at LNJP hospital and could not offload oxygen for many hours, leading to breakdown in supply chain. Similar, instances have been observed at New Delhi", the report said.

In its meeting held on May 13, the sub-group estimated that the then oxygen demand of Delhi ranged between 290-480 MT. On May 15, as a compromise, the sub-group agreed to have an assured allocation of 500 MT for Delhi for the next few days. It was observed that if this quantity was not consumed, the same could be provided to other states. Later, on May 18, the sub-group noted that the average consumption had come down to  approximately 400 MT.

Bhupinder S Bhalla, Principal Secretary (Home) GNCTD, did not attend the committee meeting on May 18 and recorded the objections of Delhi Government to the draft interim report.

He said that the sub-group deviated from the task assigned to it by the Supreme Court, which was to identify the bottlenecks in smooth distribution of oxygen supply to GNCTD. The task of reviewing the oxygen formula was with the National Task Force, and the sub-group transgressed into it, the Secretary said.

On behalf of the Delhi Government, the Home Secretary recorded the following objections :

"The manner in which the proceedings of the Sub-Group have been conducted, suggests that the purpose of proceedings was to justify a pre-conceived and predetermined conclusion and narrative, to recommend a lower quantity of a LMO to Delhi, and to further portray an impression that the assessment by the GNCTD before the Hon'ble High Court of Delhi and the Hon'ble Supreme Court was exaggerated or not genuine. The draft Interim Report is attempting to indicate an assessment of the LMO requirement qua Delhi, which is neither a reflection of its genuine demand or requirements at the various points in time that the discussions were held, especially during the period when, though the cases had peaked, the high requirement of oxygen continued due to consistently high bed occupancy in hospitals.

There is no gainsaying that this kind of exercise does not further the spirit, intent and objective of the order of the Hon'ble Supreme Court whereby the Sub-group was constituted.

In our assessment, these fundamental errors, in the approach of the Sub-Group, goes to the root of the matter and was, therefore, highlighted from time to time during the course of proceedings of the Sub-Group. Unfortunately, the draft Interim Report instead of taking cognizance of the said concerns is proceeding to indicate the quantity of LMO to be allocated to Delhi. This, in our considered view, vitiates the entire exercise conducted by the Sub-Group"

Dr. Budhiraja of Max Healthcare also did not attend that May 18 meeting.