'They Were Actually Helping People; No One Defrauded' : Delhi Police On Hoarding Allegations Against BV Srinivas, Gautam Gambhir Etc 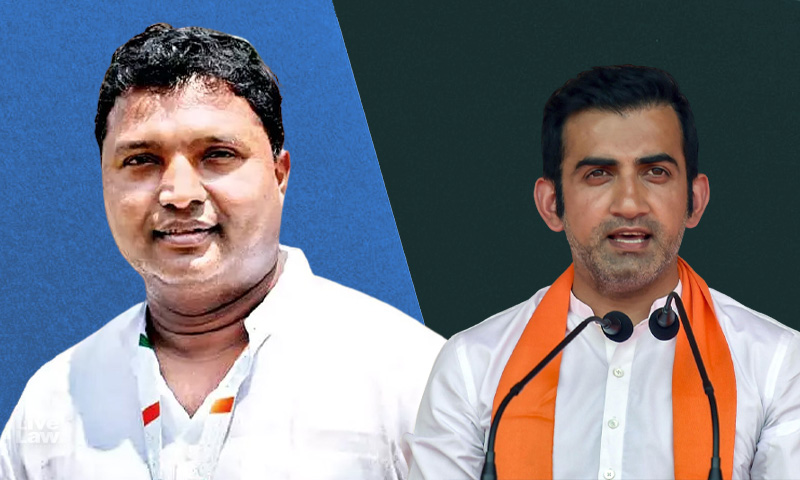 The Delhi Police has found no evidence of hoarding of COVID drugs and relief materials against Congress leader BV Srinivas, BJP MP Gautam Gambhir and 7 other politicians in its preliminary investigation held so far.

In the status report filed before the Delhi High Court, the Delhi Police has said that these persons were actually helping people in getting medical aid.

The police has said that the enquiry conducted so far revealed that relief in the form of medicines, plasma, oxygen cylinders, hospital beds etc., were given without charging any money and no one was defrauded.

"The distribution/help has been voluntary and without discrimination", the status report said.

On May 4, the High Court had directed the police to respond to the allegations raised in a writ petition filed by one Dr.Deepak Singh that politicians were hoarding COVID relief materials and were distributing them without authorization.

"That the enquiry conducted so far has revealed that all the persons alleged to have been hoarding medicine etc, have been actually helping people in getting medical aid in form of medicine, oxygen, plasma or hospital bed, the person enquired into have not charged any money for the help provided, and thus no one has been defrauded. The distribution/help has been voluntary and without discrimination", the status report field by Manoj Dixit, ACP, Delhi Police Crime Branch said.

The police has requested the Court to grant 6 more weeks time to finalize the enquiry.

The reports about the questioning of Srinivas on Saturday had created a social media storm with many users accusing the police of harassing those who were helping people during the time of pandemic.

In his statement to Police, Srinivas said :

"The entire relief work is being carried out pro bono, to provide succor and relief to poor, needy, and desperate patients and their families who seek help during the pandemic. It is unfortunate that at a time when the Central Government has left the citizens of the country to fend for themselves, the resources available are being squandered to harass citizens who are doing charity work to alleviate the pain and suffering caused to the people of this country".

The Youth Congress leader said he, along with other volunteers, connect people in need with the appropriate resources and they "receive oxygen equipment as donations and provide it free of cost to the people."

With respect to beds and plasma, Srinivas said that his team of volunteers is working constantly to identify and confirm availability of beds and plasma, and to create a database where possible. Volunteers in his team are constantly in touch with hospitals / COVID Care Centres, and plasma donation banks and donors, to check for availability and connect the person in need to the resource.

BJP MP and ex-cricketer Gautam Gambhir, who had come under scanner for distribution of Fabiflu medicine strips in his constituency, told the police that the drugs were purchased from authorized vendors by the Gautam Gambhir Foundation - in which he is a trustee - and they were distributed in a free medical camp held between April 22 to May 7. He said that the camp was held under the supervision of Dr Manish of Garg Hospital and that the medicines were given free of cost against prescriptions. He further stated that being a public representative, it was his duty to extend support to people in whatever means possible at a time of crisis.

Former Rajya Sabha MP Shahid Siddiqui, who was questioned on how he got two remdesivir injection vials from Congress general secretary Priyanka Gandhi, told police that he was given the two doses of the medicines, which were procured for Congress leader Rahul Gandhi but were not used.