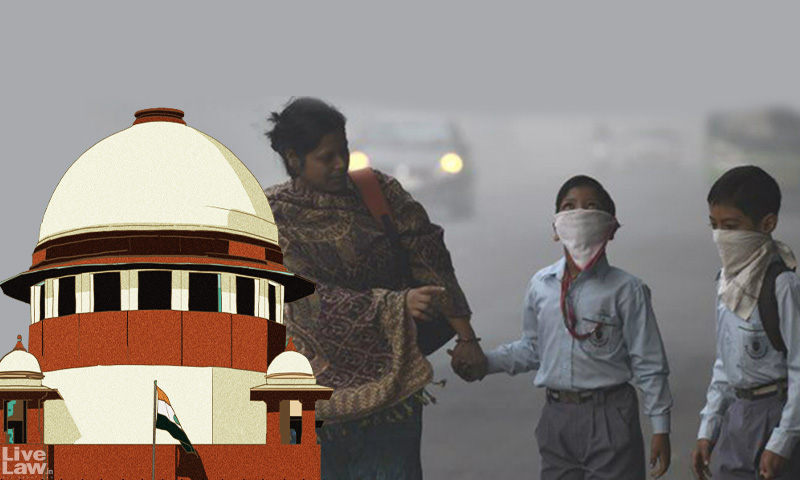 Taking note of the air quality crisis in the national capital, the Supreme Court has re-imposed the ban on construction activities in Delhi-NCR until further orders. The Commission for Air Quality Management in Delhi-NCR had earlier decided to lift the ban with effect from November 22, taking note of the slight improvement in the air quality.However, a bench comprising Chief Justice of India...

"...as an interim measure, and until further orders, we re-impose the ban on the construction activities in the NCR subject to the following two conditions:-

(i) Non-polluting activities relating to construction such as the plumbing work, interior decoration, electrical work and carpentry are allowed to be continued;

(ii)The States shall use the funds which have been collected as labour cess for the welfare of construction workers to provide them subsistence for the period during which construction activities are prohibited and pay wages notified under the Minimum Wages Act for the respective categories of workers".

The Court also directed the Central Government, Delhi-NCR States and the Commission are  to take appropriate steps to deal with the situation.

The Court passed the order in the writ petition Aditya Dubey(Minor) and another versus Union of India, which is filed seeking urgent steps to improve the air quality of Delhi-NCR.

Taking up the case in November second week when the air quality in Delhi-NCR had plummeted to severe grade, the Court had asked the Central Government and NCR steps to take emergency measures.

Commission must take steps in advance based on scientific model

"We direct that instead of waiting for the air quality to deteriorate before initiating action under the graded response plan, necessary measures must be put into place in anticipation of a deterioration of air quality. For this purpose, it is necessary for the Commission to engage expert agencies with domain knowledge in meteorological data and statistical modelling.

The Commission must commission a scientific study of air quality based on available data of previous years bearing upon recorded levels of air pollution. The study must factor in seasonal variations and other relevant parameters. Once a scientific model is available, which factors in wind velocity as well as natural and man-made phenomena, the graded response plan can be modulated to provide for measures being taken in advance, based on anticipated changes in air quality without waiting for the air quality to deteriorate.

On this basis steps can be planned at least a week in advance and even earlier, based on anticipated levels of air pollution in the foreseeable future. The Commission shall carry out the above exercise within a month and report the steps taken for compliance with this direction".