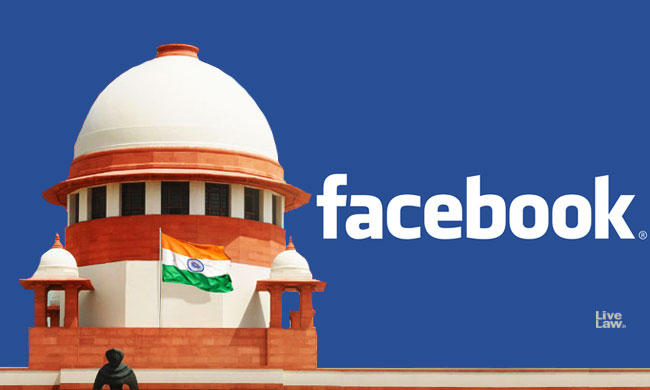 A bench comprising Justices SK Kaul, Aniruddha Bose and Krishna Murari issued the notice after hearing Senior Advocates Harish Salve (for Mohan), Mukul Rohatgi (for Facebook) and Sr Adv Dr AM Singvhi (for the Chairman of the panel, Raghav Chadha).

The bench also recorded the submission of Singhvi that the meeting scheduled for today has been deferred in view of the hearing and that there will be no further proceedings on the notice till the matter is finally disposed.

The Court will next consider the matter on Oct 15.

Salve, appearing for Facebook VP, submitted that to coerce a private citizen to appear before the assembly panel with a threat of penalty is a violation of fundamental rights.

Right to speech under Article 19(1)(a) also includes right not to speak, he submitted.

He further argued that the Committee lacked the legislative power to make such an enquiry. In this regard, he referred to Article 239AA(3)(a) of the Constitution and said that police and law & order are outside the domain of Delhi assembly.

Mukul Rohatgi, appearing for Facebook, submitted that legislature cannot act like a court of justice. The panel is already predetermined that Facebook colluded in Delhi riots. They have no authority of law to process  an enquiry of this nature, he said.

Singhvi, appearing for the Chairman of the Panel, submitted that Mohan was called as a witness and no coercive action was intended. He added that Facebook is not regarded as an accused. There are reports of Facebook being misused to incite communal violence and the panel did not allege any direct complicity by Facebook. The panel wants to discuss ways to fix the problem, he added.

Mohan has stated that the issue falls within the exclusive domain of the Union of India.

The petitioner has clarified that although he does not seek judicial review of a State Legislature's right to merely discuss issues outside of its legislative competence, so long as it does not seek to exercise power over non-members, however, "when an enquiry into a subject matter over which the Legislature lacks jurisdiction extends beyond its members – whether by summoning non-members at the threat of sanctions for refusing to appear, or by directing agencies to take actions against those non-members – the matter is amenable to judicial review. Petitioners submit that those precise circumstances are present here and require this Hon'ble Court's intervention".

It is averred that the Committee improperly seeks to exercise its powers and privileges in a manner that exceeds the constitutional limits of the Legislative Assembly.

Mohan states that the Committee has summoned him and threatened to hold him in breach of the Committee's privileges if he does not appear and give testimony. In this context, he submits that there is no law that empowers a State Legislature, including a committee formed by that Legislature, to take coercive action against any person unless it obstructs or impedes its legislative functions. "The rights and liberties of persons are protected by Part III of the Constitution, particularly Articles 14, 19 and 21, and coercive action cannot be taken against any citizen unless that action has been authorised by law," the petition reads.

Further, on the aspect of impinging upon the exclusive jurisdiction of the Union of India in this regard, the plea states that Committee is seeking to make a "determination of the veracity of allegations levelled against Facebook" in the Delhi riots, which intrudes into subjects exclusively allocated to the Union of India.

"Regulation of Intermediaries, including in connection with the Facebook service, falls within the exclusive domain of the Union of India under Entry "communication" in the Union List (Entry 31 of List I of the Seventh Schedule). Parliament, in exercise of these powers, enacted the Information Technology Act, 2000 to regulate intermediaries. Any assessment of the veracity of allegations against Petitioner No. 3 as an intermediary is exclusively a Union subject" - Excerpt of Plea

The petitioner formulates the following questions for consideration of the Court:-

1) Whether the privileges of Respondent No. 1, the Legislative Assembly of the NCT of Delhi, include the power to compel the appearance of non-members before Respondent No. 1 to express their views or subject them to examination?

3) If the answer to question two is in the affirmative, whether the privileges of a State Legislature can be applied in a manner that would violate Part III of the Constitution?

5) Whether a Committee of the State Legislature can compel witnesses to testify on the issue of "communication", which is within the exclusive jurisdiction of the Union of India (Entry 31 of List I of Seventh Schedule of the Constitution of India)?