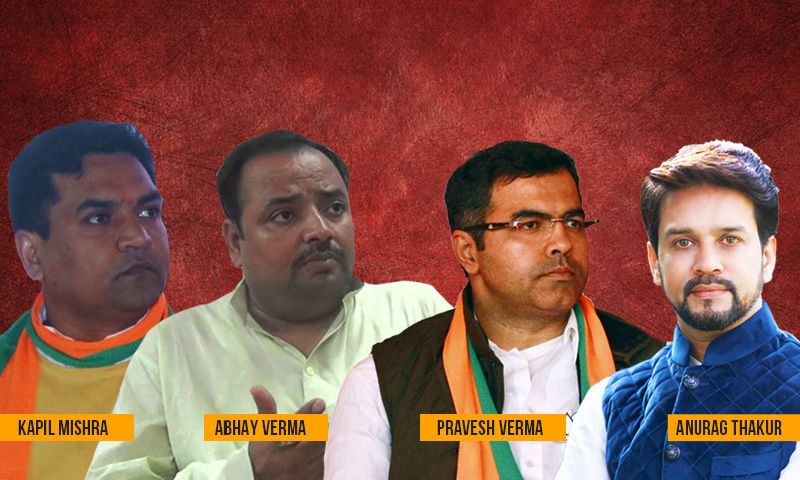 The Supreme Court on Friday asked the Delhi High Court to decide expeditiously, preferably within three months, a writ petition seeking registration of FIR and investigation against  BJP leaders Kapil Mishra, Anurag Thakur, Parvesh Verma and Abhay Verma who allegedly made hateful comments to incite the Delhi riots of 2020.

A bench comprising Justice L Nageswara Rao and Justice BR Gavai passed the direction in a writ petition filed by three victims of Delhi riots complaining that the Delhi High Court was not hearing their case(Case : Mohd. Nazim and others vs Union of India and others W.P.(Crl.) No. 448 / 2021).

The petitioners also sought the constitution of an independent Special Investigation Team with officers from outside Delhi to investigate the riots cases, compensation for the victims and preservation of CCTV footages and evidence of violence.

Senior Advocate Dr.Colin Gonsalves, appearing for the petitioners, submitted that they are "losing hope" as the High Court was delaying the proceedings, despite an earlier direction by the Supreme Court to decide the matters in a time-bound manner.

Dr.Gonsalves pointed out in March 2020, the Supreme Court had asked the Delhi High Court to decide the matter as soon as possible. The High Court said that the matter will be heard after the hearing in the petitions seeking probe into the alleged police atrocities in Jamia Milia Islamia campus in December 2019 during the anti-CAA protests. However, even the Jamia matter is not progressing, Gonsalves submitted, and the petitioners' case has also got stagnated.

The petitioners stated in the petition that theirs was a "simple and straightforward" case for registration of FIRs based on video evidence of speeches already in the public domain, and the delay in deciding the cases was wholly unjustifiable. Even the Jamia Violence matter is not decided despite several days of hearing, the petitioners stated.

"Your lordship sent us back to High Court 1 year 10 months ago. An order was made that we will start after Jamia matter is over. Jamia matter, we appeared, petitioners were heard. It went on for a year. Then ASG starts, 5-6 days then he comes to the fag end. And then after one and a half years after the argument, an order is made in Jamia to release the matter from "Part heard". After 2 years Jamia matter is just starting. We are losing hope. Then your lordship said expedite. Today even day 1 of the arguments have not started", Dr.Gonsalves submitted.

"We can only request the High Court to hear this matter early and dispose them off. That is the only relief we can grant", Justice Rao observed.

"We cannot do anything once the matter is sent back to HC. We appreciate your concern", Justice Rao responded.

"Then send it back to another Bench. I am telling you frankly we do not have faith… What justice for Jamia students…what justice for Delhi riots people. Students were brutally beaten, heads were cracked...", Dr.Gonsalves submitted.

The bench then proceeded to dispose of the writ petition with the following order :

It may be recalled that in February 2020, dramatic developments had taken place in the Delhi High Court in a petition filed by civil rights activist Harsh Mander seeking FIR against politicians like Kapil Mishra, Anurag Thakur, Pravesh Verma and Abhay Verma for their alleged inflammatory statements before the Delhi Riots.

On February 26, 2020, a bench led by Dr.Justice S Muralidhar had played the videos containing the speeches of Kapil Mishra in the Court for the Solicitor General and had asked the Delhi Police to decide on registration of FIRs within a day.

The next day, the Delhi Police told the High Court that it has decided to defer the registration of FIRs as the situation was not "conducive" in view of the communal tension. Following that, a bench led by the Chief Justice of the Delhi High Court DN Patel adjourned the hearing by two months.

In the present petition, filed through Advocate on Record Satya Mitra, the petitioners submitted that on September 17, 2020, their matter was posted for final arguments. However, the bench led by Chief Justice DN Patel said that it will be taken by the Delhi Riots case after hearing the Jamia case. After that, the case got adjourned on several dates, and the matter has not got a listing after August 23, 2021, the petitioners submitted.