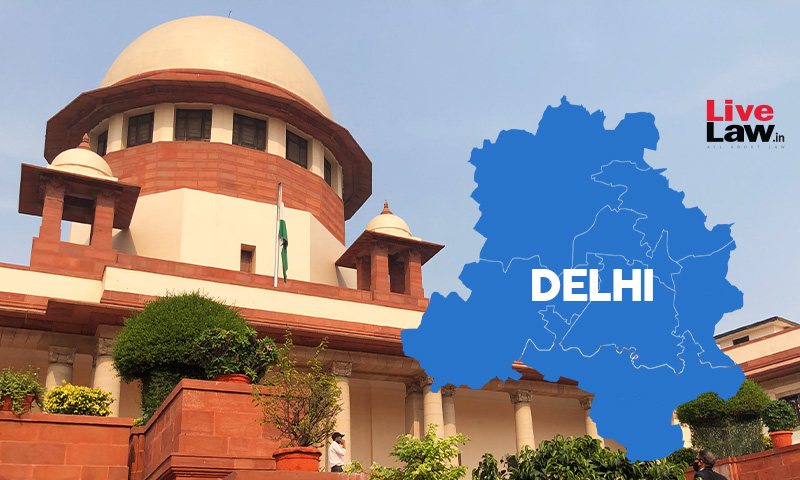 A 3-judge bench of the Supreme Court on Friday referred to a Constitution Bench limited questions pertaining to the legal dispute between the Delhi Government and the Central Government regarding the control over administrative services in the national capital.The Bench has directed the matter to be listed next Wednesday, 11th May 2022. A bench headed by CJI Ramana has observed that the...

A 3-judge bench of the Supreme Court on Friday referred to a Constitution Bench limited questions pertaining to the legal dispute between the Delhi Government and the Central Government regarding the control over administrative services in the national capital.

The Bench has directed the matter to be listed next Wednesday, 11th May 2022.

A bench headed by CJI Ramana has observed that the main contention relates to interpretation of phrases 'any such matter is applicable to UT's' and 'subject to provisions of this constitution' in Article 239AA 3a. However, it appears that all issues except one issue pending consideration has been elaborately dealt with by Constitution Bench in its decision of 2018. Therefore the bench did not deem it necessary to revisit those issues that stand settled by previous constitution benches

"The Limited question referred to this bench relates to scope of legislative and executive powers of NCT Delhi with respect to terms of services. The Constitution bench while interpreting 239AA didn't specifically interpret impact of wording of same with regard to entry 41 of state list. We deem it appropriate to refer above limited question to Constitution bench",the bench said.

A bench comprising the Chief Justice of India NV Ramana, Justice Surya Kant and Justice Hima Kohli had on 27th April 2022 reserved its orders on an application filed by the Union of India seeking referral to a Constitution Bench for a holistic interpretation of Article 239AA.

The writ petition filed by the Delhi Government last year challenging the GNCTD(Amendment) Act 2021 was also listed along with the main case (the 2017 case which was referred to larger bench by a 2-judge bench in 2019).

While reserving its orders, the Bench had observed that it will consider the submissions made by Solicitor General Tushar Mehta appearing for Union of India and Senior Advocate AM Singhvi appearing for Delhi Government and take a call. The Bench had opined that in case a Constitution bench is constituted, it would want the hearing to conclude by 15th May.

The Union of India submitted that referral to a Constitution Bench is necessary for a holistic interpretation of Article 239AA which is central to the determination of issues involved.

Solicitor General of India Tushar Mehta appearing for Union of India had submitted that on a bare reading of the 2017 order making reference to the Constitution Bench, it can be gathered that the terms of reference required all aspects of Article 239AA to be interpreted. The SG said that the 2018 judgment however did not address all issues relating to Article 239AA.

Constitution of India - Article 239AA - Power of Government of National Capital Territory of Delhi over civil services- issue referred to Constitution Bench - From the reference application moved by the Union of India, as well as the rival contentions of the parties, the main bone of contention relates to the interpretation of the phrases: "in so far as any such matter is applicable to Union Territories" and "Subject to the provisions of this Constitution" as contained in Article 239AA(3)(a) of the Constitution. On perusing the Constitution Bench judgment, it appears that all the issues except the one pending consideration before this bench, have been elaborately dealt with. Therefore, we do not deem it necessary to revisit the issues that already stand settled by the previous Constitution Bench-

Constitution of India - Entry 41 in State List- Article 239AA- The limited issue that has been referred to this Bench, relates to the scope of legislative and executive powers of the Centre and NCT Delhi with respect to the term "services". The Constitution Bench of this Court, while interpreting Article 239AA(3)(a) of the Constitution, did not find any occasion to specifically interpret the impact of the wordings of the same with respect to Entry 41 in the State List