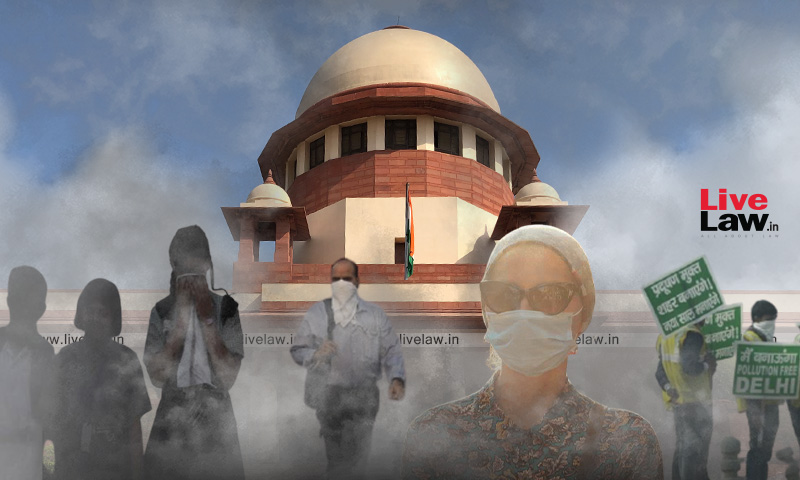 The Supreme Court on Saturday expressed serious concerns at the worsening air quality of Delhi, and asked the Central Government to take immediate measures to address the situation after discussing with the concerned state governments.The bench comprising the Chief Justice of India NV Ramana, Justice DY Chandrachud and Justice Surya Kant highlighted that there are other causes of pollution...

The Supreme Court on Saturday expressed serious concerns at the worsening air quality of Delhi, and asked the Central Government to take immediate measures to address the situation after discussing with the concerned state governments.

The bench comprising the Chief Justice of India NV Ramana, Justice DY Chandrachud and Justice Surya Kant highlighted that there are other causes of pollution than stubble burning, like vehicular pollution, firecrackers, dust control etc.

"...see some percentage of contribution is stubble burning, rest is pollution in Delhi, particularly crackers, industries, dust etc. Take immediate control measures.Tell us how immediately we can reduce AQI by 200 points. If required think of 2 days lockdown or something, how will people live?", the Chief Justice of India told the Solicitor General of India Tushar Mehta.

The CJI stressed that "we want to feel better in 2-3 days". "First see Delhi, then we will call other states, impose some strict measures", the CJI told the Solicitor General.

When Senior Advocate Rahul Mehra, appearing for the Delhi Government, mentioned the issue of stubble burning, Justice Surya Kant said, "now it has become a fashion to bash the farmers whether its Delhi government or someone else. There was a ban on firecrackers, what happened with that? What has been happening in last 7 days?What was the Delhi police doing?".

The bench adjourned the matter to Monday asking the Central Government to apprise the bench about the emergency steps taken to address the problem.

"It is the issue of burning..we have seen how bad the situation is..even in houses we are wearing masks", the Chief Justice of India said at the outset, highlighting the issue of worsening air quality of the national capital.  The CJI sought to know what are the steps taken by the authorities to remedy the situation.

The Solicitor General of India Tushar Mehta clarified that he is not taking any adversarial position neither against the petitioners nor against any state governments and everyone is "fighting the battle" in their own manner.

At first, the SG spoke about the issue relating to stubble burning.

"Over the past few days, there has been a spurt in stubble burning in Punjab, the result of which we are seeing. Punjab needs to buckle up. I am not making this adversarial", the SG said.

"You are projecting as if farmers are responsible...what about the Delhi people? What about the steps to regulate firecrackers, vehicular emissions?", the CJI asked.

The SG requested the bench to not take the view that farmers are responsible. "Your lordship knows the potential of this statement. Please don't take it that govt, state or centre is putting this on farmers. There's not a remote intention of suggesting that", the SG said. The SG said that he was taking the bench through the issues one by one, and other issues will be highlighted in the sequence. The stubble burning issue contributes to nearly 30%, the SG added.

"The problem of farmers is not of enforcement, but of incentivizing. If you make the incentives then why won't a farmer switch. You cannot enforce these things", Justice DY Chandrachud opined.

Justice Surya Kant said that the farmers are not in a position to afford the machines for stubble removal.

"You say 2 lakh machines are available. The poor farmers cannot afford to purchase those machines. Why does the State or Central Government not purchase the machines or take away the stubble?", Justice Surya Kant observed.

The SG said that the machines are made available at subsidized rates, with almost 80% subsidy. They are to give to farmers at subsidized cost through cooperative societies, he added.

The bench sought to know how many such societies are there and how many machines are supplied to farmers. The bench suggested that the sample of a district can be given.

"The question is of simple economy. If you take stubble from farmers and send to industries, it won't cost anything!", Justice Surya Kant said.

Justice Kant also added at one point, "I am a farmer, The CJI is also from a farmer family, we know it".

The SG then explained various measures contemplated to remedy the situation. The SG mentioned that statutory directions have been issued for the utilization of paddy stubble in thermal plants, which are eleven in number, within 300 kilometers radius of Delhi.

The bench sought to know if there is any mechanism at the ground level to collect the stubble from the fields and transport them to the thermal plants.

"We are hiring agencies and monitoring it.. tenders have been issued", the Solicitor General said.

Justice Kant said that after harvest, the farmer is under a compulsion to make the field ready for the next season, and hence there should be a speedy mechanism in place.

"This is late monsoon and it has been late for farmers.. now they are in a hurry to sow seeds for kharif season for wheat in winter. Was any agency enrolled to remove the stubble in the gap of 15 days. It is good that your officers have framed  this policy but how are you implementing it?", Justice Chandrachud sought to know.

The SG requested time till Monday to place on record the details.

80% cause of pollution caused by reasons other than stubble

The bench then commented that there are other causes of pollution than stubble-burning, which need to be addressed.

"You've to answer to the CJI's query,  how the 80% of pollution in Delhi is due to causes apart from stubble burning...What's being done for that?", Justice Surya Kant asked.

The CJI said that he does not want to comment about the exact percentage of contribution, but there are other causes of pollution as well.

"...see some % of contribution is stubble burning, rest is pollution in Delhi, particularly crackers, industries, dust etc. Take us immediate control measures.Tell us how immediately we can reduce AQI by 200 points.If required think of 2 days lockdown or something, how will people live?", the Chief Justice of India said.

"Post pandemic schools have been opened, we are exposing little children to this at 7 in the morning ! Like Dr Gulleria said, there's pandemic there's pollution!", Justice Chandrachud added.

"First see Delhi, then we will call other states, impose some strict measures. In two three days we want to feel better", the CJI stressed.

The CJI referred to a Times of India report which spoke about increase in stubble burning.

The SG said that as per the forecast, "we have to be watchful till 18th(November)".

A bench comprising the Chief Justice of India NV Ramana, Justice DY Chandrachud and Justice Surya Kant  was hearing a plea by an environmental activist Aditya Dubey filed seeking directions in relation to pollution caused in Delhi and adjoining areas due to stubble burning and other sources of pollution.

Background of the petition

Case Title : Aditya Dubey(Minor) Versus Union of India and others| WP(c) No.