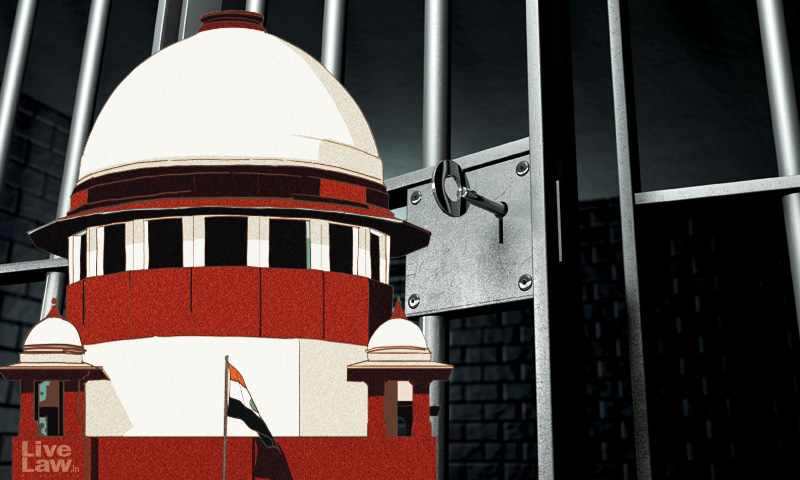 In a landmark judgment, the Supreme Court stressed the importance of the rule "bail over jail" and issued a slew of guidelines to prevent unnecessary arrest and remand.

The judgment in the case Satender Kumar Antil versus Central Bureau of Investigation, delivered by a bench comprising Justices Sanjay Kishan Kaul and MM Sundersh, acknowledged that jails in India are flooded with undertrials.

"Jails in India are flooded with undertrial prisoners. The statistics placed before us would indicate that more than 2/3rd of the inmates of the prisons constitute undertrial prisoners. Of this category of prisoners, majority may not even be required to be arrested despite registration of a cognizable offense, being charged with offenses punishable for seven years or less. They are not only poor and illiterate but also would include women. Thus, there is a culture of offense being inherited by many of them", the judgment stated at the outset.

The Court also said that the problem is caused mostly due to unnecessary arrests, which are carried out in violation of Section 41 and 41A of the CrPC and the directions issued in the Arnesh Kumar judgment.

"..it certainly exhibits the mindset, a vestige of colonial India, on the part of the Investigating Agency, notwithstanding the fact arrest is a draconian measure resulting in curtailment of liberty, and thus to be used sparingly. In a democracy, there can never be an impression that it is a police State as both are conceptually opposite to each other".

Bail is the Rule

The principle that bail is the rule and jail is the exception has been well recognised through the repetitive pronouncements of the Court. This is on the touchstone of Article 21 of the Constitution.

Presumption of innocence until proven guilty is another cardinal principle of criminal law.

"Once again, we have to reiterate that 'bail is the rule and jail is an exception' coupled with the principle governing the presumption of innocence. We have no doubt in our mind that this provision is a substantive one, facilitating liberty, being the core intendment of Article 21", the judgment stated.

Ultimate acquittal with continued custody a case of grave injustice

"The rate of conviction in criminal cases in India is abysmally low. It appears to us that this factor weighs on the mind of the Court while deciding the bail applications in a negative sense. Courts tend to think that the possibility of a conviction being nearer to rarity, bail applications will have to be decided strictly, contrary to legal principles. We cannot mix up consideration of a bail application, which is not punitive in nature with that of a possible adjudication by way of trial. On the contrary, an ultimate acquittal with continued custody would be a case of grave injustice".

The Court issued a slew of directions as follows :

a) The Government of India may consider the introduction of a separate enactment in the nature of a Bail Act so as to streamline the grant of bails.

b) The investigating agencies and their officers are duty-bound to comply with the mandate of Section 41 and 41A of the Code and the directions issued by this Court in Arnesh Kumar (supra). Any dereliction on their part has to be brought to the notice of the higher authorities by the court

c)The courts will have to satisfy themselves on the compliance of Section 41 and 41A of the Code. Any non-compliance would entitle the accused for grant of bail

d) All the State Governments and the Union Territories are directed to facilitate standing orders for the procedure to be followed under Section 41 and 41A of the Code while taking note of the order of the High Court of Delhi dated 07.02.2018 in Writ Petition (C) No. 7608 of 2018 and the standing order issued by the Delhi Police i.e. Standing Order No. 109 of 2020, to comply with the mandate of Section 41A of the Code.

e) There need not be any insistence of a bail application while considering the application under Section 88, 170, 204 and 209 of the Code.

f)There needs to be a strict compliance of the mandate laid down in the judgment of this court in Siddharth(in which it was held that investigating officer need not arrest each and every accused at the time of filing chargesheet).

h) The High Courts are directed to undertake the exercise of finding out the undertrial prisoners who are not able to comply with the bail conditions. After doing so, appropriate action will have to be taken in light of Section 440 of the Code, facilitating the release.

i) While insisting upon sureties the mandate of Section 440 of the Code has to be kept in mind.

j) An exercise will have to be done in a similar manner to comply with the mandate of Section 436A of the Code both at the district judiciary level and the High Court as earlier directed by this Court in Bhim Singh (supra), followed by appropriate orders.

l) All State Governments, Union Territories and High Courts are directed to file affidavits/ status reports within a period of four months.