Courts Must Ensure That Criminal Law Does Not Become A Weapon For Selective Harassment Of Citizens: SC In Arnab Goswami Judgment 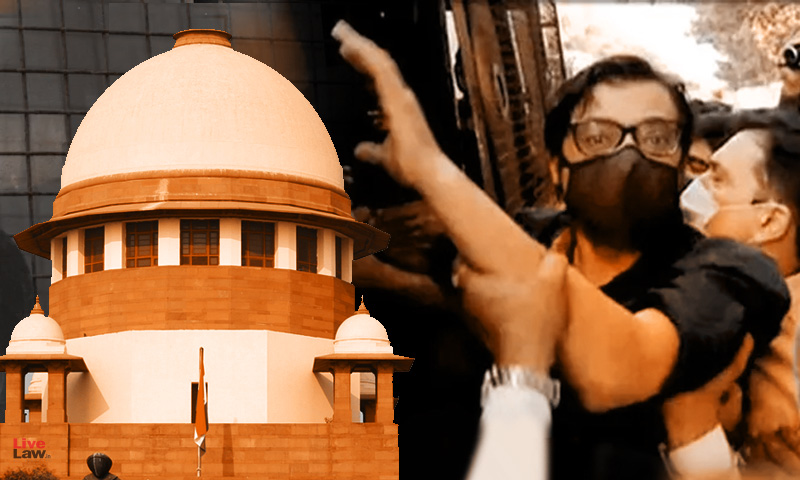 The Supreme Court while pronounsing a detailed reasoning behind the grant of release of Arnab Goswami has observed that that "criminal law should not become a tool for selective harassment of citizens".The judgment was pronounced by a Bench of Justices DY Chandrachud and Indira Banerjee today and the court remarked,"Deprivation of Liberty for a single day is a day too many.. "- Supreme...

The Supreme Court while pronounsing a detailed reasoning behind the grant of release of Arnab Goswami has observed that that "criminal law should not become a tool for selective harassment of citizens".

The judgment was pronounced by a Bench of Justices DY Chandrachud and Indira Banerjee today and the court remarked,

"Deprivation of Liberty for a single day is a day too many.. "

The bench noted that the interim orders shall remain in operation till further proceedings and it will be open to the parties to peruse further remedy.

The bench, while elaborating on the importance of human liberty and the role of courts therein added that the case of Goswami was that he had been targeted because his opinions on television are palatable to the authority.

In this context, court said that whether the appellant has established a case for quashing the FIR is something on which the High Court will take a final view when the proceedings are listed before it, but we are clearly of the view that in failing to make even a prima facie evaluation of the FIR, the High Court abdicated its constitutional duty and function as a protector of liberty.

Highlighting that the High Court did have the power to protect the citizen by interim order in the petition invoking Article 226, the bench added,

"Courts must be alive to the need to safeguard the public interest in ensuring that the due enforcement of criminal law is not obstructed. The fair investigation of crime is an aid to it. Equally it is the duty of courts across the spectrum – the district judiciary, the High Courts and the Supreme Court – to ensure that the criminal law does not become a weapon for the selective harassment of citizens. Courts should be alive to both ends of the spectrum – the need to ensure the proper enforcement of criminal law on the one hand and the need, on the other, of ensuring that the law does not become a ruse for targeted harassment"

Further justifying the role of courts in guaranteeing fundamental rights to its citizens, the bench stated that our courts must ensure that they continue to remain the first line of defense against the deprivation of the liberty of citizens.

The Justice Chandrachud led bench relied on celebrated judgment in State of Rajasthan, Jaipur vs Balchand, and added that in the case, Justice Krishna Iyer pithily reminded us that the basic rule of our criminal justice system is bail, not jail.

"The High Courts and Courts in the district judiciary of India must enforce this principle in practice, and not forego that duty, leaving this Court to intervene at all times. We must in particular also emphasise the role of the district judiciary, which provides the first point of interface to the citizen, the bench said.

"The consequence for those who suffer incarceration are serious. Common citizens without the means or resources to move the High Courts or this Court languish as undertrials. Courts must be alive to the situation as it prevails on the ground – in the jails and police stations where human dignity has no protector.... The remedy of bail is a solemn expression of humaneness in the justice system. We have given expression to our anguish in the case where the citizen has approached the Court"

Court also elaborated on the "Bail is Rule and Jail is the exception" established by Justice Krishna Iyer and noted that High Courts get burdened. Chances of incarceration is huge and the accused languishes as undertrial.

On November 11, the top court granted interim bail to Republic TV anchor Arnab Goswami,who was arrested on November 4 and has been under judicial custody since then in a criminal case relating to abetment to suicide of interior designer Anvay Naik in 2018.

The top court also allowed the interim release of the co-accused Neetish Sarda and Firoze Mohammed Sheikh in the case.

A vacation bench comprising Justices D Y Chandrachud and Indira Banerjee passed the order after an urgent hearing given to the petitions challenging the November 9 order of the Bombay High Court which denied the accused interim bail in the habeas corpus petitions filed by them challenging their custody.

During the hearing, Justice Chandrachud had expressed disappointment that the High Court failed to exercise its jurisdiction to protect the personal liberty of a citizen.

"If this court does not interfere today, we are travelling on the path of destruction. Forget this man (Goswami). You may not like his ideology. Left to myself, I will not watch his channel. Keep aside everything. If this is what our state governments are going to do to people who are to be nailed, then the Supreme Court has to intervene. There has to be a message to HCs- Please exercise your jurisdiction to uphold personal liberty. We are seeing case after case. HCs are failing to exercise jurisdiction. People are in jail for tweets!", he had remarked.