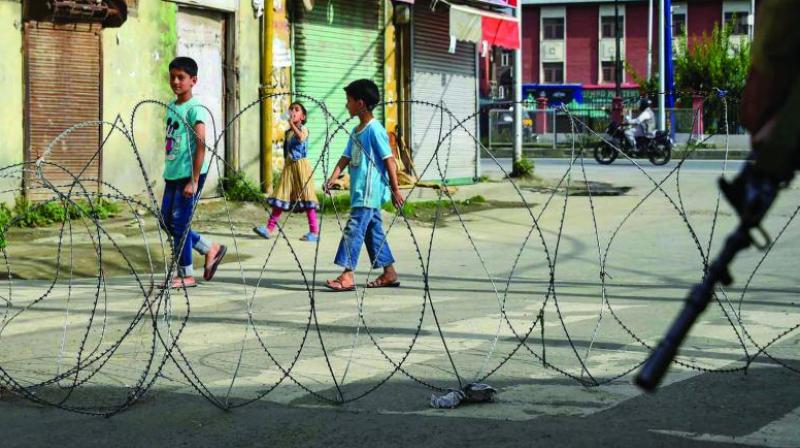 The Juvenile Justice Committee's report on the state of detained minors in the Kashmir Valley is "replete with" contradictory statement and betrays that the body has not applied its mind, child-activist Enakshi Ganguly told Supreme Court in her response.

"The JCC committee merely forwards the contents and conclusions of the Report submitted to it by the Director Gender of Police, without recording any finding of its own," says Ganguly's rejoinder pointing out passages from the JJC's report. The rejoinder alleges that a close reading of the JJC report shows that the DGP "has not categorically refuted the averments.... deny(ing) them repeatedly with many a flourish."

Ganguly's response to the JJC report pointed out further discrepancies and JJC's failure to verify stories, despite having ample resources to do so. The JCC also failed to take on record any hearings from other stakeholders and authorities or security body "was either directed to submit a report, nor did they do so of their own volition as parties implicated".

Citing the minutes of the Committee Report, the response pointed to Habeas Corpus Petitions filed on behalf of minors and bail applications on behalf of minors filed before the subordinate Court as excellent sources of independent verifications. For this reason, "the Juvenile Justice Board may certainly be directed to furnish copies of bail applications, as also of the FIRs produced before them," Ganguly said.

Her response added that, "the Child Welfare Committee, the Juvenile Justice Board, the Childline and the Integrated Child Protection Officer" should all be directed to produce "a written report and supporting documents."

"The aforesaid exhaustive record of all possible stakeholders in the matter is especially relevant, since none was called upon to give their account before the JJ Committee," the petitioner urged the top court.

By not producing the Juvenile Justice Board records and hearings from other stakeholders, the Committee was thus failing to "to serve the purpose of its exercise" as directed by SC," the response said. "The JJ Committee was tasked with verifying the averments in the Writ Petition. It could not have delegated the whole exercise to the DGP, without giving its own independent findings. Thus the mandate as given by this Hon'ble Court is not met and the JJ Committee has abdicated its jurisdiction," said Ganguly.

Her rejoinder puts forth numerous and independent reports from fact-finding teams, newspaper and video reports -- both domestic and international -- detailing excessive force being used against children, and that the kids were being moved to other states. "The Committee's Report itself annexes an Order in one such petition (of wrongful detention), directing enquiry into the age of the detenue, who is allegedly 14 years of age," the response pointed out.

It cited numerous such examples where "easily verifiable" stories had been seemingly swept under the carpet or not reflected in the DGP or Committee's report. "From listed Orders on the High Court website and from news reports we find that at least five to six petitions involving children were heard by the High Court, and at least three minors have now been released as a result. These detentions were not reflected in the DGP'S 144," the response said.

The DGP's also failed to answer the primary questions posed to him regarding any abuse/ beatings/ detention of children by security forces. "The (one-page) response merely states that 36 children were lodged in the juvenile observation home at Srinagar on various charges, out of which 21 have been bailed out," the response pointed out. Furthermore, several of the cases on the Committee's list were from before August 5, not related to juveniles, or domestic violence matters, said the report.

Objecting to the Committee having rejected of stories published in leading Indian dailies, without speaking to the victims or the reporters who continue to stand by their work as motivated lies, the response said "Their summary dismissal as false, motivated lies' would be to our own detriment and to the detriment of our Constitutional morality".

Ganguly has requested the court to direct the JJC to furnish bail applications, records of appointments with probation officers, and the FIRs registered against minors held in detention, along with any records of notices sent to the family of the arrested juveniles as per the law.

Pointing to several cases where minors were arrested without proper checking for their school ID cards, the rejoinder points out, "here are certainly other minors, illegally detained...who have fallen through the cracks and do not feature in the DGP's 144."

The DGP's list also showed that nine children had been preventively detained, which was against the law governing treatment of minors. Further 127 children are shown arrested, yet released on the same day. Of these 10 were booked for non-bailable offences, yet no bail orders were placed on record. "It is difficult to ascertain why FIRs were lodged against so many children, if as claimed, they had only been temporarily detained to keep them out of trouble, and as the records show they were to be let off on the same day," the response said.

Expressing urgency be exercised in this matter, Ganguly pointed out several news reports about children were being moved to jails outside the Valley.

Alleging that the DGP's Report itself said that Kashmir's climate was volatile, witnessing "instant and spontaneous protests and therefore certain liberties with right to liberty and expression have to be taken",Ganguly said that administrative principles of this nature were "wholly untenable constitutionally."

The response stated, "executive pragmatism would still have to be constitutionally tested on a case-to-case basis and cannot be allowed to become a policy, if even in the cause of national security." Adding that fundamental rights in Kashmir had not been suspended, Ganguly said, they "accrue to every naughty child in Kashmir. They cannot be overlooked on executive whim," adding that the Committe's report lacked "understanding" and "sensitivity" of laws governing juveniles.