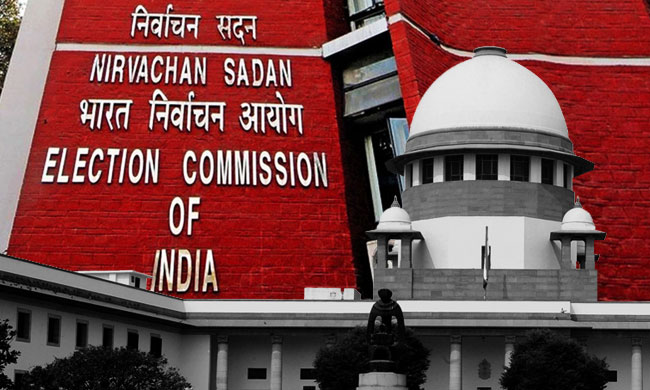 The Supreme Court on Tuesday issued notice to the Election Commission of India in a petition seeking to declare cash transfer schemes announced and implemented by governments close to elections as unconstitutional and corrupt electoral practices.The petition also seeks to direct the ECI to frame guidelines on declaration of freebies, welfare schemes etc. by governments when elections...

The Supreme Court on Tuesday issued notice to the Election Commission of India in a petition seeking to declare cash transfer schemes announced and implemented by governments close to elections as unconstitutional and corrupt electoral practices.

The petition also seeks to direct the ECI to frame guidelines on declaration of  freebies, welfare schemes etc. by governments when elections are around the corner.

The petition filed by Dr.Pentapati Pulla Rao, who had contested from Elluru constituency in Andhra Pradesh in the recent general elections as a candidate of Janasena party, cited the examples such as PM Kisan Samman Nidhi Scheme of Central Government and schemes announced of Governments of Andhra Pradesh, Telengana, West Bengal etc., which allegedly gave unfair advantage to the ruling party.

The PM Kisan Samman Nidhi Scheme proposed to transfer Rs.6000 to nearly 12 crore farmers in three equal installments. It came into operation from December 1, 2018, three months before polls were announced, and the second installment of Rs.2000 was transferred in April, in the middle of general elections. Likewise, the various schemes announced by the Andhra Pradesh Government were also styled such that the installment payments will be credited to the beneficiaries while the polls are going on, said the petitioner, an economist who had education from JNU Delhi and Chicago University.

Due to lack of guidelines by Election Commission of India, Andhra Pradesh has transferred Rs. 9400 Crores i.e., Rs. 10,000 each to 94 lakhs women self help group members in the name of Pasupu Kumkuma scheme. The program was launched in January, 2019 with a clear schedule to transfer money during the election process.  The governments of West Bengal, Jharkhand and Telengana have also executed similar schemes, the petition stated.

According to the petitioner, such cash transfers circumvent the Model Code of Conduct. A gift, offer or promise by a candidate or his agent, to induce an elector to vote in his favour would amount to bribery under Section 123(1) of the Representation of Peoples Act, 1951. The petitioner stated that cash transfer schemes carried out during polls come under the definition of 'corrupt' practice under the RP Act.

The petition referred to the 2013 decision of the Supreme Court in S Subramanium Balaji v State of Tamil Nadu which had directed the poll panel to frame guidelines to regulate grant of 'freebies' by governments close to elections so as to ensure a level playing field.

The petition also referred to the observation made by the Supreme Court in Election Commission of India Vs Rajaji Mathew Thomas that the intention of Model Code of Conduct was that "no action should be taken by a party in power in close proximity to the date on which the elections are announced so as to derive any benefit therefrom during the elections or to disturb the level playing field for all political parties involved in the electoral process".

"Due to non implementation of the judgment/orders of this Hon'ble Court, parties in power have been indulging distribution of cash from government exchequer by way of Direct Cash Transfer to influence the voters. The Direct Cash Transfer schemes implementation on the eve of election and even after announcement of election has resulted to influence the voters which has violated the equal opportunity to participate in the process of election guaranteed under the Article 14 and 21 of the Constitution of the India", Pulla Rao said in the petition, which was drafted by Advocate Sravan Kumar and filed through Advocate Hitendra Nath Rath.

The petition also alleged that cash transfers were made by Andhra Pradesh Government without any budgetary allocations, and this has resulted in  blocking the release of funds for salaries to the contract employees and various other essential expenditure in Andhra Pradesh.

"Article 112 and 202 of the Constitution of India only permits defraying of funds from the Consolidated Fund of the State for public purpose. But the parties in power in Respondent No.2 to 7 have spent the public money for their Political purpose to get electoral advantage over the opponents contrary to the mandate of the Constitution of India. Without allocating budget in 2019-20, schemes were launched before the elections to attract the voters/to pacify angry farmers", alleged the petition, which has arrayed the Governments of Centre, Andhra Pradesh, West Bengal, Jharkhand, Odisha, Telengana and Karnataka as respondents.

The petition sought a direction to fix minimum time preferably six months to implement schemes which have impact on free and fair elections such as Freebies, Direct Cash Transfer schemes, welfare schemes etc by Political parties in power before announcement of the election schedule.