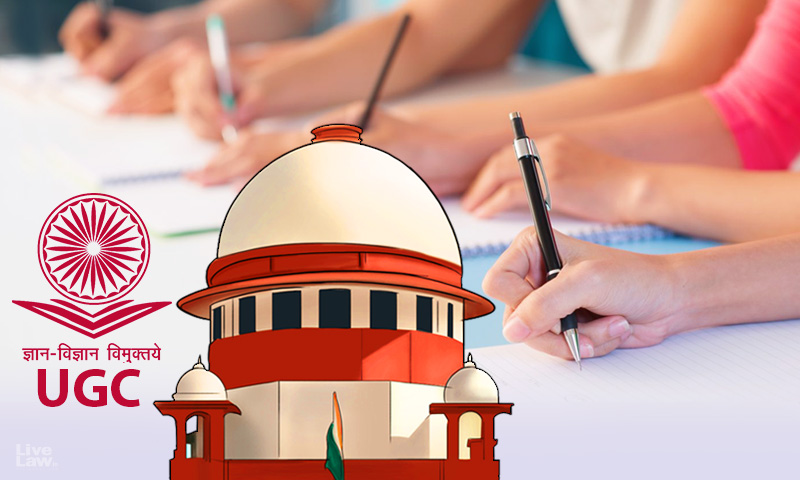 The University Grants Commission has told the Supreme Court that the direction to hold final year examinations by September 30 was issued to "protect the academic future of students".It further stated that conducting examinations for final year students is necessary to test them on "specialized elective courses" studied by them during the terminal year. "The final year or the last...

The University Grants Commission has told the Supreme Court that the direction to hold final year examinations by September 30 was issued to "protect the academic future of students".

It further stated that conducting examinations for final year students is necessary to test them on "specialized elective courses" studied by them during the terminal year.

"The final year or the last two semesters of a course/ programme consist of primarily Discipline Specific Elective (DSE) courses, Generic Elective (GE) courses and Skill Enhancement courses (SEC) to provide value-based and/ or skill-based knowledge. Consequently, performance in examinations, especially final year / terminal semester examinations, gives confidence and satisfaction to students and is a reflection of their competence, performance and credibility that is necessary for global acceptability," claims the Commission in its common reply to a batch of petitions challenging its Guidelines which made it mandatory for universities to conduct their final year exams by September 30.

The concerns of the Petitioners and the various State Govts have been more than adequately addressed by the UGC', stated the affidavit  seeking dismissal of all petitions.

The conduct of terminal exams is a "time-sensitive" issue and the decision was taken after due deliberations with experts following MHRD guidelines, it said denying that the decision was arbitrary

Four petitions were listed before the Top Court on Monday, seeking quashing of the notification dated July 6 by Ministry of Human Resources Development and the subsequent UGC Guidelines mandating conduct of examinations for final year students by September 30.

UGC has pointed out that even the Central Government, through the Ministry of Home Affairs has permitted the conduct of final year/ terminal semester examinations by universities. Further, the impugned Guidelines were issued by it under Sections 12 (Functions of the Commission) read with 26 (Power to make regulations) of the UGC Act, and are binding on all Universities.

In this backdrop, it is contended that the decision of certain State Universities to either cancel the exams or to graduate such students and confer degrees without appearing for the final year exams is plainly contrary to the Guidelines.

Rejecting the concerns raised by the Petitioners regarding safety of students, staff etc., the Commission has submitted that it has provided ample options to the Universities to permit appearance of students in examinations via online/ offline mode, "to protect the academic and career interests of students while at the same time, safeguarding their health".

"UGC's Guidelines dated 06.07.2020 adequately account for the evolving situation of the Covid- 19 pandemic because they: (a) provide sufficient time till the end of September 2020 to conduct the final year / terminal semester examinations after following the prescribed protocols and procedures relating to Covid-19; (b) give sufficient flexibility to universities/institutions to conduct such examinationsin online, offline (pen & paper) or blended (online + offline) mode; and,(c) provide for an examination throughspecial chance for students who "for whatsoever the reason(s) may be" are unable to appear for the examinations conducted by a university/institution by end of September 2020. The universities/ institutions may conduct such special examination as and when feasible so that the students concerned are not put to any inconvenience or disadvantage. Therefore, the concerns of the Petitioners and the various State Governments have been more than adequately addressed by the UGC," the Counter reads.

The UGC said that the deadline of September 30 was fixed based on "experience of experts" and that the choice of deadline cannot be considered arbitrary by the Court.

BREAKING : #UGC files affidavit in SC stating that direction to conduct final year exams by September 30 was issued to "protect the academic future of students", while keeping in mind their "health and safety".#StudentsInSCForJustice#UGCGuidelines @AUThackeray @advocate_alakh pic.twitter.com/iAisX0Ys7K

In a related development, an intervention application has also been filed in the matter by a Pune-based professor who has argued that the impugned UGC guidelines do not violate the fundamental rights of the students and there is no risk to the life of the students, staff and other members of the society as the Commission has permitted conducting of online exams also.

Update : Students have filed a rejoinder to the UGC affidavit, refuting its arguments. It may be read here.