Direction To Transport Back Stranded Migrants In 15 Days Is Mandatory : SC 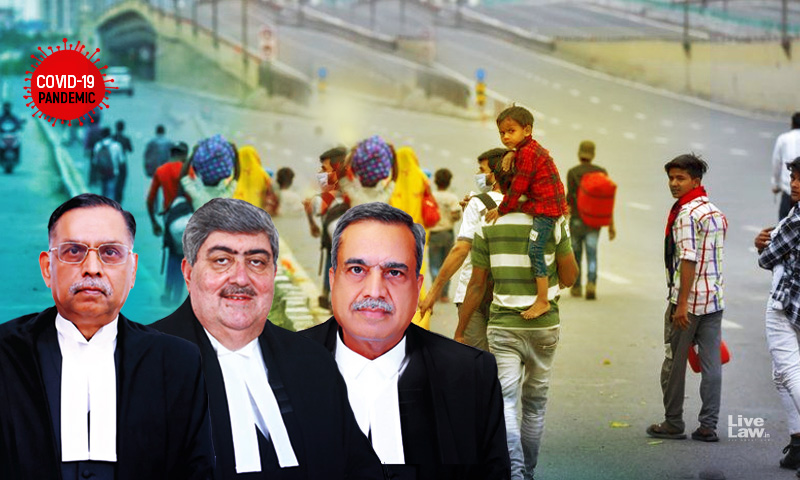 The Supreme Court on Friday clarified that its June 9 order for transportation of migrant workers to their hometowns within 15 days was mandatory.A Bench comprising of Justice Ashok Bhushan, SK Kaul and MR Shah made this clarification in the suo motu plea pertaining to the plight of migrant workers who had found themselves in dire straits due to the nation-wide...

The Supreme Court on Friday clarified that its June 9 order for transportation of migrant workers to their hometowns within 15 days was mandatory.

A Bench comprising of Justice Ashok Bhushan, SK Kaul and MR Shah made this clarification in the suo motu plea pertaining to the plight of migrant workers who had found themselves in dire straits due to the nation-wide Coronavirus-induced lockdown.

Justice Shah noted that an Order passed by Karnataka High Court yesterday had stated that the 15 days period set by the Supreme Court was not mandatory. In this regard, Justice Shah said,

Today, Senior Advocate Gopal Sankaranarayan submitted to the Bench that on June 10th, the Government of India had released a list of trains which were to be used for transporting migrant workers. However, the migrants were being charged for utilising the same.

Solicitor-General Tushar Mehta objected to this submission saying that he had not been given the copy of Sankaranarayan's Application. He further stated that that Sankaranarayan had failed to acknowledge that over 1000 migrants had been transported after they received a letter wherein Sankaranarayan had asked for transport between Mumbai and Uttarakhand.

Sankarayan responded to the assertion, submitting that he was appearing for the NLU Alumni and had been on the ground every day; there was only so much that they could do. He further added that it had to be made clear that the Centre would pay for the transportation and not the States as some States did not have the requisite funds.

The Bench, however, informed the Senior Counsels that they would hear the Application in July, as it had been previously directed. They also stated that issue at hand was the fact that migrant workers were being asked to pay.

"Our Order was that migrants will not pay. Whether Centre pays or the State pays, is not the issue here."

The hearing continued with Senior Advocate Indira Jaising apprising the Court regarding the information being sought from the migrants for allowing them to travel. She submitted that the same was excessive and therefore, defeated the letter and spirit of the previous order of the Supreme Court.

"Nothing being done. No ads in vernacular languages, no publicising of My Lords' orders by State Governments for benefit of migrant workers."

At this juncture, the Bench directed the SG to instruct the Counsel for State of Karnataka to transport all migrants within 15 days.

The matter is now listed for hearing in the second week of July.

At the previous hearing, the Bench had given the following directions:

1. All States and Union Territories had been directed to identify stranded migrants and transport them back to native places within 15 days;

2. States had to consider withdrawal of all cases filed against migrants under Disaster Management Act for lockdown violations, for attempting to walk to native places, crowding at stations etc.;

3. In the event of demand of Shramik trains, the railways were directed provide trains within 24 hours;

4. Provide all schemes to migrant workers and publicise them. Help desks to be established to help migrants to avail employment opportunities;

5. Centre and states to prepare a list for identification of migrant workers in a streamlined manner;

6. Employment relief to be mapped out and skill-mapping to be carried out for migrants;

7. Counselling centres to be established to find a way back for return travel, if they want to.